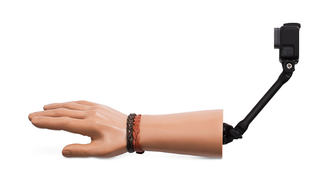 It is April 1st and this usually means that it is time for a bit of foolery.... But in the midst of this awful pandemic, coming up with a new joke story seems slightly off key – even if we could all do with at least one thing to smile about. So what we have done instead, is to look back and times and have dug out some of our favorite photographically-themed April Fools from the past.

There have been some great April Fool's stories run in the history of photography. We remember one from the 1980s when Olympus claimed that photography had been first discovered by a Japanese monk in the 18th century, over a hundred years before Daguerre and Fox Talbot. And there was the one about the 16-2000mm zoom for your SLR that a magazine reported was going to go on sale from April 1st.

But in recent years the internet has brought a new level of sophistication and fun to the April Fool prank – as you can reach more people with on the right day, and support your fictitious tales with links and videos.

We have trawled through the last few years to bring you what are five our our favorite April Fool stories for photographers...

Everyone just wishes that this one were true... and this was therefore an inspired news story from The Phoblographer on 1 April 2018. Fujifilm, Kodak and others have all been re-introducing silver halide films that they had previously discontinued. But the death of Kodachrome back in 2009 was a particularly painful one for professionals and enthusiasts that had cut their teeth on this classic yellow-boxed emulsion.

'Rejoice, photographers: those of us who never got to shoot Kodak Kodachrome seem to be getting a chance after all. Almost 10 years after the company announced the death of the beloved film emulsion, Kodak is letting the world know that Kodachrome is indeed going to be returning to shelves very soon after Ektachrome hits stores...' so the news piece went. If only it were true... but the specialist chemistry used to develop Kodachrome, which was done in a handful of Kodak sites around the world, is reason enough why this analog reincarnation will never come to pass.

• 10 things we remember about Kodachrome

This one dates from 2014 from the fun-loving crew at Lomography. Instant cameras were at that point starting their meteoric return to people's affection - and Lomography had entered the market with its own retro-inspired range of instant print models. But this Fool's jape involved the idea that they were launching an underwater instant camera, that spurted out the prints as you swam around in the pool or sea. Called the Lomo'Instant Caribbean it even had its own launch film to make the idea that bit more credible...

'Following the incredible response and enthusiasm on our Kickstarter campaign, we are thrilled to say “Ahoy mateys!” with the release of the Lomo’Instant Caribbean Edition! The world’s first and only dedicated underwater instant camera, the Lomo’Instant Caribbean Edition opens the door to the exciting world of underwater instant fun. Test the waters and take it for a dive with the turtles in Barbados or catch the waves on your next surf trip in Maui!' – so the fiction began.

This is one of the most sophisticated April Fool tomfooleries of recent years. The RE-35 was an ingenious hoax that claimed that a company had invented 35mm canisters that would bring digital imaging to your old analog SLRs. The canisters came with their own patented scratch-resistant Flexisensor that pulled out to replace the silver halide film, and then recorded the image onto the digital memory. The RE-35 canister then hooked up to your computer using a convenient USB connection.

A pop-up message on the website page now explains all: "Some things are too good to be true! Re-35 does not really exist. We (the design company Rogge & Pott) created Re-35 as an exercise in identity-design. We invented the "product" because it was something, that we had wished for for a long time (as many others).

We launched the website and sent out "press releases" on April first - thinking, that the date would make clear, that Re35 is just wishful thinking - a classic April Fools Prank!"

With over four million Instagram followers, Murad Osmann's #FollowMeTo project has become well-known the world over - and much copied by others. But the trouble with this style of selfie is that you need a friend or assistant to be able to get this type of portrait, that shows you holding hands with the person holding the camera.

GoPro's April Fool solution last year was to suggest a new addition to the army of exisiting GoPro accessories.

"We've all been there: picturesque view, perfect light, exotic location...but you're solo. It's just you and your GoPro. Sure, you can frame in a nice landscape shot, or even snag a classic selfie, but expectations are looming," so read the 2018 GoPro news release. "Your parents have been hounding you for years about settling down with "the one," and lately, even your friends are starting to drop subtle jabs about your choice for independence. Why not continue to enjoy the journey alone while giving the impression of companionship? Introducing Armie, the ultimate mount for living up to expectation." Not bad for $59.99... would it actually be anything more than pure fantasy!

Head back to 2013 and The-Digital-Picture.com came up with a great idea for the 10% of the population that are left-handed. It was the 'news' that Canon was introducing a new special-edition of its EOS 7D DSLR, which had the grip on the left-hand side of the body rather than on the usual right-hand side, offering 'reversed ergonomics' for long-suffering southpaws.

"Canon has been a world leader in innovation for over 65 years - and the EOS 7D L is another innovative product that we are proud to have associated with that heritage,” said the made-up company executive.

A-Z of camera effects: 26 effects every photographer should know