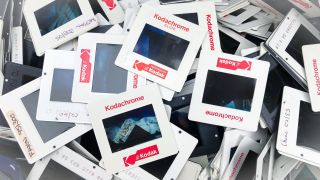 It is ten years since Kodak announced that it was to stop producing the last of  its iconic Kodachrome transparency films. It was on 22 June 2009 that the Eastman Kodak Company broke the news from its headquarters in Rochester, New York, that the much-loved slide film would stop production after a run of 74 years.

But a decade on, Kodachrome still holds a legendary status in the history of photography. To mark the 10th anniversary of Kodachrome's demise here are ten things about the yellow-boxed film that you may or may not know…

Kodachrome was invented by two friends Leopold Godowsky and Leopold Mannes. Their quest for coming up with a better color film started, the story goes, with being really disappointed in the color quality of a film they saw together in 1917.

The two were professional classical musicians - but as university-trained scientists and amateur boffins they both worked away at trying to come up with a better color film stock. By 1922 they have secured financial backing to set up their own dedicated laboratory, and in 1930 joined Kodak to create a marketable film. In later life, they both went back to being musicians.

Kodachrome was launched in 1935 - initially just as a 16mm movie film format. The first stills version of the film was released the following year.  Kodachrome movie film ceased manufacture in 2006.

The secret to Kodachrome's success is that it used a different process to other color film. The film did not contain the color dyes, unlike its rivals. Instead Kodachrome had three different monochrome layers - to which the three primary colors were added with dye coupleer during a complex chemical development.

The name Kodachrome predates film as we know it. Kodak had used the brand name on a film that it had released 20 years earlier in 1915. The subtractive process for this now-forgotten film was invented by John Capstaff in 1913.

5. A question of speed

The original Kodachrome movie film had an film speed of ISO 10 (or 10 ASA, if you prefer).

The daylight-balanced ISO 25 and ISO 64 versions of the film that older readers will remember were introduced as Kodachrome II in 1961. These were later rebranded as Kodachrome 25 and Kodachrome 64. Commonly called just K25 and K64, the ISO 25 version ceased production in 2001.

Although best known for its 35mm versions, Kodachrome was also produced at different times in 126, 120 and 110 stills formats – as well as in various movie and cine film formats.

Paul Simon released his song 'Kodachrome' in 1973, which was the lead single on his third solo album There Goes Rhymin' Simon. The song features the prophetic line 'Please Mama don't take my Kodachrome away'.

Those who lived outside the USA bought Kodachrome with prepaid envelopes – which you used to get send off to get developed at one of Kodak's specialist labs across the world. The film got sent back to you a week or two later in the mail mounted and packaged in yellow plastic boxes.

US photographers also got these mailers up until 1954 when the US government ruled that Kodak's monopoly on Kodachrome processing was anti-competitive. Other photofinishing labs were allowed access to the chemistry - and photographers chose which lab they wanted to use and paid separatel.

For photographers, the news piece put out by The Phoblographer on 1 April 2018 has to be one of the best April Fools ever. Hot on the heels of the real news that Kodak Ektachrome was making a comeback, the story announced that Kodachrome would be making a comeback too...

'Rejoice, photographers: those of us who never got to shoot Kodak Kodachrome seem to be getting a chance after all. Almost 10 years after the company announced the death of the beloved film emulsion, Kodak is letting the world know that Kodachrome is indeed going to be returning to shelves very soon after Ektachrome hits stores...' so the fake news piece went.

It was just too good a story to be true...

The production of Kodachrome stopped in October 2009, but Kodak had made sure that there were plans to ensure that remaining rolls of the emulsion could be processed after that date. Kansas-based processing lab Dwayne's Photo continued to offer developing services for the film through to January 2011.

The final hours of the lab's Kodachrome service are depicted in the 2017 Hollywood road movie Kodachrome - in which Ed Harris plays a famous documentary.photographer who is on a mission to get his last films processed by the deadline.

The last every roll of K64 was famously shot by Magnum photojournalist Steve McCurry - who had used Kodachrome for over 30 years to take many of his most famount images, including the iconic portrait of the Afghan Girl.

10. A comeback for Kodachrome?

Could Kodachrome make a comeback? With the advent and advances in digital photography, film sales plumetted during the early part of the 21st century. Not only did professionals and enthusiasts move over to using digital cameras and re-usable memory cards - but the masses abandonned compact cameras in favor of pocketable multi-function camera phones.

But this rise needs to be put in context. “The film market peaked in 2003 with 960 million rolls of film, today it represents roughly 2% of that,” said Manny Almeida, president of Fujifilm’s imaging division in North America in a Time interview in 2017.

Even so, only last week Fujifilm announced they were bringing back black and white film just 12 months after killing it off - so the comeback is still alive.

Could Kodachrome also rise from the ashes? The complex chemistry needed for its development undoubtedly mean that this is one film that we won't see being re-introduced. But we may still dream of a miracle revival…