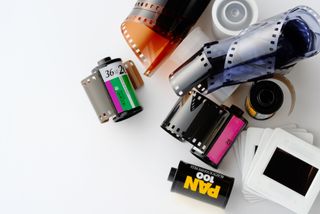 Film photography is like that pesky T-Rex in Jurassic Park that keeps on coming back, refusing to die. No-one's going to argue that digital cameras reproduce scenes with more accuracy and detail than was ever possible before, so why is film even still here?

Maybe it's because it has something that some photographers want. It's awkward, it's variable, it's difficult, but it has a kind of earthy physicality that makes otherwise sensible journalists resort to poetic similes like that one.

So maybe you're a film photographer who's gone digital and misses the old days of silver halide, maybe you're a hipster type who's seen that analog film can produce a randomness and a timelessness you can't get from digital, or maybe you just like using older, simpler, more involving cameras?

The good news is there there is still A LOT of film out there, with no sign that it's going away any time soon; in fact, new 'artisan' films are popping up all the time.

So what film types are out there, what film cameras are supported and what should you look for?

What types of film can you get?

Transparency film or slide film used to be the favorite for professionals because you don't have an intermediate printing stage to lower the quality and add to the cost, and you could send slides off to editors and picture libraries. But the range of transparency films has thinned out. You can still get dear old Velvia (well, it's certainly dear now) and a couple of others, but there's not much else. Now that Kodachrome is gone, all slide film uses the E-6 process widely available in labs.

Color negative film used to be reserved for family snapshots or commercial photographers producing print packages for clients. But now that most photographers will be digitising their analog images at some point, and it's relatively easy to handle the orange mask and negative tones of color negs, this is a good alternative to transparency film – and there's much more choice out there now, too. You can get color negative film developed using the C-41 process available in labs everywhere.

Black and white negative film is going from strength to strength. You can still get most of the old favourites from Ilford, Kodak and Fujifilm, but there are lots of lesser-known specialist films still in production. Most black and white films allow for a variety of processing solutions and kits that can be used at room temperature at your kitchen sink, so we refer to this processing generically as 'Black and white' in our guide.

What types of film camera are there?

You can read our massive Best film cameras in 2020 guide to find out, but broadly they split into three types: 35mm, medium format and large format cameras. 35mm cameras are the most common, so that's what we'll start with, but medium format cameras are popular too as they offer better quality from their larger negatives and easier high-quality scanning with a flatbed scanner.

Large format cameras are specialised tools used by particularly dedicated photographers. The cameras are large, expensive and complex to set up. Film is supplied in sheets and has to be pre-loaded into holders for swapping plates out in the field. Every exposure is an occasion, but that's part of the charm (that and the extraordinary image quality) for large format camera fans.

This guide doesn't cover every 35mm film on the market because there are way too many, even now, but it does list old favorites, top choices for different types of photography and some wacky newcomers for hipster photographers. We've split them into color transparency films, color negative and black and white films. By the way, 35mm film is often referred to as '135' followed by the number of exposures.

Availability is becoming patchy, but it's a classic everyone should try once

Velvia has gained a reputation as the world's richest, most super-saturated and sharpest color transparency film ever. Kodachrome used to carry that crown, but it looks positively restrained by comparison. Not everyone loves Velvia 50's strong colors and contrasts, but it's now gained immortality among Fujifilm's digital Film Simulation modes.

Like Velvia 50, but a stop faster and a bit more usable

$21.97
View at Amazon
$324.99
View at Amazon
See all prices (3 found)
Super-saturated colors
Faster than Velvia 50
Not terribly natural-looking
Getting expensive

Velvia 100 arrived as Velvia 50's more responsible, more usable sibling. It's one f-stop faster, which makes it a fraction easier to use if the light's not good, and the colors are perhaps a bit more natural-looking than Velvia 50's, but there's not much in it. Both films use widely-available E-6 processing, unlike the other old favourite, Kodachrome.

This film has just been revived by Kodak (the new Kodak film-making spin-off following the break-up of the old company). It offers the same ISO rating as Velvia 100, but you might find it has slightly less exaggerated colors. It uses the same generic E-6 transparency processing chemistry, though, so getting your films developed shouldn't be a problem.

Kodak claims the world's finest grain for a color negative film, thanks to its T-Grain technology. This film also boasts high saturation and sharpness, and Kodak says it's ideal for scanning and enlarging. Its rendition looks ideal for commercial and landscape photography, and it's cheaper than shooting transparency film.

Popular with portrait photographers for its smooth and subtle skintones

$39.99
View at Adorama
$45.88
View at Amazon
See all prices (3 found)
Optimised for portraits
Designed with scanning in mind
Regular C-41 processing
Available in lots of sizes

Kodak says Portra 160 is designed with fine grain for scanning and enlargement in a digital workflow. It's one of three films in the Portra family (there are Portra 400 and 800 variants too) and it's designed for smooth and natural skintones, and for a variety of work from portraits and fashion to commercial photography.

This film is designed for versatility and reliability, so if you're shooting wedding, portrait or fashion photography in quickly changing conditions, it could be worth the trade-off in image quality You can expect to see noticeably more grain than with slower emulsions, though this may actually enhance the 'analog' feel.

Ilford's XP1 'chromogenic' film caused quite a stir when it first appeared, offering black and white photographers the exposure latitude and easy lab processing of colour negative film, with smoother, finer grain than other ISO 400 mono films. The updated XP2S is still an interesting option for 35mm black and white fans who like latitude and not grain!

What can you say about Kodak Tri-X? Made famous by a generation of documentary and war photographers, it's pretty tolerant of exposure variations and push/pull processing and produces strong gritty images with good detail rendition. Maybe a bit rough-and-ready for today's tastes, but it still has 'the look'.

Ilford's latest version of its classic fast film, which can be developed in traditional black-and-white chemistry. It is a great all-round film, suitable to those who just want to try monochrome – or for those who are looking for a film that will respond well to push processing for lowlight use.

Lomography is one of the main driving forces behind the film photography revival. And as well as producing its own range of beautifully-designed Lomo cameras, it also has a range of films too. This black-and-white film has been given a twist with imaginative branding – and is sold in three-roll packs.