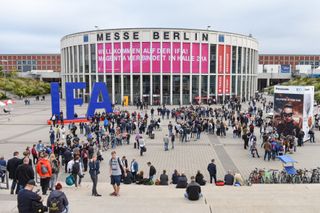 The annual IFA – Consumer Electronics Unlimited expo is heating up the streets of Berlin this week, with keynotes taking place on 04 and 05 September before the show opens its doors proper from 06-11 September.

Though it's not specifically a photography oriented event, some of the big players in imaging technology will be attending – the likes of Sony, Panasonic, Sharp and Honor/Huawei – so we expect some big showings and potential announcements!

Europe's biggest technology show, IFA is a bit like the annual CES event in Las Vegas, but with a distinctly German flavor. The show traces its roots to 1924 when it was just a humble radio expo, evidenced by the IFA's full name: Internationale Funkausstellung, "International Radio Exhibition".

Today it's one of the biggest consumer electronics conventions in the world, and we expect some serious new technology to be on show – particularly in the world of photography and imaging.

With everything from new image sensors to 8K video to the latest developments in 5G, there's plenty to get excited about. Here's what has been announced at the show already, followed by some educated guesses on things we'd be excited to see…

Okay, this one isn't technically an IFA 2019 announcement, since Nikon isn't actually exhibiting at the show. But Nikon did choose IFA press day to announce the arrival of  its new flagship DSLR, the Nikon D6.

There is not much detail in the announcement but the Nikon D6 rumors pack all manner of improvements, including a new sensor, in-body image stabilization inherited from the Nikon Z6 and Nikon Z7, as well as dual CFExpress slots – and, coincidentally enough, SanDisk CFExpress cards just so happened to go on sale this week.

Also announced by NIkon at the same time is the development of a monster 120-300mm f/2.8 professional lens to work with the D6 and other Nikon DSLRs. And lest its mirrorless Z range be forgotten, Nikon also unveiled the full spec, details and price for the Nikon Z 24mm f/1.8 S prime lens.

Samsung has revealed the Samsung Galaxy Fold… again. The new, non-breaking version of the troubled handset is available now in the manufacturer's home country of South Korea, with releases in "select" countries to follow.

Its revised construction aside, the Samsung Galaxy Fold remains the same as last we saw it, right down to its Cosmos Black and Space Silver color options, and on paper at least could still be one of the best camera phones – especially with a 5G version in certain territories.

Also on show is the new affordable 5G phone - the Samsung Galaxy A90 5G.

If looks could kill, the Kodak Smile Classic Instant Print would be culpable for murder. Its beauty isn't just skin deep, however – it features a pop-up viewfinder, a microSD card slot, Bluetooth connectivity and augmented reality functions.

The Kodak Smile Classic Instant Print produces the largest prints in the company's instant range. Its 3.51 x 4.25-inch Kodak Zink Sticky-Backed Photo Paper prints from the camera after a picture is taken, and images can also be printed from your smartphone using the Kodak Instant Print Companion app.

Available on both Android and iOS, the Print Companion app enables you to embed a 30-second video clip (with sound) from your media library – when you print it out, anyone with the Print Companion app will be able to view the video by holding their smartphone over the picture. Will this snazzy number be a contender for the best instant camera crown?

The Huawei Mate 20 X 5G is a niche device for power-users after the biggest phone they can get. This suped-up 5G version of the Mate 20 X boasts a similar Leica triple lens system, but it’s an outrageous and immersive 7.2-inch OLED screen that really impresses.

It's a visually stunning device to behold. That’s purely because of its immense size and massive 7.2-inch screen. It’s a whopper. It’s also an OLED, and looks fantastic close-up, boasting lush color and deep black, though its resolution is merely 1080p. At least that should save on battery.

When it comes to optics, there’s not much that’s new on the Mate 20 X, which uses – in Huawei’s own language – “tried and tested hardware”. It’s actually the same Leica three-lens camera set-up and CMOS sensor as found on the Huawei Mate 20 Pro, that being a primary 40MP camera, a 20MP wide-angle sensor and an 8MP telephoto sensor.

Designed as a gaming-oriented phone, the result is that the Asus ROG Phone II is an absolute powerhouse – including in the photography stakes.

The device comes in two editions, Elite and Ultimate – and the latter is loaded up with a monstrous 1TB storage, supports up to 2Gbps mobile data download speeds, and packs a combined 85MPs across its front and rear cameras.

Everything from the battery through to the screen experience and camera are flagship-grade. After our hands-on we can confirm that it’s big, it looks angry and it has specs and accessories like no other.

Sony's new flagship camera phone has unveiled with a triple camera array that takes advantage of the Eye AF system that we love so much on Sony cameras. The phone uses a weird 21:9 aspect ratio, that may well put some off. Check out our full Sony Xperia 5 hands-on review.

We all knew it was coming. Recent weeks saw the launch of the Motorola One Action – complete a wide-angle video camera – and leaks were plenty about the launch of the brand's photography-centric smartphone way before it was officially announced at IFA 2019.

So why were we so excited to get up close to this 6.4-inch handset? A quad camera system and a massive 10x hybrid zoom, that's why, and all for a low price of just $449 (from motorola.com for AT&T or T-Mobile) or in the from £379 (only from Amazon and with the Alexa voice assistant integrated).

Check out our hands-on Motorola One Action review to see what we made of this much-anticipated device!

Gimbal specialists Feiyu Tech have been teasing that they will unveil the Qing at the show - a motorized pan/tilt head that can take the weight of a full-frame DSLR. The exciting bit here is the remote control that has a built-in LCD screen. The head was shown as a prototype at IBC earlier in the year, but we are promised full details at IFA - but you can watch the teaser video on YouTube now.

The Sigma fp (which apparently stands for "fortissimo pianissimo") the new camera will feature a 24.6-megapixel sensor and it will use a classic Bayer color filter array, not Sigma's own multi-layer Foveon technology as we had originally believed the company to be working on.

Designed to be the smallest and lightest full frame mirrorless camera ever, it will take interchangeable L-Mount lenses (including three new L-Mount lenseslaunched at the same time as the Sigma fp) and is designed to break the pattern of current camera design. Sigma's idea is "how a camera can be", not conforming to current categories and hierarchies.

With the company exhibiting at IFA 2019, it seems a shoo-in that the Sigma fp will be there to play with.

One of the devices we were most excited to see at IFA 2019 is the Sharp 8K Video Camera, and we had hoped to get hands-on with at the show since Sharp has been very forthcoming in letting the press take the camera for a test drive. But sadly, the camerar was nowhere to be seen on their stand... even though they had a large area devoted to 8K, and were showing its humungous 120-inch 8K LCD TV

Boasting a breakthrough 33MP Micro Four Thirds sensor, a 5-inch(!) touchscreen and 10-bit 8K at 30 frames per second, this camera has serious potential for cinematographers – especially as it out-rezzes the recent pair of 6K cameras, the Blackmagic Pocket Cinema Camera 6K and the Panasonic Lumix S1H.

We now hope that we will be able to get more details on this at IBC 2019, the huge broadcasting show which takes place in Amsterdam next week.

Sony has been blasting out new cameras recently, with the Sony A7R IV, Sony A6100 and Sony A6600 all being announced over the past few weeks – and all of these will no doubt be proudly on display in Berlin.

There was one camera, though, that was notable by its absence: the Sony A7S III. All signs still point towards this body being announced before the end of the year, and it seems to make perfect sense for the company to reveal it at IFA 2019 when the eyes of the tech world are squarely watching.

And of course, with Sony about to go all-on on 8K throughout its line of TVs and electronics, it would be nice to see it crack the 8K barrier with the A7S III…

It's never a dull moment when Huawei is around. All eyes will be on the brand, sitting as it does at the center of the current Sino-American trade war. And we know that it will be revealing more about its Honor TV, a smart television with a pop-up webcam that's powered by Huawei's HarmonyOS.

The manufacturer's bespoke operating system will certainly be a key talking point for the Huawei Mate 30 and Mate 30 Pro. The new camera phones are rumored to be launching without Google support, meaning that HarmonyOS might have to do a lot of heavy lifting.

The phones will feature a circular quad-camera array and an extreme waterfall display – we can't wait to see what kind of sensors it's packing!

We know that the Huawei Mate 30 will launch on 19 September in Munich, but Huawei did confirm that the camera phone will use its new Kirin 990 processor which promises better 5G functionality and lower noise in its photos.

Samsung should have a big showing at IFA 2019, as the company has been behind some enormous imaging innovations recently.

If you've been keeping up with the latest smartphone news, you'll know that it has announced the Samsung Isocell Bright HMX 108-megapixel image sensor. We know that this sensor will make its debut in a 108MP Xiaomi Mi handset, which will have the power of a medium format camera phone.

However, the Samsung Galaxy S11 is also anticipated to feature the new sensor. The South Korean giant usually announces the S line in January but, given the seismic developments in smartphones this year, we wouldn't rule out seeing the S11 make a surprise appearance in Berlin.

We'll be keeping this page updated with the latest news, announcements and hands-ons throughout the course of the show. So make sure to check back over the rest of the week to see everything that happens, as it happens, at IFA 2019!