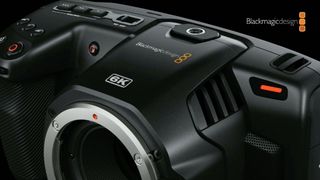 This is big news for professional videographers, from film-makers right down to YouTubers. It’s partly because of the increased resolution, and partly because this opens up a whole world of highly-regarded Canon EF mount lenses to film-makers.

The specs show that the key differences between the existing 4K camera and the new Pocket Cinema Camera 6K are the larger sensor, higher resolution and Canon EF lens mount. The new camera is understandably more expensive,  but still well-placed to compete directly with current full-frame mirrorless cameras.

The new camera features built-in CFast and SD UHS-II card slots, and a USB-C expansion port for recording direct to an external video recorder. The camera also includes a full size HDMI connector for use with an external monitor  with support for HDR and clean 10-bit output. There’s also a mini XLR mic socket  with 48V phantom power for attaching promicrophones, a 3.5mm mic input, headphone connection and a locking DC power connector.

Both cameras will continue in the current lineup, but Blackmagic says the new 6K model now offers a much better upgrade path from the original Blackmagic Pocket Cinema 4K camera.

The similar looking Sharp 8K camera is expected to be available later this year - which will use Micro Four Thirds lenses, previously favored by Blackmagic Design.

We’re told the new Blackmagic camera is just as straightforward to use as the existing model, but Blackmagic points out the increased resolution will offer much more flexibility for cropping and reframing in post production.