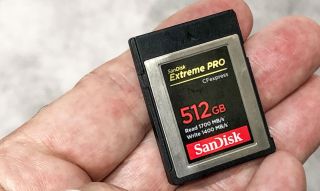 Is a new era in memory card speed about to begin? SanDisk has become the first manufacturer to place CFexpress cards on sale – a new class of memory cards that will promise blisteringly fast data transfer speeds of up to two gigabytes per second. And then following quickly after, Canon has launched a camera that can use these superfast memory cards.

This first generation of SanDisk's Type B CFExpress cards offer read speeds of up to 1700MB/s and 1400MB/s write speeds.

SanDisk is also releasing a bespoke CFexpress card reader, which will sell for $49.99. The reader is designed to support USB 3.1 Gen 2 speeds, and has a USB-C connector.

There are rumors that the Nikon D6, which has been announced as being in development, will use two CFexpress card slots.

The transfer speed will not just for supporting the high-frame rate of professional stills cameras – it will be particularly welcome in future filmmaking cameras that will offer 6K and 8K video resolution.

But other, existing cameras, could be converted to use the new CFexpress cards almost immediately, via a firmware update. The Type B CFexpress cards have the same form factor as the XQD memory cards that are used in a number of existing Nikon, Sony, Panasonic and Phase One cameras or camcorders – and are therefore backward compatible

Nikon has already announced that it has developed firmware updates for its Nikon Z 6 and Z 7 full-frame mirrorless cameras (and its D850, D500 and D5 DSLRs too)  which will allow these cameras to be used with CFexpress memory, instead of XQD cards. Now that the cards are finally on sale, the free firmware updates may now be released.

Sony, Lexar and others

Sandisk is not the only company that will be releasing CFexpress. As we have previously reported,  Sony, Lexar, Delkin and Prograde Digital have all exhibited their versions of the new cards at trade shows over the last year, although the on sale date for these has not yet been announced. The only other company to have announced the actual launch of its CFexpress cards is Angelbird.

Although this first generation of CFexpress looks even more expensive than XQD cards, the hope is that the format will be cheaper in the long run – not least as this standard does not require paying a manufacturing license to Sony (as is the case with XQD cards).