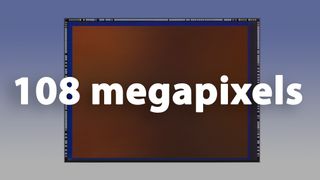 Samsung has officially announced its new 108-megapixel image sensor – the week after it had already been revealed by Xiaomi. Even more curiously, the sensor will debut in a Xiaomi camera phone before it makes its first appearance in a Samsung product – the Samsung Galaxy S11.

Xiaomi broke the news last week at its Images of the Future Conference, announcing that it would introduce a 108MP camera phone powered by a new Samsung sensor.

The Chinese company has taken a deliberate lead in this strange arrangement; its South Korean partner will not apparently implement the sensor into its own products until 2020, starting with the Samsung Galaxy S11.

"Starting from S11, Samsung camera will be a new beginning," tweeted always-on-the-money leakster Ice universe. However, it's not just the new camera that will make the S11 special, as the tipster also posted that we can expect 10x optical zoom as well.

As with other Isocell sensors, the new HMX will benefit from Samsung's Tetracell technology, which enables four sensors to act as a single photosite (for greater sensitivity to illumination) in order to produce 27MP images in low light conditions.

In addition, the HMX supports video recording "without losses in field-of-view" at 6K resolution up to 30 frames per second. Again, this is a technology that only a few high-end digital cameras can offer – such as the just-announced Blackmagic Pocket Cinema Camera 6K.

While we don't know when the Xiaomi 108MP phone will be released, Samsung's announcement stated that, "Mass production for Samsung ISOCELL Bright HMX will begin later this month."

We expect the Samsung Galaxy S11 to be announced in the company's traditional slot for the S line, that being February 2020. Expect plenty more leaks between now and then…