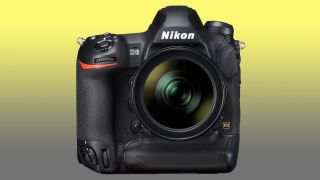 Nikon has officially announced the development of the Nikon D6, its long-rumored replacement for the flagship Nikon D5 model. Mirrorless cameras might dominate the headlines in other areas of photography, but in the pro sports photography market, ruggedness, dependability, speed and the support of a professional lens and accessory system is still the priority.

But while it has confirmed the Nikon D6 is coming, Nikon has not revealed any of its specifications. This means we can expect the rumors to build ahead of the camera's launch (Nikon has not even given a date), and we already have some ideas about what we could expect to see thanks to leaked Nikon D6 specifications.

Even without this announcement, Nikon is already firmly embedded in our list of the best cameras for professionals, and there is already a large professional user base for the Nikon DSLR system that will be waiting with bated breath.

The D6 will definitely be a DSLR, but possibly with some 'mirrorless features', such as in-body stabilization and improved or new silent shooting mode to compete with the Sony A9, for example.

We also hear that the Nikon D6 will have an improved autofocus system. The 153-point AF system in the current Nikon D5 is already pretty legendary, so it's hard to see how Nikon could improve on this – unless it can migrate the on-sensor PDAF (phase detection autofocus system) from its Z-series cameras like the Nikon Z 6 and the Z 7 to the sensor in the Nikon D6.

If that were to happen, it would put the Nikon D6 on a level footing with the Sony A9 and Canon EOS-1D X Mark II for live view autofocus. The Nikon D5 already offers uncropped 4K video, so we might also hope to see developments in that direction too, especially given the great strides Nikon has made with the video capabilities of its Z-series cameras.

We hear that the Nikon D6 is already being field-tested but won't become available until 2020 – which makes sense, because that's the year of the Olympics – but might possibly appear at the CP+ 2020 Imaging Show in Japan in February 2020.

That said, we believe Nikon's arch-rival in the pro DSLR market Canon is also due to replace its top sports model, and that the Canon EOS-1D X Mark III is already being field tested for the 2020 Olympics.

Also 'under development' is this brand new constant aperture telephoto zoom lens. It's not unusual to get lenses with this kind of zoom range, but it is unusual – in fact almost unheard of – to get one with a constant f/2.8 maximum aperture.

Again, Nikon has given no technical details about the AF-S NIKKOR 120-300mm f/2.8E FL ED SR VR, but we do know that it's designed for professional sports photography and we would expect it to arrive in 2020 alongside the Nikon D6.