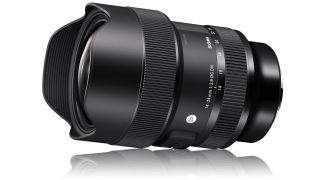 Panasonic has not exactly been pumping out lenses for its new L-mount system, with only three optics on the market right now, so it’s just as well Sigma has stepped up to the plate. One of three founding members of the L-Mount Alliance, Sigma is really starting to bring its optical expertise and production capability to the table.

Panasonic has been pretty bullish about the new L-Mount system, promising 42 L-Mount lenses by the end of 2020, and Sigma’s three new lenses will help that along considerably. Panasonic will be keen to for the Lumix S1 and Lumix S1R to rank amongst the best mirrorless cameras on the market, and that's going to need the support of a bigger lens range.

We've already seen 11 new L-Mount lenses announced by Sigma, but these three lenses described here are new. They will double the number of L-Mount lenses available, and the also look strong candidates to be amongst the best Sony lenses for Sony camera owners.

The Sigma 14-24mm F2.8 DG DN | A is the most interesting. It’s Sigma’s first zoom lens for full frame mirrorless cameras, and while Sigma does already make a 14-24mm lens for Canon and Nikon DSLRs, it says this one has been optimised for Sony E and Panasonic L-Mount cameras, to exploit the short flange length of these new mirrorless camera designs.

The big story, though, is that this is the first ultra-wide zoom to become available for the L-Mount system, arriving ahead of Panasonic’s own planned 16-35mm f/4 lens and beating it for both angle of view and maximum aperture.

Part of Sigma’s high-performance Art lens line-up, the Sigma 14-24mm F2.8 DG DN has some fancy optical enhancements, including one FLD glass element (reckoned by Sigma to be equivalent to fluorite but less expensive) and five SLD (special low dispersion) elements. It also has stepping motor autofocus for fast, quiet, high-speed AF, and is dust and splash resistant, with a water and oil-repellent coating on the front element. Sigma is pitching this lens strongly at the astrophotography community, where wide angles of view, fast maximum apertures and high-level optical corrections are paramount. The front element is too big for a regular filter, but a rear filter holder is included.

It looks like Sigma has pulled out all the stops with the optical design, using 17 elements in 12 groups, numbers usually associated with more complex zoom lenses rather than primes. Again, Sigma cites the optical design advantages of the short flange distance on mirrorless cameras, and uses in-camera corrections to fix distortion and corner shading, but optical corrections for complex aberrations, like sagittal coma flare, which can’t be fixed digitally. Sigma says this lens can resolve “over 50 million pixels”, which is a little above the level of the highest resolution full frame mirrorless cameras on the market right now.

This lens uses a large Hyper Sonic Motor (HSM) to deliver the torque required to move its large focus group, and there is also full time manual focus override with a torque response optimised for fine adjustments. The design is dust and splash resistant, the front element has a water and oil-repellent coating, and as well as a rounded 11-blade diaphragm, the 35mm F1.2 DG DN | A has a de-click function on its aperture ring smooth and silent iris adjustments while filming video.

The third Sigma lens to be announced is much smaller and more affordable. The Sigma 45mm F2.8 DG DN | C is part of Sigma’s ‘Contemporary’ line, which means it’s been designed for overall ‘balance’ in every day use, and its size makes it especially well suited to smaller mirrorless cameras.

Like the other two lenses announced, the Sigma 45mm F2.8 DG DN | C will be available in both E-Mount and L-Mount versions. Despite its modest f/2.8 maximum aperture, it’s still been designed to produce smooth and attractive bokeh wide open with a “classic expression”, but also with high-sharpness rendering at smallere apertures.

This lens uses a stepping motor autofocus system for accurate, high-speed AF, plus full time manual override. It has a dust and splashproof design and a minimum focus distance of 24cm, which is quite short for a lens in this focal range.

• The best Sony lenses to choose right now
• We pick the best Sony cameras
• Which are the best mirrorless cameras on the market today?