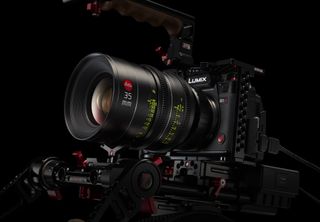 After a long period of development and very little technical information, Panasonic has at last announced the full specifications of its Lumix S1H 6K cinema camera.

This is the third camera in the Lumix S range, and where the Lumix S1R is designed for outright resolution in stills photography and the Lumix S1 is a stills/video all-rounder, the Lumix S1H is a cinema camera first and foremost.

It follows in the footsteps of Panasonic’s Micro Four Thirds GH series, which proved that digital still cameras can produce the video features and quality that professional filmmaking requires.

The Panasonic Lumix S1H takes this to the next level, with a full frame sensor, 6K video capture (yes, 6K) and compatibility with 46 L-mount lenses which are or will be available (according to Panasonic, see the L-mount lens roadmap).

This is where the reputation of the Panasonic Lumix S1H will be made. This is the first camera capable of 6K video capture, and the first full frame interchangeable lens camera to offer 10-bit 60p 4K recording using the Super 35mm image area. It can also capture 4:2:2 10-bit 4K 30p video using the full image area.

If your head is starting to spin already, you’re not alone. The Lumix S1H may be a 6K powerhouse, but its various recording modes, frame rates and aspect ratios take a little unravelling.

If you don’t need 6K, the Lumix S1H will of course capture 4K video or 1080 video at a variety of frame rates. Unfortunately, the permutations of system frequency (60Hz vs 50Hz), frame area (full frame, Super 35mm) aspect ratios (C4K, 16:9, 3:2), frame rates, sampling resolutions and bit-depth are so numerous we don’t have the space to reproduce them here.

It will also offer an anamorphic 4:3 mode and such filmmaking features as tally lights, a waveform monitor and Time Code IN/OUT synchronisation via the camera’s flash sync socket – for synchronising multi-camera shoots.

Most important of all, the Lumix S1H supports unlimited recording time in all modes, thanks to its unique heat dispersion technologies (including a cooling fan).

All this is achieved using a ‘newly-developed’ 24.2MP full frame sensor with Dual Native ISO. This is a Panasonic technology that switches noise control circuitry according to the ISO setting to improve the high ISO image quality. It has ‘native’ ISO settings of 640 and 4,000, and we’ve seen it before in Panasonic’s Lumix GH5S and VariCam models.

The Lumix S1H does have the in-body image stabilization of the other Lumix S models (we wondered if Panasonic would leave it out, as it did with the Lumix GH5S). This offers up to 6 stops of shake compensation on its own, or 6.5 stops in conjunction with Panasonic O.I.S. lenses.

Interestingly, Panasonic has opted to use an OLPF (optical low pass filter) to suppress moiré with this sensor – the current trend is not to use low pass filters in order to enhance detail rendition.

Just as interesting is the fact that Panasonic has opted for dual SD/SDHC/SDXC memory card slots, both UHS-II compatible and supporting V90 memory cards. It doesn’t offer the XQD card slots supported by the S1 and S1R.

The two memory cards can be used for Relay Recording, Backup Recording or Allocation Recording.

Panasonic says the 7.4V 3,050mAh battery will allow 2 hours of recording time in all modes, and supports USB charging.

The Lumix S1H is built to be robust and weatherproof. It has magnesium alloy die-cast top, front and rear frames, with seals around every joint dial and button. It also has a 400,000-shot shutter life.

The 3.2-inch LCD screen on the rear has a resolution of 2,330k dots and Panasonic says it has 150% higher luminance than the rear screens on the other Lumix S models. What’s more, it can be tilted and rotated without having to unplug any HDMI, USB or other cables. It also has a Live View Boost mode for use in near total darkness.

With all the emphasis on video, it’s worth clarifying that the Lumix S1H is also a stills camera. It can capture 24MP 6,000 x 4,000 images in JPEG or 14-bit raw format, and it has a 96MP High Resolution mode for static subjects.

Panasonic’s DFD autofocus system operates at a frequency of 480fps in this camera to provide a claimed autofocus response time of 0.08sec, and has both Eye AF modes and Advanced AI which can recognise both humans and animals like dogs, cats and birds.

The Lumix S1H can shoot at 9fps in burst mode, or 6fps with continuous AF. It also has a 6K Photo mode which captures images at 30fps for 18-megapixel stills, or 4K Photo mode at up to 60fps for 8-megapixel images.