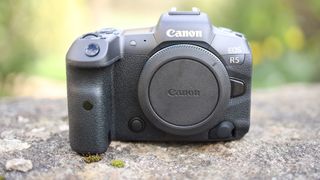 There's no doubt that the Canon EOS R5 is going to be a game-changer. We were blown away by the camera's raw specs when we visited Canon UK for a first-hand look at the full-frame mirrorless camera, which delivers dizzying 8K RAW.

These specs are already enough for this to knock on the door of the best mirrorless cameras, as well as one of the best cameras for filmmaking. Indeed, Canon claims that the R5 is a shooting partner for the new Canon EOS C300 Mark III, meaning that it is gunning for the best cinema cameras as well.

Still, as much as we know about the camera (which is still, technically, only in the development announcement phase), there are plenty of beans that Canon still hasn't spilled – though leaked info and persistent rumors and even a bit of maths helps us fill in the blanks.

So, without further ado, here's everything we know about the Canon EOS R5…

Canon is being incredibly coy about the camera's resolution. While a hi-res EOS R has long been rumored (with reports suggesting a Canon EOS R with a 150MP sensor), the R5 will have a more modest resolution – and the full-readout 8K video basically tells us what this will be. As alluded by CameraLabs, 16:9 8K video on a standard 3:2 sensor would require 7,680 x 5,120 pixels – which would work out as a 39MP sensor. However, if the video is DCi (as the Canon EOS-1D X Mark III offers) then it would require 8,192 pixels – and that means a 44MP sensor. It remains to be seen if this napkin maths is accurate, but it seems likely.

Contrary to online naysayers, who were adamant that the 8K video would be "crippled", the Canon EOS R5 features full-readout 8K video at up to 30fps. Indeed, all its video modes are uncropped, and all its video modes support the company's celebrated Dual Pixel CMOS AF. Canon has just revealed the full scope of the Canon EOS R5's video specs, and they're truly monstrous: 8K RAW internal 30fps, 8K up to 30fps and 4K up to 120fps 4:2:2 in 10-bit Canon Log (H.265) or 4:2:2 10-bit HDR PQ (H.265)… Make no mistake, this camera is coming out swinging.

The biggest mystery, next to the R5's sensor resolution, was the memory card format supported by its dual card slots. Well, it turns out that it supports two formats: SD UHS-II and CFexpress. The Canon EOS-1D X Mark III supports two CFexpress cards, leading many to assume that the R5 would do likewise. However, by still supporting the SD format, the new camera is capable of premium professional performance while not forcing users to upgrade to the pricier new format wholesale.

As was the case with 4K, other manufacturers took the lead when it came to rolling out animal autofocus. However, Canon is returning fire with all guns blazing – the R5 will possess Advanced Animal AF, capable of not only tracking dogs, cats and birds, but also capable of recognizing them by their eyes, face or body shape. That is a huge development, and one that could be a true game-changer for wildlife shooters.

5) A joystick replaces the touchbar

The Canon EOS R featured a love-it-or-hate-it touchbar, and it seems that most people fell into the latter camp. Either way, the R5 ditches the M-Fn (multi-function) bar and replaces it with a multi-function controller (joystick). This may not signify the unpopularity of the bar, so much as it signifies the importance of eight-way control over AF points on an action-oriented camera (the joystick also features on DSLRs like the Canon EOS 90D, Canon EOS 5D Mark IV and Canon EOS-1D X Mark III).

1) Does it feature Deep Learning AF?

Canon told us that the Dual Pixel AF in the R5 has similar capabilities as the system in the 1-series, but it also possesses the ability to perform animal AF as well. What it couldn't confirm, however, was whether any of that autofocus tech is built on the same Deep Learning AF that features in the 1D X Mark III – which does not currently feature animal AF. Since it was hinted that the 1D X could potentially be upgraded to support animal AF via firmware, it's possible that they both feature similar deep learning systems. (If you're asking what is Deep Learning AF, the short answer is "It's brilliant" and the long answer is "Read the article"!)

While Canon made the announcement that the R5 would feature full-readout 8K video and Advanced animal AF, it didn't actually say that the 8K video would support animal AF. It's entirely possible that those two features are entirely separate (with animal AF only being available for stills, or perhaps for 1080p or 4K video) – and when we asked Canon point blank, it couldn't yet spill the beans.

Here's the big one: now that we know just how formidable the camera's 8K specifications are, how long can it actually handle them? Sony's first generation of 4K cameras had a nasty habit of overheating, and some Canon cameras (like the Canon PowerShot G7 X Mark III) will shut off if you record in 4K for too long. With the Panasonic S1H packing a hulking body to handle the heat required for 6K video, can the EOS R5 – which is only a little bit thicker than the Canon EOS R – really handle all that heat? The sting in the tail might be a maximum record time in order to maintain heat dissipation…

4) Does it support HEIF files?

The R5 carries over some of the tech of Canon's flagship DSLR, namely the support for CFexpress, uncropped video and blisteringly fast burst shooting. The question is, will it also be capable of recording HEIF files in addition to JPEGs? This is one of the most fascinating features of the 1D X Mark III, as 10-bit HEIF files are capable of capturing more data in the same filesize (or the same data in a smaller filesize) compared to 8-bit JPEGs. We'd love to see this carry across to the R5 – and, indeed, the rest of Canon's product line.