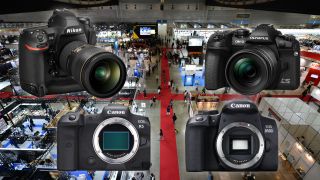 We absolutely live for weeks of camera news like this! After months of rumors, inferences and guttersnipe sleuthing, the truth came to light about a whole host of new and exciting cameras.

Canon blew the industry's socks off with its announcement of an 8K camera that could be the best mirrorless camera we've ever seen. It's not forgetting about DSLRs, though, as it launched a new beginner-friendly model for the masses.

Olympus and Nikon revealed their respective flagship cameras, both of which empower sports, action and general practice professionals to get the best shots possible.

It's not all good news, though, as the coronavirus torpedoed two of the industry's biggest trade shows – one in Spain and one in Japan. So let's get right to it and look at the five biggest camera news stories of the week…

Canon has just announced the Canon EOS R5 – and it's the mirrorless camera we’ve all been waiting for. This guns-blazing professional body will boast 8K video, 20 frames per second continuous shooting, dual card slots and Canon’s first ever in-body image stabilization (IBIS) system. While the manufacturer hasn’t confirmed the Canon EOS R5’s resolution, we believe that it will possess a 45-megapixel sensor – making this a formidable tool for high-end action, stills and video shooting alike.

Ever since the company launched the enthusiast-level Canon EOS R in 2018, the industry has been waiting patiently (read: people on the internet have been screaming and shouting) for a professional-grade version. So the R5 has, in Canon’s own words, been “developed with customer feedback and market needs in mind”.

So, the specifics as far as we know them. In terms of video, Canon says that, “the camera enables creators to shoot wide in 8K and, when needed, crop for a 4K output.” While it hasn’t announced any details of the video capture, our previous story on the leaked R5 specs (which have proven incredibly accurate) lists 8K video at 30fps and 4K up to 120fps…

Nikon has finally announced detailed specifications for its long-awaited new flagship DSLR, the Nikon D6. This is the high-speed professional sports camera which will go head to head with the Canon EOS-1D X Mark III at the 2020 Olympics, and could be crucial to both companies’ fortunes in the professional camera market over the next four years.

Nikon and Canon are both key contenders in the race to provide the best cameras for professionals, and while the Nikon D6 and Canon EOS-1D X Mark III are both a little too specialised and expensive to lead our list of the best DSLRs you can buy right now, they are proof of the faith professional photographers still have in the DSLR design. The DSLR vs mirrorless debate is not over yet!

For hobbyist photographers, the headline specifications of the Nikon D6 might sound positively ordinary. It has a 20.8-megapixel full frame sensor with fewer megapixels than even a basic DSLR or mirrorless camera, yet comes with a price tag ten times higher. But it's built for speed above all else, plus durability, reliability and handling…

Read more:
6 reasons to be hyped for the Nikon D6
Look out Canon, the Nikon D6 is here! The details of Nikon's flagship camera are out

Olympus has announced its latest flagship professional camera, the Olympus OM-D E-M1 Mark III – which boasts a number of remarkable specs, including a world-best 7.5 stops of in-body image stabilization, which makes it possible to shoot handheld astrophotography, as well as 80MP imaging.

However, it ports across some of the new hardware features from the heavyweight 2019 “flagship reimagined” Olympus OM-D E-M1X (a confusing sister product, which features a pro DSLR-sized frame). These include a joystick and dedicated ISO button, along with a more robust shutter mechanism that’s rated to 400,000 actuations (doubling the Mark II’s 200,000).

Canon sticks with the same 24.1MP APS-C sensor as we’ve seen in the Canon EOS 250D / Canon EOS Rebel SL3, and actually has a few megapixels less than the 24.2MP 800D / T7i that it replaces. It also retains the same 45-point autofocus system, all of which are cross-type points for better and faster accuracy…

Two major industry trade shows have been cancelled within a 24-hour period due to the outbreak of the coronavirus. On Valentine's Day came word that CP+ 2020, which was set to take place from 27 February to 01 March in Yokohama, Japan, had been officially cancelled by the show organizers.

The news came 24 hours after the announcement that MWC 2020 – Mobile World Congress, a critical trade event for the mobile industry that welcomes some 100,000 guests each year – had also been cancelled.

Unlike MWC, however, whose cancellation was in large part due to the large contingent of Chinese exhibitors (given the dominant players in the smartphone sector), CP+ 2020 is dealing with a very unique problem. While Japan has relatively few instances of coronavirus, there is currently an infected cruise ship full of 2,500 passengers quarantined in Yokohama harbor – which is exactly where the CP+ venue is situated…

Best ringflash for macro photography in 2020
The 10 best cameras for enthusiasts: cameras for your next steps in photography
Best waterproof jackets for photographers: Keep dry on rainy shoots