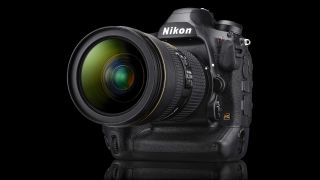 This is the high-speed professional sports camera which will go head to head with the Canon EOS-1D X Mark III at the 2020 Olympics, and could be crucial to both companies’ fortunes in the professional camera market over the next four years.

Nikon and Canon are both key contenders in the race to provide the best cameras for professionals, and while the Nikon D6 and Canon EOS-1D X Mark III are both a little too specialised and expensive to lead our list of the best DSLRs you can buy right now, they are proof of the faith professional photographers still have in the DSLR design. The DSLR vs mirrorless debate is not over yet!

The Nikon D6 is built for power, speed and durability

For hobbyist photographers, the headline specifications of the Nikon D6 might sound positively ordinary. It has a 20.8-megapixel full frame sensor with fewer megapixels than even a basic DSLR or mirrorless camera, yet comes with a price tag ten times higher.

But the Nikon D6, like its rival the Canon EOS-1D X Mark III, is built for environments tougher and more pressurised than regular photographers will ever face. These cameras have to capture ultra-high-speed action, often in the most difficult weather and lighting conditions, with utter reliability, predictability and precision. Nikon has released a whole series of images taken with the D6, which you can see below.

Nikon’s mantra with the D6 is “decisive power, faster workflow, absolute reliability”. It’s designed not just for sports photography but all-round news coverage, where photographers can’t afford to leave anything to chance.

Outwardly, the Nikon D6 resembles it predecessor, the Nikon D5, with a tall body that incorporates a high-capacity battery slung underneath and a dual control layout for both horizontal and vertical shooting.

The autofocus system is brand new. The Nikon D5 had a 153-point AF system with a mixture of regular and more precise cross-type sensors, whereas the D6 swaps this for a 105-point all cross-type array, all of which are individually selectable, and powered by an AF system which Nikon says is faster than ever before. The company says it takes precision to another level, with “unparalleled” tracking performance. The new system offers an increased range of selectable Group-Area AF patterns, another Nikon innovation, to allow detailed optimisation for different subjects and users. You can choose the AF starting point in Auto Area AF mode and prioritise eye AF in this and the 3D tracking modes.

The 20.8-megapixel resolution has been chosen to deliver high image quality at high ISO settings and enable very fast burst modes of up to 14fps with full auto-exposure and AF tracking, and 10.5fps in Silent Photography mode, also with AF tracking.

The Nikon D6 will offer an ISO range of 100–102400 in standard mode, and ISO 50-3,280,000 in expanded mode. This means the camera will be able to capture images in near-darkness, aided by improved autofocus sensitivity, which can now work in light levels as low as -4.5EV.

With the D6 you’re not just paying for high ISO performance and continuous shooting speed. Professional photographers also need high-speed connectivity to get their images back to the picture desk before their rivals, and the D6 incorporates Wi-Fi, Bluetooth and wired 1000BASE-T LAN  support, and Nikon says the D6 brings approximately 15 % faster communication than the previous Nikon D5.

Fast communication and streamlined workflows are crucial for professional sports and news photographers, and Nikon says the D6 has a streamlined workflow that makes it easier to select and prioritise key shots. It also uses the latest and fastest memory card formats, with dual card slots that support both XQD and CFexpress cards.

The D6 also boasts a number of ergonomic improvements over the D5, but we do not yet have a full set of specifications for a more detailed comparison.

It also remains to be seen how the Nikon D6 will stack up against the Canon EOS-1D X Mark III in real world shooting scenarios, and in the year of the 2020 Olympics, this clash of two camera titans could prove just as compelling to photographers as anything that happens on the track!

• These are the best cameras for professionals today
• DSLR vs mirrorless cameras: what are the pros and cons
• We pick the best DSLRs right now