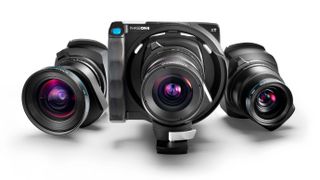 These multi-megapixel monsters are the highest resolution cameras on the open market. Just how far will you go for the ultimate resolving power?

The Sony A7R Mark IV is the highest resolution full frame camera you can buy – but there are cameras with many more megapixels than this. We find out where the A7R Mark IV sits in the megapixel rankings right now, and our list includes some of the best medium format cameras and the best mirrorless cameras you can buy right now.

Megapixels cost money, of course, and the best professional cameras inevitably come with a hefty price tag. We are including only include cameras you can actually buy, not prototypes, one-offs, made-to-order specials or development concepts.

We haven’t picked every single model and permutation from every maker’s range, either. If we did that, the PhaseOne and Hasselblad lists alone would be unmanageable. Instead, we’ve gone for the landmark models in each camera range.

We had a big argument about this, and it's still going on

The argument is based around the capture system. The H6D-400c uses a pixel-shift capture system to achieve 400MP output from its 100MP sensor. Lots of other cameras have pixel-shift systems like this. The ONLY reason the H6D-400c is included is because it's built for 400MP capture and it's not just an incidental operating mode – it is in the camera model name. Multi-shot captures use six different exposures and require a tethered connection to a computer. This makes them suitable only for static subjects and important archiving work for example. So while the H6D-400c might have the biggest megapixel count in this list, it does not have the highest native resolution. If that's what you came here for, you need to straight to number two...

With 151 million pixels, this is the highest 'native' resolution you can get

Crazy money? For an amateur, maybe, but for a high-end commercial or fashion photographer, its a business decision like any other, like leasing premises or buying commercial vehicles. The XF IQ4 needs careful handling and considerable investment. It’s not a walkaround camera you can stuff into a backpack. But this, and high-end medium format cameras like it, can achieve a level of quality, precision and control you wouldn’t believe. The XF 1Q4 system is so exclusive you can't just go on Amazon and buy one – you have to go through Phase One's specialist dealer network.

It's amazing that something this small can cost this much money

The Phase One XT is an extraordinary camera. Phase One doesn't want to call it a 'technical' camera, or a 'field' camera, but that's the closest description. It's an extremely compact modular system that takes the same IQ4 digital backs as the Phase One XF system, above, but is designed for portability and travel. It has its own built-in lens movements for perspective correction, and relies on the LCD display on its digital back for composing images. It also uses its own lens mount and lenses, so the purchase cost of the XT itself is just the start.

With a massive 102 million pixels, the GFX 100 is not so far behind

The GFX 100 narrowly beats the Hasselblad H6D-100c (below) at one third the price. This is how far affordable medium format cameras have come! Having said that, sensor size gets you bragging rights in medium format, just like anywhere else, and the Hasselblad and PhaseOne have ‘full size’ medium format sensors, while the GFX 100 has a smaller sensor mid-way between this and regular 35mm full frame. But look – the GFX100 is a 100-megapixel camera at less than a third of the price of the others. That in itself is amazing, as is the fact this is a camera you can use handheld, with lenses you can afford!

Canon and Nikon have been duking it out for years in the DSLR market, but in the world of medium format it’s Phase One vs Hasselblad. The H6D-100c is the latest in Hasselblad’s long-running modular medium format system, and while Hasselblad can’t match the Phase One for megapixels without resorting to multi-shot models like the H6D-400c (pictured), it does have the cachet and customer loyalty of the Hasselblad brand, and the company has been extremely good at combining its new tech with its much-loved legacy products. Should it really be in third place behind the GFX 100? Only for megapixels – it’s very a different kind of camera.

Sony wants users to see the A7R Mark IV as a medium format rival, and if you judge it on megapixels alone, it’s right in there. It beats base-level 50MP medium format models by some margin and is nipping at the heels of some very big and expensive cameras indeed. However, although Sony’s excellent G Master lenses are fast enough to match the shallow depth of field of bigger but slower medium format lenses, there’s still a magical X-factor that comes from bigger sensors.

The 51MP 645Z is like a supersized Pentax DSLR, but far from new

Never forget Pentax! The 645Z has been around for so long it’s easy to overlook the fact this is the camera that made medium format affordable and is still amongst the best Pentax cameras. These days, its DSLR construction, size, 3fpx maximum burst speed and full HD video make it feel dated and increasingly irrelevant – but its resolution still puts it in the top half of our all-time highest-resolution list, and if you like an old-school approach, its design could appeal to you a lot more than its recent mirrorless rivals.

How can a 50MP camera be in eighth place? That's how far we've come

Megapixels cost money, especially when you move up to a medium format camera. But now you can get that medium format x-factor in a camera that feels about half the size and is certainly less than half the price. The GFX 50R doesn’t have the megapixels, phase detection AF or in-body stabilisation of the GFX 100, but it’s not much more expensive than a premium full-frame camera – and gives you a completely different picture-taking experience and superb RAW files.

Style and image quality combined... at a price

The recently revamped X1D II is a super-stylish snapper with its own range of lenses and its own minimalist finesse. We found the earlier model lovely to look at but a little flaky in its operation, so we look forward to trying the new X1D II 50c properly when we get a full review sample. Its 50-megapixel resolution is starting to look a little ordinary (it barely gets it sixth place in this list!), but Hasselblad’s lenses and image quality are beautiful – not least because of this camera’s 16-bit RAW files. It’s not the fastest camera to use, but it’s got to be one of the prettiest.

For a long time now, this has been the highest-resolution full-frame DSLR you can buy. But apart from bragging rights, it doesn’t seem to have got Canon very far as the overall response to the Canon EOS 5DS appears to have been lukewarm. The fact is, resolution aside, this is a pretty old design, with no Dual Pixel CMOS AF and no 4K video. In fast-changing mirrorless world, the EOS 5DS/R feels a bit of a dinosaur, and even its 50 million pixels can’t change that.

With 47.3MP, it's the highest-resolution full frame Panasonic

Yes, the Lumix S1R has 3 million fewer pixels than the Canon EOS 5DS/R, but it’s a camera designed for the modern digital age of 4K video and content creation, where the Canon belongs to an older, simpler era. We have to put the Lumix S1R below the Canon in our megapixel listing on numbers alone, but in reality the S1R represents the present (and the future), while the EOS 5DS/R is the past.

2018’s influx of full frame mirrorless cameras brought a new round of megapixel wars. The Nikon Z 7 stole a march on the Sony A7R III with around 3 million more pixels, but then along came Panasonic and the Lumix S1R, which sneaked its nose ahead just that little bit further. Even megapixel zealots would probably concede, though, that the Sony A7R III, Nikon Z 7 and Lumix S1R are close enough to be considered the same. It’s just a pity for Nikon and Panasonic that Sony has now brought out the A7R IV!

• What are the best cameras for professionals?
• We think these are the best medium format cameras right now
• The best cinema cameras
• Which is the best mirrorless camera to choose?