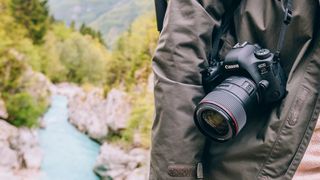 The best cameras for enthusiasts are arguably the most exciting in photography today. This is where some outstanding innovation happens, from DSLRs incorporating the latest mirrorless technology to compact cameras packing in large sensors. There's never been a better time to be a photography enthusiast, and all the major manufacturers have loads of great offerings catering for this market.

More and more great cameras for enthusiasts are coming out all the time, such as new DSLRthat push the limits of what these types of cameras can be. We've put together this guide to help you sort through the best cameras for enthusiasts and find the one that's right for you. We keep this article regularly up to date with all the newest releases once we've given them a good test and know what we think. So you'll already find cameras like the Nikon D780, and if you check back in the future you'll no doubt find the Fujifilm X-T4, which we're putting through its paces right this moment.

The best camera for enthusiast may mean a number of different things, so we've included a broad spectrum of different models, including DSLRs, mirrorless cameras and compact cameras. There are models for those who like to take manual control of settings, and ones better suited to those who like to let the camera's automated modes take the lead.

We've ticked off all the major manufacturers, and have found room for a variety of sensor sizes. The best enthusiast camera represents a balance of performance and price, so we've factored in price tag too when making our picks (that's why some of the models on this list aren't necessarily the newest of their class).

Hopefully our recommendations will include a camera that suits you, and we'll be sure to keep it updated with all the latest releases. And Sony, please hurry up with the long-rumored new Sony A7000, as that sounds terrific!

A significant update over the popular D7200, with great AF and 4K video

Nikon brings its fantastic mirrorless Z series into the enthusiast market with the Z50, an APS-C model to complement the more pro-oriented full-frame Z6 and Z7. Taking full advantage of Nikon's cutting-edge Z-mount, the Z50 is a super-fast mirrorless camera, with 11fps burst-shooting and lightning-quick autofocus. It also is able to produce UHD 4K video, and thanks to Nikon's FTZ adapter, it's possible to use DX-format F-mount lenses with the newer camera, greatly expanding the user's creative options. Nikon has made a few other cutbacks to keep this model under the £1000 mark, most notably the lack of in-body image stabilization, but this is still one of the best cameras for enthusiasts you can get right now.

Like the feel and handling of a traditional SLR and want to step up from APS-C to full-frame photography? Then the second-generation, weather-resistant EOS 6D has got to be near top of your list, particularly with its headline feature being a new 26.2MP full-frame sensor and a sensitivity range that can be expanded to ISO 50-102,400 equivalents. We also get a latest-generation DIGIC 7 processor, but perhaps the most noticeable difference from the previous model on the outside is the 3in vari-angle display, which responds to touch. What's been left out, however, is 4K video, although there is a 4K time-lapse option that stitches together images into a 4K video, plus a microphone input to help you give audio capture a performance boost. AF performance is very good, and the camera handles a variety of lighting scenarios with ease, while battery life at 1,200 shots is likewise commendable. While the EOS 90D is a newer camera, we're still recommending this one for enthusiasts as it's currently one of the cheapest routes into full-frame around.

The G9 is a 20.3MP addition to Panasonic's impressive G-series line of mirrorless cameras, which looks and feels like a miniaturised DSLR, and can be used in conjunction with its maker’s wide range of Lumix G lenses. Being Panasonic, 4K video shooting is right up there on its spec list, though you’ll also want to look at its GH5 and newer GH5S if video is your specialism. An OLED electronic viewfinder delivers a life-like view for those preferring to shoot with the camera to their eye, while the construction shows its semi-pro mettle by being protected against dust, water and freezing temperatures. For studio or landscape photographers wanting that extra bit of resolution, an 80MP composite mode is also available, with images saved in the user's choice of JPEG or Raw formats.

An outstanding release proves there's life in DSLRs yet

The wonderful Nikon D780 was the long-awaited update to the D750, and it did not disappoint on arrival. Blending satisfying DSLR-style handling with exceptional mirrorless-style features like fast burst shooting and snappy Live View autofocus, the D750 is a tool any enthusiast could fall in love with. Its generous shot buffer compliments its fast shooting speeds, while the glorious uncropped 4K video is a treat that makes the camera extra-versatile. There are plenty more nice surprises too, like dual UHS-II SD/SDHC/SDXC memory card slots and an exceedingly generous 2,260-shot battery. We feel spoiled! The release of the Z series had some photographers worrying that Nikon was starting the process of saying goodbye to DSLRs. However, the D780 proves there's no danger of that just yet.

No one could accuse Fujifilm of playing it safe. Into a crowded and competitive mirrorless market, the firm only goes and drops a high-spec enthusiast's camera where you can't see the LCD screen!

Well that's not entirely true: the LCD screen of the X-Pro3 has been designed essentially backwards, facing inwards, in order to prevent the user from "chimping" away and checking every shot after they've taken it. The intent is to put you more in the moment, focusing on what you're shooting rather than what you've just shot. Its design is rangefinder-style, a rectangular shape with an optical direct-vision viewfinder in the corner – though this being Fujifilm, it's an optical/digital hybrid viewfinder that allows you to switch to a digital display if you want. Using the latest X-Trans sensor, the X-Pro3 produces absolutely beautiful images, with vivid colour rendition. Though it's not for the faint-hearted, the X-Pro3 represents a sublime shooting experience for any enthusiast who's up for the challenge. Will it be able to stay on this list once we've finished testing the X-T4? We'll find out soon!

With its backplate entirely taken up by a large touchscreen – as per your smartphone – the TL2 is appealing to mobile phone photographers who aren’t necessarily used to turning buttons and levers to take photographs, but nevertheless want to get a little more serious. Beautifully fashioned from a single block of aluminium, this is admittedly a camera for the wealthy, though it doesn’t quite feature the full range of features we might have hoped for given the asking price. That said, the unit is hand built, and images from its larger than average APS-C sensor are very impressive. We do miss the lack of a built-in EVF, though one is available as an optional extra and the life-like visuals via the 3.7in LCD means it does make up for it somewhat.

A refined and tweaked version of one of our favourite retro-styled mirrorless cameras has always got to be worth investigation. Outwardly, it appears the camera has been on a dose of steroids, with its chunky, raised controls knobs and revised grip, while inwardly we’re now offered 4K video capture at up to 30fps, or otherwise Full HD footage at 60fps. There is also a new Advanced Photo mode that allows further fine-tuning of images, with Live Composite and Multiple Exposure options alongside. The Art Filter effects menu has also grown to number 15 settings, including a new Bleach Bypass effect, while continuous shooting speed has crept up by a fraction of a second, from 8.5fps to 8.6fps. With its compact body, masses of customisation options and a wide range of compatible Micro Four Thirds lenses to use with it, the OM-D E-M10 Mark III is a refreshing proposition for the mobile, image-conscious photographer.

The latest in Sony's speedy A6XXX series: capable, but up against fierce competition

While we're waiting for the aforementioned A7000 (seriously though Sony, come on), the A6600 will do nicely to plug the emotional gap. It's a pretty terrific mirrorless camera and unquestionably the best in the series, though Sony do ask quite a lot for the privilege, with a higher price tag slapped on the camera than many of its competitors. Despite this, the A6600 really is something quite special, with unlimited 4K video, 5-axis image stabilisation and Real-time Eye AF that also works in video. If you're keen to work in video as well as stills this is quite a capable camera, also equipped with Sony's S-Log3 gamma profile and a slot for an external microphone. Access to Sony's impressive stable of E-mount lenses is not a bad bonus as well!

The FZ2500, also known as the FZ2000 in some territories, is an enthusiast-level bridge camera option that acts as a rival to Sony’s RX10 IV, thanks to a well-rounded feature set that includes a 1in-type 20.1MP CMOS sensor. We also get a 35mm equivalent lens reach of 24-480mm, and, this being a Panasonic camera, 4K video capture at either 24fps or 30fps comes as standard too. You can pull 8MP still images from 4K footage and choose a different point of focus after you've capture using the Post Focus function, while the excellent electronic viewfinder is complemented by an LCD that can be swung outwards from the body. Needless to say, if it’s excellent image quality for both stills and video you’re seeking, you won’t be disappointed.

An APS-C sensor and a zoom lens in a compact body – yep, you read that correctly!

Pitched at its DSLR users who want a more pocket-friendly solution as a second camera, Canon’s most recent enthusiast compact at the time of writing manages to squeeze an APS-C sensor into a relatively compact chassis. This is married to a 24-72mm (equiv.) lens with an aperture range of f/2.8 to f/5.6, which is optimised to work with said sensor. In terms of handling, this will feel familiar to any of its manufacturer’s existing users, with a DSLR-like shutter release, a centrally positioned electronic viewfinder and a touchscreen LCD that can be extended and rotated to face a range of positions for added creative flexibility. Factor in resistance to dust and moisture and you can see why current DLSR users may want to add this to their kit bag.