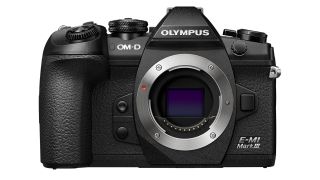 Olympus has announced its latest flagship professional camera, the Olympus OM-D E-M1 Mark III – which boasts a number of remarkable specs, including a world-best 7.5 stops of in-body image stabilization, which makes it possible to shoot handheld astrophotography.

However, it ports across some of the new hardware features from the heavyweight 2019 “flagship reimagined” Olympus OM-D E-M1X (a confusing sister product, which features a pro DSLR-sized frame). These include a joystick and dedicated ISO button, along with a more robust shutter mechanism that’s rated to 400,000 actuations (doubling the Mark II’s 200,000).

The E-M1 Mark III boasts a brand new TruePix IX processor, which means that it can also incorporate some of the E-M1X’ cutting-edge software technology (which required a pair of Truepic XIII processors to execute, illustrating just how powerful the new chip is).

These include features like 50MP handheld and 80MP tripod High Res Shot (both achieved via pixel shift), modes like Live ND Filters (offering up to 5-stop virtual neutral density filters), significantly improved AF tracking and acquisition, custom AF targeting (enabling you create bespoke AF-point groupings, such as vertical lines) and an improved Pro Capture mode (which records 35 images when the shutter is half-pressed, and now up to 120 afterwards).

Still, arguably the most significant feature added to the E-M1 Mark III is the aforementioned stabilization improvement – which provides 7 stops of stabilization as standard, and 7.5 stops when paired with Olympus’ Sync IS professional lenses. This facilitates the new Starry Sky AF mode – one of a number of nods towards astrophotographers, whom Olympus appears to be targeting with its new camera.

Starry Sky features a bespoke algorithm that can perform precision autofocus on even the smallest stars – and in its Speed Priority mode capitalizes on the IBIS for handheld astro shooting with a wide-angle lens. Meanwhile, the Accuracy Priority mode uses a fine-tuned focus scanning for shooting specific stars with telephoto lenses.

Hands on: Olympus OM-D E-M1 Mark III review
The best cameras for professionals in 2020: which pro camera system is best?
Olympus 12-45mm f/4 Pro lens is as light as an apple!