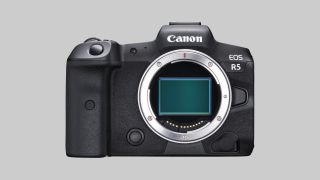 While the manufacturer hasn’t confirmed the Canon EOS R5’s resolution, we believe that it will possess a 45-megapixel sensor – making this a formidable tool for high-end action, stills and video shooting alike.

Ever since the company launched the enthusiast-level Canon EOS R in 2018, the industry has been waiting patiently (read: people on the internet have been screaming and shouting) for a professional-grade version. So the R5 has, in Canon’s own words, been “developed with customer feedback and market needs in mind”.

So, the specifics as far as we know them. In terms of video, Canon says that, “the camera enables creators to shoot wide in 8K and, when needed, crop for a 4K output.” While it hasn’t announced any details of the video capture, our previous story on the leaked R5 specs (which have proven incredibly accurate) lists 8K video at 30fps and 4K up to 120fps.

With regard to the new IBIS, we are promised “a newly Canon-developed, in-camera image stabilization system – which works in combination with the lens stabilization system, making sure that whatever the situation stills and video content captured is shake-free.” Again, referring back to the leaked R5 specs, this is claimed to be 5-axis in-body stabilization with up to 8 stops of when coupled with an appropriate lens.

This would certainly realize Canon’s claim of “unparalleled image stabilization” in its announcement – a record that is currently held by the new Olympus OM-D E-M1 Mark III, with its 7.5 stops of IBIS (when paired with a stabilized lens).

The Canon EOS R5 will officially be capable of continuous shooting speeds of 12fps using the mechanical shutter and 20fps electronically – the latter matching the output of the powerhouse Canon EOS-1D X Mark III, though obviously the R5 will be able to achieve this through the viewfinder (where the 1D X can only do it in Live View on the rear screen).

Like the image sensor, the details of Canon’s chosen memory card format also remains under wraps by the manufacturer. However, we wouldn’t be at all surprised if one or both slots are CFexpress – particularly given the focus on shooting action with this camera.

So far, that’s all we know about the Canon EOS R5 – no pricing or release window has been confirmed. However, its announcement does suggest that the 20MP Canon EOS R6 – which was similarly leaked just recently – is also a genuine product. And the new nomenclature indicates that there are more new models in the pipeline…