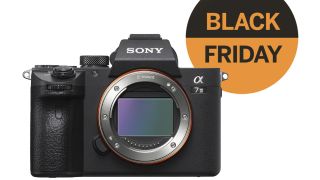 The Black Friday camera deals are now coming thick and fast, but this deal made us start to salivate are reaching for our credit cards. The Sony A7 III is now available for the stunning price of £1,454 (after cashback) which seems to be the lowest it's ever been!

This is one of a number of special deals that Park Cameras is offering on Black Friday itself, and for anyone who is thinking of getting a full-frame mirrorless camera with some of the latest tech on board, this is a deal that is going to be hard to beat. Park has doubled the cashback that was already available on this model to make this price possible, and has put the cherry on  what already looks a mighty appetizing cash by offering to throw in a 128GB UHS-II SDXC memory card into the deal.

Sony A7 III body: £1,454 after £300 cashback
This is the best UK deal we've seen so far on the Sony A7 III in this Park Cameras deal that sees this accomplished 24-megapixel full-frame mirrorless camera come with £300 cashback. You pay £1,754, but get £300 direct from Sony's own cashback scheme. As a special bonus, Park are throwing in a free 128GB UHS-II memory card worth £79 into the mix. Nice!View Deal

The Sony A7 III is one of the best full-frame mirrorless cameras around, with a 24.2MP CMOS sensor and a BIONZ X processing engine. The Sony A7 III's continuous shooting speed of 10fps is fantastic for sports and wildlife photography, while the 5-axis image stabilization system can compensate for up to 5 stops of camera shake.

Sony A7 vs A7 II vs A7 III: How do they compare?
Sony camera Black Friday and Cyber Monday deals in 2019
Best E-mount & A-mount Sony lenses