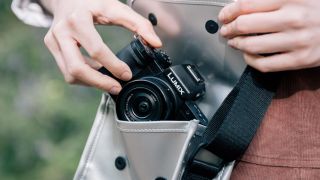 The best Panasonic cameras fall into three categories. The company is perhaps best known for its compact mirrorless Lumix G cameras, which use the Micro Four Thirds mount and offer advanced 4K video features as well as regular stills photography. This range has just been boosted by the exciting new Lumix G100, which is pitched squarely at novice vloggers with some clever features and a very competitive price.

Panasonic has also branched out into professional full frame mirrorless cameras with its Lumix S1 and Lumix S1R models, and its high-end Lumix S1H cinema camera.

Panasonic cameras are amongst the best mirrorless cameras you can buy right now, but Panasonic also makes some of the best compact cameras too, including long-zoom travel cameras, bridge cameras and high-end compact cameras for enthusiasts.

Panasonic’s G-series cameras use Micro Four Thirds sensors slightly smaller than the APS-C sensors in rival mirrorless cameras, but they make up for this with smaller and more compact cameras and lenses, and with Panasonic’s speciality – 4K video features. Many of Panasonic’s cameras are designed to be equally good at video as stills photography and some, like the Lumix GH5S, are out and out video specialists. The G-series cameras use Micro Four Thirds lenses, which will also work on the best Olympus cameras too (and vice versa).

The latest Panasonic camera, the Lumix G100, is so new we haven't had a chance to test it yet, but it's a pretty radical new design that's unlike existing Lumix G mirrorless cameras, with a high-tech 'subject-tracking' (our words) audio system, a video selfie mode and some high-end features we're used to seeing only on more expensive models.

Panasonic has also moved into the professional market with its full frame mirrorless Lumix S series. These are bigger and heavier cameras designed for experts and come with a whole new range of L-mount lenses. Obviously these are more specialised, but we couldn’t do a guide to Panasonic cameras without including them!

So we’ll kick off our guide by picking the best Lumix G mirrorless cameras right now, then cover off the full frame Lumix S models before checking out some of the best Panasonic compact cameras. you can use the navigation buttons to go straight to the section that interests you most.

The best Panasonic camera in 2020

Panasonic’s Lumix G cameras come in two broad types. The ‘G’ models have DSLR-style bodies with a viewfinder on the top and the ‘GX’ models have a smaller rectangular shape like old-fashioned ‘rangefinder’ cameras, and come with and without viewfinders, depending on price. The brand new G100 adds a third type – a micro-DSLR style camera with powerful vlogging features, a viewfinder and a vari-angle screen.

The best Lumix G all round for features, versatility and price... for now

The Panasonic Lumix G90 (G95 in the US) is a great stills and video camera for enthusiasts and vloggers. The handling and control layout are great, and the autofocus feels very snappy indeed. The only issue is the price. It's a good camera for stills photographers, video and vlogging, and Panasonic's underrated 4K Photo modes offer capabilities other cameras don't have. The Lumix G90/G95 isn't cheap, however, though it does have Panasonic's V-Log mode as standard rather than a paid for extra. It also has some strong competition from other Lumix models, so keep reading to see other Panasonic Lumix alternatives. The Lumix G9 is (below) is especially good for experts and videographers, while the new G100 could prove to offer almost everything the G90/G95 does but in a smaller, cheaper and more user-friendly camera. We can't wait to try one!

Incredible value for money, with or without its smart little 12-32mm kit zoom lens, the  Panasonic Lumix GX80  /  G85 shoehorns a host of high-tech features into its diminutive, compact-style build. These include 5-axis image stabilization, Light Speed AF, Post Focus and 4K ultra-high definition for both video and rapid-fire stills, as featured in Panasonic’s top-end cameras. There’s also a high-res electronic viewfinder built into the back of the camera, along with a tilting touchscreen. If you want a camera that goes large on features and performance, but with a small build and price tag, this is an ideal choice. It's a great camera for travel, and its price makes it great for beginners, too.

• The best Micro Four Thirds lenses for your Panasonic camera

The Lumix G9 just keeps on getting better... and cheaper!

With a relatively high megapixel count for a Micro Four Thirds camera, the Panasonic Lumix G9 combines a 20.3MP image sensor with super-fast autofocus and a rapid 12fps continuous drive rate. This rises to 30fps for 6K stills, and as much as 60fps for 4K stills. The ultra-high-resolution electronic viewfinder helps you to track the action in the finest detail, and there’s a fully articulated touchscreen around the back. You can expect to retain the finest detail in your images as well, thanks to an excellent 6.5-stop stabilization system. It’s Panasonic’s most stills-focused camera, but still offers excellent video capture facilities. In fact, while it might be a little intimidating for novices, we rate this as the best Lumix G for experts. Recent price drops have made it exceptional value, especially in the UK, and the v2.0 firmware update in November 2019 has brought improved autofocus and 10-bit internal video capture. This is a terrific camera for the money, and the only downside is its size.

Exceptional for both stills and video capture, the Panasonic Lumix GH5 is a brilliant all-rounder. It positively screams ‘high-res’, from its ultra-high-resolution electronic viewfinder and fully articulated touchscreen to its 20.3MP image sensor and 4K 60p video recording – along with super-fast 6K 30fps and 4K 60fps stills modes. The DSLR-style design brings great handling characteristics and easy access to advanced shooting settings. You also get 5-axis sensor-shift stabilization and Light Speed AF. The only drawback is that the high megapixel count in a Micro Four Thirds format sensor results in a relatively limited ISO range. But still – combining stills and class-leading 4K video features, the GH5 is quite a camera and continues to maintain a strong reputation amongst serious filmmakers and vloggers.

A compact but powerful camera designed for enthusiasts

If you want a smaller and more portable camera than Panasonic's DSLR style models, but you don’t want to compromise on features and technology, the GX9 is the answer! Its slender body features a high-res electronic viewfinder built into the back, rather than having a chunkier DSLR-style design. Good for shooting from any angle, the viewfinder and rear screen both have a tilt facility. And while small in build, the GX9 goes large on the inside, with a newly developed 20.3MP sensor that gives you the same resolution as the G90/G95 and Lumix G9, but in a much smaller camera. Other attractions include 5-axis sensor-shift stabilization and 4K capture for both video and rapid-fire photos. The GX9 is ideal for travel and for use with Panasonic's smaller lenses.

Announced in 2018 and on sale from the spring of 2019, the new full frame mirrorless Lumix S models are designed for experts and professionals. Currently there are three models to choose from, but which one is the best buy? We've left out the Lumix S1H because that's a specialized cinema that's a little too high-end for this guide, but that still leaves two to choose from…

If you need top-quality stills photography, the Lumix S1R is worth the extra over the Lumix S1. It costs substantially more, but it has almost twice the resolution. Both are pretty big, hefty cameras, though, and the same goes for the L-mount lenses we’ve seen so far from Panasonic and Sigma (also part of the new L-mount alliance, along with Leica). If you need to travel light and shoot stills and video equally, the smaller format Lumix GH5 or Lumix G9 models (above) might be a better choice. A firmware update in November 2019 has made this camera's XQD memory card slot compatible with the latest CFexpress memory cards, so Panasonic is ahead of the curve here.

The Lumix S1R’s cheaper stablemate is better for video

For photographers mostly interested in 4K video (and also low-light photography), the Lumix S1 does have some advantages over the S1R beyond its lower price. Because of its lower resolution, the sensor has larger and more receptive photosites and the native sensitivity range goes one stop higher to ISO 51,200. It also has a larger buffer capacity for continuous shooting, so it's the better option for low light and sports photography. It’s video that shows up the biggest differences, though. The Lumix S1 can capture uncropped full frame width ‘oversampled’ 4K video, and a firmware update in the summer of 2019 brought Panasonic’s V-Log L mode for extended dynamic range in video post-production. A further firmware update in November 2019 means the Lumix S1, like the S1R, can now use the latest CFexpress memory cards.

Are you looking for a small but versatile travel camera for the whole family to use, a powerful supertelephoto bridge camera or an advanced compact camera for when you need to leave your main camera at home? Panasonic has all three...

A brilliant but affordable travel camera with a generous zoom

Sensibly priced but rich in features, the Panasonic Lumix TZ90 compact camera has a smaller sensor but a 30x zoom lens with a more generous range than the 10x or 15x zooms in the pricier Lumix TZ100 and TZ200 models. The effective 24-720mm focal length range of the Leica lens takes you all the way from generously wide-angle coverage to extreme super-telephoto, while fully retracting into the camera for pocketable stowage. And despite its super-slimline dimensions, there’s an electronic viewfinder as well as a tilting touchscreen around the back that can go through a full 180 degrees for those essential travel selfies!

More sensibly priced than Panasonic’s range-topping FZ2000 bridge camera, this one is also a better option than the cheaper FZ330 because it has a physically larger image sensor with a higher megapixel count of 20.1MP instead of just 12.1MP. It doesn’t stretch so far into super-telephoto territory, but still delivers an effective zoom range of 25-400mm from its Leica lens. Light Speed AF helps to track fast-moving action, and 5-axis hybrid optical image stabilization helps to keep things steady. 4K video capture is available and the maximum continuous speed for stills is 12fps or 50fps, when using the mechanical or electronic shutter respectively.

There are currently two ‘LX’ cameras in Panasonic’s premium range of compact cameras. Both are very attractive propositions; the LX100 Mark II combines a Micro Four Thirds format image sensor with a Leica zoom lens. For value, however, we prefer the Panasonic Lumix LX15. This camera has a smaller 1.0-type image sensor and a Leica Summilux zoom lens with an ‘effective’ 24-72mm focal length range, in full-frame terms. The camera is wonderfully compact yet packs some seriously powerful features, including Light Speed AF, hybrid stabilization, and 4K definition for both video and bursts of stills at 30fps.