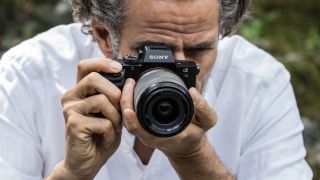 Scroll down for today's best Sony A7 II deals

Want a portable full-frame camera with semi-pro mettle? Then set your eyes on this second-generation, interchangeable-lens offering from Sony. With the third-generation Sony A7 III now on sale - there are some great deals to be found on the Sony A7 II.

Also known as the ILCE-7M2 or Alpha 7 Mark II, the Sony A7 II offers a maximum 24.3MP pixel count, using the same sensor as the original A7. But the big advantage that the A7 II has over the A7 (which is also still available in stories) is the optical five-axis image stabilisation, which provides 4.5 extra stops of shutter speed. The camera accepting the same E-mount Sony lenses as other A7-series models.

Standout specs include a sensitivity range that runs between ISO 50-25,600, together with a usefully tilting 3in LCD, built-in Wi-Fi and NFC connectivity, and a maximum continuous shooting speed of 5fps.

Autofocus and start-up times are also up to 40% faster than those on the A7, the former thanks to a 117-point phase-detect AF system that works in combination with 25-point contrast-detect AF, ensuring sharpness no matter where the subject lies in the frame.

Eye-level composition is achieved via a crystal-clear 2.36million-dot, 0.5-inch EVF, one that's so good that it’s easy to forget you aren’t using an optical finder. In addition to this, there’s a helpful sensor just above the EVF window, which detects when the camera is held to the eye and switches power from the main screen to the finder accordingly.

Handling-wise, the A7 II resembles a downsized DSLR, with a forward-placed shutter release button and front control wheel. It also has a deeper, more comfortable handgrip than its forebear.

The A7 II’s controls are sensibly arranged and the menu systems logically structured. Just below the shutter release, at the top of the grip, you’ll find a small protruding dial that’s used for exposure adjustments. There are also customisable buttons, but, oddly, the rear LCD here isn’t a touch-sensitive panel.

That said, it’s all about the quality of the Mark II’s images, and in this respect it doesn’t disappoint. The camera produces detailed images in a range of conditions, and it’s capable of delivering plenty of punch. Image noise is kept well under control until ISO 6400, although at ISO 12,800 and 25,600, noise reduction applied to JPEGs starts to take its toll.

Under regular daylight conditions, the A7 II’s autofocus system is competent, and it also does a very good job in lower light, albeit with a little hesitancy and the odd adjustment back and forth.

Overall, the A7 Mark II is an eminently capable option for the enthusiast or even pro photographer, and it’s a perfect vector for jumping aboard Sony’s system.

Take a close look at the Sony A7 II, a premium full-frame camera

The cheapest full frame camera in 2019