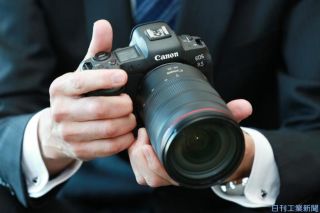 The first picture of the Canon EOS R5 spotted in the wild has been revealed online, along with a report that the 8K-capable camera will launch in time for the Olympic Games in Tokyo – which would mean a release by July.

The Canon EOS R5, whose specs caused a sensation in the industry when it was announced last week, will be a professional-grade camera with dual card slots, in-body image stabilization and blazing shooting speeds of up to 20 frames per second. All of which, on paper, makes it well suited to action photography.

"Canon has decided to launch the full-size mirrorless camera 'EOS @ R5', which is currently under development, compatible with 8K video shooting before the Tokyo Olympics and Paralympics," writes Japanese outlet Newswitch (via machine translation).

However, despite the impressive specs, it seems that the R5 is not intended to be the ultimate pro sports camera – an honor currently reserved for the powerhouse Canon EOS-1D X Mark III in Canon's lineup, which was released this month to impressive sales.

"Sales are performing better than expected [for the 1D X Mark III]. It seems that the demand for sub-machines can be acquired by the introduction of R5, and the usage rate can be increased… It is intended mainly for high amateurs, but can withstand professional use."

Either way, it may still be cutting it fine to get the Canon EOS R5 into the hands of photographers in time for the Olympics – so you can expect the sidelines to be dominated by the best professional cameras like the 1D X Mark III, Sony A9 II and the upcoming Nikon D6.

And you don't have to wait until then to see the camera up close and personal – the Canon EOS R5 will be showcased at The Photography Show in Birmingham, United Kingdom, from 14-17 March!