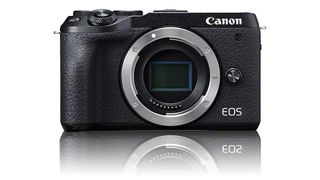 Well Canon’s definitely aimed at the top end of that range with the EOS M6 Mark II. It has the same 32.5MP APS-C sensor as the EOS 90D, the DIGIC 8 processor and the same uncropped 4K video capability. Will this become one of the best cameras for vlogging?

Who is the Canon EOS M6 Mark II for?

Canon says the EOS M6 Mark II is for ‘everyday life’, for capturing spontaneous moments either as still images or as video.

This puts it somewhere between a ‘street’ camera and a vlogging tool, and it’s got perfect credentials for both, thanks to its tilting touchscreen display, detachable electronic viewfinder and 4K video capabilities.

Can you have too many megapixels? Probably not yet – though Canon’s new sensor does push the boundaries of photosite size and pixel pitch further than ever before in an APS-C camera.

With over 8 million more pixels than any previous Canon APS-C DSLR, the EOS M6 Mark II matches the full frame EOS R for resolution (if not sensor size) and makes the 26MP EOS RP look just a little underpowered. The 32.5 megapixels give you a little more leeway when cropping photos and, probably just as important, keeps camera nuts worried about future-proofing their purchases right at the head of the game.

This is undoubtedly going to be one of the key selling points of the EOS M6 Mark II. Users of other brands might take uncropped video for granted, but on previous Canon consumer cameras the field of view in 4K video mode has been substantially narrower than for regular stills photography. If you wanted to grab a ‘wide’ shot, you’d actually need an ultra-wideangle lens to do it.

With uncropped 4K video, however, the angle of view of your lenses stays the same when you switch between the stills and 4K video modes.

It’s interesting to compare the EOS M6 Mark II with the EOS 90D for video capabilities. Normally, you’d expect the mirrorless camera to be better at video; in fact, which both cameras have microphone sockets, the EOS 90D DSLR adds a headphone socket too for monitoring sound levels during recording.

And while the EOS M6 does offer a tilting rear touchscreen, the EOS 90D goes further with a fully articulating rear screen.

The EOS M6 Mark II has a very impressive 14fps continuous shooting frame rate, but a fairly modest buffer capacity of 80 large JPEGs. It does have a 30fps ‘Raw Burst’ mode we’ve seen on the PowerShot G5 X Mark II and G7 X Mark III, but this operates in a limited ‘auto’ mode so we haven’t yet had a chance to see how this works.

In both cases, the EOS M6 Mark II offers continuous autofocus tracking and eye tracking, using the latest incarnation of Canon’s Dual Pixel CMOS AF system. This covers 88% of the frame width and 100% of the height.

The AF system is also more sensitivity than this camera’s predecessor, focusing in light levels right down to EV-5 (with an f/1.4 lens or faster).

With a viewfinder… or without?

Perhaps controversially, Canon has not included a built-in electronic viewfinder. That wouldn’t be surprising on a low-cost mirrorless camera, but this is right at the top of the range.

What the EOS M6 Mark II does have, though, is an accessory slot n the top where you can attach an EVF-DC2 electronic viewfinder. The position means that it’s separated from the camera but on the lens’s optical axis, and it does mean the EOS M6 Mark II can be adapted for video or stills photography. If you want the EVF, look out for dealer bundles which save money by including it as a kit.

• These are the best mirrorless cameras right now
• Which is the best Canon camera to get?
• We pick the best cameras for vlogging