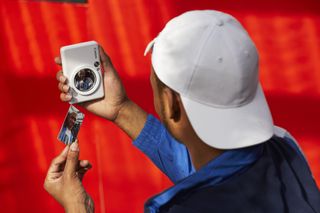 Canon has launched its own range of instant print cameras, to rival the best instant cameras offered by Fujifilm, Polaroid, Kodak and others. Rumored for a while, the cameras use the same Zink print technology that Canon licenses in its pocket printers.

The Ivy Cliq+ combines a digital camera with an instant print camera - minicking the dual functionality found in recent models from Fujifilm and Kodak.

The Ivy Cliq+ features an 8 megapixel sensor and features an optical viewfinder along with a large selfie mirror. The camera prints 2x2in or 2x3in stickers – the Zink refill packs can each produce 10 borderless prints.

The camera can autofocus down to a distance of 30cm, but has a fixed 25.4mm f/2.2 lens. There are eight LED lights around the lens that are designed to produce even portrait lighting in lowlight, or for fill-in outdoors.

The party trick of the Ivy Cliq+ is that it can connect to the free Canon Mini Print App using Bluetooth. This allows you to control the printing process from your smartphone – choosing which images you want to print, and adding borders and creative filters. The Cliq+ also features NFC to aid printing images direct from your phone.

The App also can be used a remote control for the camera - helping with group portraits. The app also allows you to customise the sounds made by the camera.

Weighing 188g, the Cliq+ stores digital versions of your image on a microSD card. Its lithium-polymer batteries are charged via a USB port - and each charge is said to be enough to create 25 prints. The camera measures 121 x 80.3 x 21.5mm.

The Ivy Cliq+ will be available in pearl white, sapphire blue, and ruby red colors. It will sell for $159.99

The Zoemini S will be available in matt black, pearl white or rose gold – and will retail for £149.