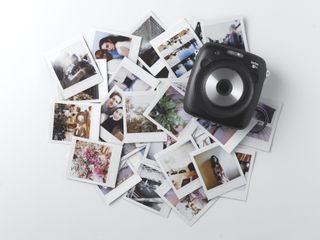 Confused about which film type is compatible with your instant camera? If so, you're not alone. After all, not all Fujifilm instax film fits all instax cameras, but instax film will fit some other brands of camera – including those from Lomography.

Are all instant films the same?

No, they vary in terms of size of prints and the technology and chemistry used to produce their images, but there is some common ground.

For example, the most widely used instant film at the time of writing is certainly Fujifilm’s instax brand, of which there are wide, mini and square instax print pack varieties. Which type of film you need will depend on which instax camera you’ve bought.

Helpfully Lomography instant cameras – the Lomo’instant range – also use instax film packs. The latest Kodak and Polaroid cameras will use their own media, Zero Ink (‘Zink’) and Polaroid I-type or 60 film respectively.

On average, taking a shot and producing a print costs around £1 ($1) each time, though Polaroid film can work out more expensive at just under £2 ($2) per print, which is something else to bear in mind when choosing an instant camera.

What size is an instant print?

Again, this depends on the camera in use and what the photographer is trying to achieve.

For example, beginner-friendly cameras from Fujifilm and Lomography typically produce credit-card sized prints from instax Mini film packs. These are great for selfies and fun portraiture.

Both Fujifilm and Lomo also offer ‘Wide’ cameras in their range that use instax Wide film packs. As it sounds, these produce wider prints that are more akin in size to standard photographic prints, of a similar aspect ratio to a playing card. These are great for landscape images and group portraits.

Exceptions to the above are the Kodak Printomatic camera, which delivers Zero Ink (‘Zink’) prints slightly smaller than a credit card, and then the Polaroid OneStep 2, which delivers beermat or coaster-sized images familiar to those who used Polaroid cameras in 70s and 80s.

What ISO is instant film?

In terms of light sensitivity, an ISO rating is not always given on the packs. If we drill into the specification of, say, Fujifilm’s instax film packs, we find the wide instant film and mini instax film both offer a daylight balanced ISO of 800. Coupled with the often automatic use of camera flash, we can soon see why instant images can look a little bleached out on occasion.

Polaroid offers a little more choice when it comes to film. Its i-Type and ‘600’ packs are rated at ISO 640, and its colour and black-and-white film for SX-70 cameras are at ISO 160.

More expensive instant cameras give you the ability to adjust exposure in camera and lighten or darken the image if the prints you’re getting are too bright or bleached looking.

Does it develop instantly?

Again, this obviously depends on the camera and the media in use. Zero Ink prints from the likes of the Kodak Printomatic camera are ready the second they are emitted from the camera – and are scratch-resistant and weatherproof to boot.

Fujifilm instax prints can take up to 90 seconds to fully develop. By contrast, Polaroid prints can take anywhere between a whopping 10 and 15 minutes to look their best. Shaking the prints to speed up the process, however, is a bit of an old wives’ tale.

Are instant prints always in colour?

The standard is certainly a colour print. However some cameras – such as the Kodak Printomatic – provide the in-camera option to shoot in black and white as well as colour, which means the resultant print is also monochrome. From time to time, specialist film packs for instant cameras are often made available, such as monochrome options or those with a pink tint.

Both Fujifilm and Polaroid currently offer monochrome and black-and-white branded options respectively. In terms of overall appearance, whereas the Kodak Zink shots boast edge-to-edge printing (ie with no border), pictures taken on instax and Polaroid film all come with a wide border around them, typically thicker at one edge. This gives you a place to put your fingers and handle the print, without getting a greasy thumbprint on the still-developing portion of the picture.

Do instant films have a best before date?

Yes, the likes of Fujifilm instax media packs – and those which are Leica branded but use Instax media nonetheless – have a best before date, typically two or three years hence.

Polaroid packs, by contrast, give the date on which the media itself was produced. Since there are typically between 8 and 10 prints in the film packs bought for instant cameras, such media typically gets used up by its owners pretty quickly – especially if there are kids around. In other words, you’re unlikely to have packs sat on the shelf or in a cupboard for ages.

How do you get a good deal on instant/instax film?

Obviously buying in bulk, looking out for bundle deals when buying the camera in the first place, or picking up multipacks of say 20 sheets rather than 10 shots per time (as is possible with Fujifilm instax) will save you a few pennies.

With instant cameras we are paying a bit extra for that instant thrill. That’s perhaps why the cameras themselves seem inexpensive compared with their digital equivalents, because the film is where the manufacturers make their profit.