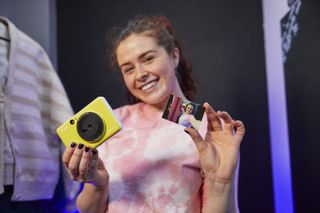 The Canon Ivy Cliq is the baby in the new Canon instant film camera range. Known as the Canon Zoemini C in Europe and the Ivy Cliq in North America, this is a stripped down version of the Ivy Cliq+/Zoemini S but still offers both a digital camera and a Zink instant print camera in the same device.

The Canon Ivy Cliq has a 5 megapixel digital camera with a built-in optical viewfinder, and a microSD card for recording your images. The fixed lens focuses automatically with the closest AF distance being 50cm. The ISO range of the digital camera is limited to ISO 100 - 1600.

The built-in printer uses the same Zinc paper technology used in Canon pocket printers, and this creates borderless prints of up to 2 x 3 inches.

Unlike the Ivy Cliq+/Zoemini S the Cliq does not offer Bluetooth or NFC connectivity – so you can't use this to print off images from your smartphone.

The Cliq has a built-in flash - but does not feature the eight LED lights of the Ivy Cliq+/Zoemini S.

The camera weighs 170g and measures Approximately 121 x 78.3 x 23.7 mm. It is powered by a rechargeable battery that can produce around 25 prints per charge.

Canon Zoemini C is available in four colors: pink, yellow, mint green and blue, and will cost £99 when it goes on sale in April

The Canon Ivy Cliq will be available in colors that include Bumblebee Yellow, Seaside Blue and Lady Bug Red and will retail for $99 from April.