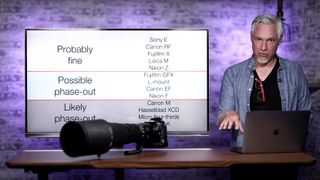 We all know that it's been a rough couple of years for the camera industry, and the current COVID-19 pandemic clearly hasn't helped matters. However, according to one noted photography pundit, things are so bad that no fewer than four different camera systems will be dead within three to five years.

Photographer and YouTuber Tony Northrup posted a new video predicting that the Canon EOS M, Hasselblad XCD, Micro Four Thirds, Pentax K camera systems will be phased out due to the commercial realities of the industry as it stands.

He also identifies four other systems as being at risk of being phased out: Fujifilm GFX, L-Mount (which comprises Panasonic's entire full-frame line, the Sigma FP and a number of new Leica bodies), and Canon EF and Nikon F DSLRs.

So, is Northrup right? Are the former camera systems really going to die by 2025, are those companies going to close, and should you abandon ship right now? Well, clearly nobody can predict the future – including Northrup, who last declared incorrectly that "Micro Four Thirds is DEAD!" in 2018 –  but here's our take on how things look for the camera systems on this dead pool…

Tony is hardly alone in wondering where Canon's APS-C mirrorless system sits, given its apparently limited lens lineup and the system's overall insularity. In particular, when the RF mount was revealed and it was completely incompatible with the M system, many wondered if Canon was set to abandon its smaller system.

However, despite the notion that there aren't many lenses for it, the EOS M mount is surprisingly mature – there were 31 Canon EOS M lenses when the EOS M6 Mark II was launched last summer, and there have been more released since then including such brilliant optics as the Laowa 65mm f/2.8 2x Ultra Macro APO, plus three models from Sigma including the Sigma 56mm f/1.4 DC DN | C.

Canon told us last year that "the M series is here to stay," and while cameras such as the Canon EOS M50 might seem like oddities in the United States, it should be remembered that it has consistently been one of the best-selling cameras in Asia. This is where Northrup's claims are a little Western-centric, if not parochial, as the popularity of the EOS M line in that part of the world might be enough to keep the line alive on their own – regardless of their continued adoption in the US.

With brilliant bodies like the Canon EOS M6 Mark II (which in many ways is superior to its DSLR counterpart, the Canon EOS 90D), and bountiful rumors about more M-system cameras this year, if the EOS M system is in its death throes then Canon doesn't seem to have had the memo!

One of Northrup's observations is that, while companies rarely tell consumers that a system is being phased out (the Samsung NX being the oft-cited example), a telltale sign that a camera line is on the wane is that the latest models are often little more than software revisions, with little or nothing in the way of internal or external hardware upgrades.

Hasselblad's mirrorless medium format system certainly falls into this category, with the Hasselblad X1D II 50C's main improvement over its predecessor being that it boots up and processes images faster. Indeed, the new camera was such a rush job that its video features didn't even work. And, with its most notable feature being its low (for medium format) price tag of $5,750 / £5,400, many saw it as Hasselblad trying to claw back sales by competing on price.

With the Fujifilm GFX line now dominating the mirrorless medium format space, with more affordable optics that are just as capable, it's difficult to see where the XCD system realistically fits in a shrinking sales space. And while Hasselblad had been positioning the line as a Leica-like prestige brand, the new lower pricing strategy seems to preclude it from achieving that perception as well (although this change may be linked to Hasselblad now being owned by DJI).

As noted, Northrup has previously soothsaid that Micro Four Thirds is dead – indeed, experts and naysayers have been saying that for years. So what truth is there to the idea that the smallest interchangeable lens system on the market is going to be dead in five years?

Clearly there were rumors last year that Olympus was selling its camera business, though these have been debunked for now. And the fact that Panasonic jumped into bed with Leica and Sigma to produce full-frame cameras was a pretty clear indication that its focus was no longer on Micro Four Thirds technology.

Northrup cites that the smaller sensors of Olympus and Panasonic cameras make them more susceptible to sales erosion from the best camera phones, though the fact is that phones are eating into sales of every camera system regardless of what sensor is inside. And again, the argument rather overlooks the fact that Olympus cameras – particularly the PEN line, like the Olympus PEN E-PL10 – are consistently among the best-selling cameras across Asia.

An often overlooked factor is that Micro Four Thirds is an open platform, meaning that anyone can develop for it without having to license the technology (which is what has limited third-party support for the Fujifilm X system). This, combined with the smaller system being cheaper to develop for and manufacture, means that it has an incredible amount of support from producers of lenses as well as cameras.

So, while Northrup notes that Olympus alone can't keep the shop afloat, that overlooks the Sharp 8K Video Camera, the Blackmagic Pocket Cinema Camera 4K, the newly announced Z CAM E2-M4 4K cine camera and others who are taking Micro Four Thirds into the filmmaking realm – where it is a formidable system for guerrilla, independent and entry level cinematographers.

In short, there seems to be plenty of life left in the Micro Four Thirds system.

We've always had a soft spot for the legendary brand, but being optimistic about the future of the Pentax K system is increasingly challenging. Third-party lens support is crucial for the vitality of most mounts, so it's a big red flag when a major optics manufacturer announces that it is abandoning a camera system – as Sigma did, when it revealed that it ending Pentax K lens production.

It doesn't feel like the lens support is any greater from the company itself, with its latest HD Pentax-D FA★85mm F1.4ED SDM AW providing little comfort for Pentax K users thirsty for a new optic for their system.

It doesn't help confidence that Ricoh Imaging – current licensor of the Pentax brand – steadfastly refuses to move with the times and embrace mirrorless technology, insisting that mirrorless users will "come back to the DSLR". Echoing this archaic sentiment, the upcoming Pentax flagship DSLR feels like a camera out of time – and its only standout feature seems to be a larger optical viewfinder.

We definitely don't want to see the K system go away but, unless Ricoh does some serious course correction, Northrup may be sadly on the money.