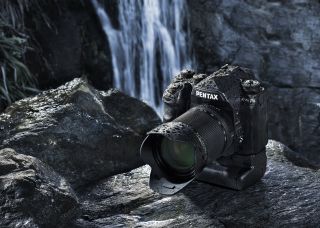 A one-time challenger to the ‘big two’ of Canon, Nikon, Pentax’s public profile seems much reduced these days, as does the breadth of its camera range. It hasn’t for example got any mirrorless cameras on offer any more. This is a real shame, as its products have a reputation for great value as well as delivering a good performance.

Since 2011 the Pentax brand has actually been owned by Ricoh, and, although Ricoh itself continues to put out  compact cameras and 360 cameras under the Ricoh name, it has retained the Pentax branding for its select band of DSLRs, as well as Pentax’s one and only high-end medium format camera: the equally well-respected 645Z.

Buy any digital SLR and you’re actually buying into a camera system, which includes a large range of Pentax lenses. Fortunately the Pentax brand has a long and distinguished history so there are plenty of new and older Pentax K-mount lenses and accessories to buy, if you’re an adopter of Pentax. So that’s something special about the K.

It’s also worth noting, for anyone needing a jump in megapixels and a hike in image quality – perhaps for commercial photography – then Pentax’s 645Z is one of the more approachable and more affordable medium format cameras you can buy. In short, user friendliness, value for money and well-saturated images with bags of detail should be what you’re sizing up a camera from this manufacturer for.

With the above in mind let’s take a look at the best Pentax cameras currently on the market and available to buy.

Rugged of build to a semi pro standard plus smart of design, the K-70 is probably the best all-round Pentax cameras enthusiast photographers can buy, by virtue of its weather resistant exterior being a rarity at its price. Also handy is an in-body image stabilization (IBIS) system with an equivalent performance of 4.5EV stops, and, for traditionalists, the fact that its optical viewfinder features a near 100% field of view. With an 11 point AF system offered, the Pentax uses a hybrid combination of phase detection AF and contrast detection AF when shooting using live view.

We’re used to mirrorless cameras offering a modest battery life, so the 480 shots delivered here seems fair, though it’s a little disappointing for a DSLR. Still, combine this with a variable angle LCD and pictorial output that requires very little in the way of adjustment, if any, and the K-70 reveals itself as one of the more reliable and consistent DSLRs you can buy.

Like the K-70, the KP offers a relatively modest battery performance of 390 shots, but unfortunately doesn’t offer its sibling’s hybrid AF functionality. Still, it does however boast an interesting range of photographic options, including depth of field bracketing and motion bracketing, along with a generous trio of control dials for those of us who enjoy getting hands on.

Like other Pentax cameras you can buy, the KP consistently delivers some good-looking images with great contrast and good exposure, making it ultimately a good alternative to the usual suspects.

Another classic DSLR option for those looking for the best Pentax digital camera to buy that packs in a lot of features while handling in a familiar manner for photo enthusiasts.

Again, with this being a Pentax, we get built in shake reduction, but the real selling point here is the full frame sensor with its 36.4 million pixel resolution. Also impressing is a ‘scissor action’ articulating rear screen and extended exposure modes, along with two SD card slots. It’s not all great news; the camera offers only a modest 4.4 fps maximum burst speed when shooting in full frame, which, while adequate, won’t impress sports or action photographers.

There’s also no hybrid phase detection AF system for its live view mode and ‘only’ Full HD video capability rather than 4K, but we are blessed by the same accurate and well-performing 33-point AF system as its predecessor. Ultimately though, excellent image quality at an affordable price is what you’ll be buying this flagship Pentax DSLR for.

If it’s a high resolution Pentax camera you need above all else, you’ll be pleased to learn that this medium format option handles a bit like a bigger version of Pentax’s K-3 DSLR – which means it’s not overly daunting for those making the step up.

The 645Z, which replaced the earlier 645D, is solid in feel and weather-proof in build, so it doesn’t mind a spot of rain, while it is also one of the more affordable MF cameras available. It's flexible too, allowing for up to 10 Raw files or 30 high quality JPEGs to be shot at its maximum capture speed of 3fps. While that’s not match for a high end DSLR, most people won’t be buying a medium format camera with speed as a priority, but rather resolution.

Creative flexibility extends to being provided with a tilting 3.3-inch screen here, which is both capable of live view capture and aiding and abetting the recording of Full HD movies, for which a stereo microphone port is provided.

There are also, usefully, two SD card slots for dealing with all that data. If it’s a more approachable and slightly more affordable medium format camera you’re after, the well-received 645Z ticks many boxes.