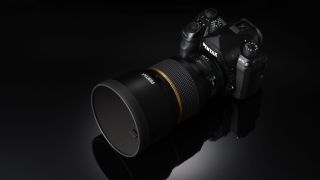 We first reported on this new Pentax portrait lens back in March 2020, and when we heard about the latest Pentax lens roadmap in May, the Pentax 85mm lens was still not expected until the end of the year. But here it is, along with confirmation of the key specifications.

Pentax may not be the major player in the photographic market that it once was, but it still has a strong fan base, and this new premium-quality portrait lens will fill an important gap in the pro lens line-up for the full frame Pentax K-1 Mark II.

Perhaps the most interesting feature of this lens is the rather remarkable concave front element. We can’t remember ever seeing this before on a camera lens.

This is the second fixed focal length prime lens in Pentax’s new ‘star’ series. The company has said that this and other ‘star’ lenses have to meet the highest in-house standards both for current and future Pentax DSLRs.

In a little snip at other makers, perhaps, Pentax claims the new 85mm lens delivers ‘superb imaging power’, and ‘without relying heavily on the image sensor or image processor’. (It’s not uncommon now for camera and lens makers to combine optical and digital corrections in lenses, particularly more exotic or demanding designs.)

The HD Pentax-D FA★85mm F1.4ED includes three Super ED (Extra-low Dispersion) elements and an aspherical optical element to suppress aberrations and axial chromatic aberration in particular. Another aim was to reduce distortion to nearly zero at a focus distance of 4 metres – a feature aimed at portrait photographers.

Inside, the lens has a nine-bladed round-shaped diaphragm for smooth bokeh and electromagnetic rather than mechanical diaphragm control for maximum accuracy and consistency. The exterior design is dustproof and weatherproof with eight separate seals to keep out water.