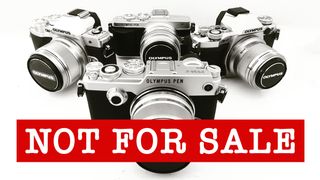 UPDATE 24 JUN 2020: Olympus has sold its camera business to a private equity fund in Japan.

UPDATE: Following the Bloomberg story, and Olympus' open-ended comment made to us, Photofocus was able to secure a full statement from the manufacturer that in no uncertain denies that the Imaging Division is for sale:

“For Imaging, however, we currently have no plans to sell the business. The task is therefore to stabilize and strengthen its market position. To achieve that, we are actively running marketing activities, and have already established a clear and exciting product roadmap for the coming months and years. We are actively pursuing future technology developments that will enhance photography and video for creators. Furthermore, Imaging is and will continue to be an important technology and innovation driver for our other businesses."

The Olympus statement can be read in full over at Photofocus.

ORIGINAL STORY 21 NOV 2019: Rumors began swirling earlier this year that Olympus Corporation was considering the sale of its imaging business. While this was denied by the manufacturer's CEO in March, fresh sale rumors circulated following Olympus' latest financial report – and the flames have been fanned by a recent Bloomberg story where he seemed to backtrack on that denial.

The sale talks began in early spring, following the board appointment of D Robert Hale – a partner in Californian firm ValueAct Capital, Olympus' largest shareholder with 5.4%, which was apparently pressing for the Imaging division to be sold following less than peak fiscal performance. A second member of ValueAct Capital has since been appointed to the board.

At the time Takeo Takeuchi, Olympus CEO, denied the sale talks, impressing that the Imaging division in particular served as a valuable R&D feed for the company's market-leading medical products. Following Olympus' latest financial report on 06 November, which posted a 17% revenue decline for Imaging, he again reiterated the commitment to the camera business.

However, in a report on Bloomberg this week, the CEO seemed to retract his assurances that the Imaging division would not be put up for sale.

"Takeuchi also backtracked on some of his comments in the past that the camera business was not for sale, saying that may not be the case anymore," wrote the outlet. "The imaging unit, which makes up 6% of sales, is the lowest margin and lowest growth businesses in Olympus’s portfolio, according to past company presentations. Olympus is working to stabilize the imaging business by focusing on its main markets, a spokeswoman said."

Takeuchi noted that the company intends to restructure its business portfolio to focus on its core medical business, which sees it control over 70% of the global endoscope market – though it faces increasing challenges from rivals like Fujifilm Holdings Corp in this field.

The apparent walking back of his commitment not to sell the camera business has caused rumors to run rampant online that Olympus is looking to offload its Imaging division. So we reached out to Olympus UK for an official comment, and received the following:

"On November 6, we have unveiled our renewed corporate strategy for the upcoming business years. While there is a clear focus on the Medical business to drive future growth of the Olympus Corporation as a global medtech leader, the Imaging and Scientific Solutions divisions remain crucial components to the overall Olympus business and are clearly stated as such."

Again, there is no firm denial that a sale of the camera business isn't being considered. And with the American investment firm occupying more seats at Olympus' top table, pressure is certainly mounting to turn around the Imaging division's fortunes.

Is a sale likely to happen? Not if Olympus' Japanese execs have anything to say about it. The manufacturer had a challenging year, with no new products being released while it relocated its manufacturing facilities from China to Vietnam. Now that the move is finished, and with the introduction of new products like the Olympus OM-D E-M5 Mark III, hopefully the figures in the next report will be healthy enough to keep the investors happy.

Olympus NOT selling its camera business
Sony no longer owns a share of Olympus
The best Olympus cameras in 2019: for Instagramers, enthusiasts and pros