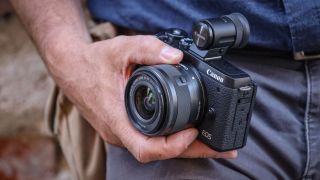 The just announced Canon EOS M6 Mark II is the company's best EOS M mirrorless camera yet. With its 14fps burst rate, uncropped 4K video and optional EVF, it's impressed us both with its specifications and with its handling in our hands on review. In fact, we think the EOS M6 Mark II may be better than the Canon EOS R, and cheaper too.

But where are the lenses? Canon's been busy pushing the EOS M series as 'storytelling' cameras, and many of its EOS M lenses are aimed at the entry level end of the market, so there's this perception that it's not a 'serious' camera. Indeed, Canon only lists eight native EOS M lenses.

Lens support is an important factor in the success of any camera range. It's also  a major factor for us when we update our list of the best mirrorless cameras to buy. Canon's RF lens roadmap is filling up nicely, but its plans for the EF-M lens range seem to be in the doldrums.

But hang on. Some of these lenses are actually quite interesting, such as the Canon EF-M 32MM F/1.4 STM fast 'standard' lens, and the pocket-sized Canon EF-M 11-22mm f/4-5.6 IS STM ultra-wide zoom.

And Canon is not the only company making EF-M mount lenses. Samyang is the biggest independent producer (it makes more EF-M fit lenses than Canon!), but Tamron, Laowa and even Lensbaby are in on it too.

So here's a list of the 31 native EF-M lenses we've counted that you can get right now. Who says the EOS M has no lens support!