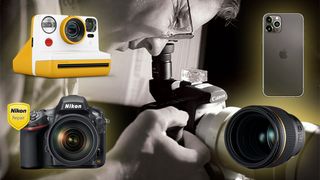 With the world preoccupied by loftier concerns, camera news has been a little bit quieter than usual – and, unsurprisingly, it's been once again dominated by those other concerns.

Canon and Nikon have both been forced to close service centers, meaning that anyone waiting for equipment to be serviced or repaired will face delays to having their gear processed and returns.

The new iPhone is also facing delays, as Apple wrestles with supply chain issues and concerns that there may be reduced market appetite for a new product, given the current climate.

So, any good news? Yes! Polaroid released its latest camera – a new Polaroid for a new decade, and it's a pretty dang good one. And we also have a new lens from Pentax, of all people, which announced a new wide-aperture Star-series lens.

Without further ado, then, here are the five biggest camera news stories of the week!

Canon USA has closed four of its service centers due to COVID-19 safety measures. The Canon Service Facilities in California, Hawaii, Illinois and New Jersey have been shut down until further notice.

The move comes as the manufacturer complies with the Stay at Home directives issued by authorities in each state, in addition to the Shelter in Place orders being observed locally.

Canon's decision follows Nikon USA announcing a blanket suspension of repairs at all its service facilities. The Big N is no longer accepting any kit for repair, and is asking customers to contact remote support representatives online…

It appears that the iPhone 12 could be delayed, due to the ongoing coronavirus outbreak, as Apple is reportedly considering postponing its traditional September launch for the new phone.

The upcoming iPhone 12 is widely expected to be the first 5G phone from Apple, which is taking its now customary conservative approach to implementing the new technology (it now trails behind everyone from Samsung to Huawei, who already have the best 5G phones out on the shelves).

However, it appears that 5G is one of the main contributing factors to the proposed delay, as it is important for the company's 5G debut to be a success. Though of course, the current situation caused by the COVID-19 pandemic – everything from its effect on manufacturing supply chain to consumer willingness to buy a new iPhone – is the primary factor…

Polaroid Now is an instant classic

This week marks the launch of the new Polaroid Now camera – which itself marks the long-awaited unification of the Polaroid Originals and Polaroid brands.

Intended to be a Polaroid camera for now, the Polaroid Now has been redesigned with a new look and feel befitting the new decade – and it has some new tricks, too, namely a newly developed autofocus lens system “that automatically switches between distance and portrait formats – for a more precise shot each time.”

The camera also boasts longer lasting battery life and, importantly, a brighter flash – and the superior illumination provides noticeably better image quality, making the Now a top contender for the best instant camera title. Ergonomically the camera takes one step (sorry) away from the angular, hard-cornered features of previous bodies like the Polaroid OneStep2, featuring softer and more rounded edges that make it more comfortable to shoot with…

Its 85mm focal length is equivalent to 130mm in 35mm terms, when mounted on Pentax APS-C DSLRs, which combined with the wide f/1.4 aperture makes this a candidate for the best portrait lenses on the market.

Following proudly in the footsteps of the previous new generation D FA prime, the HD Pentax-D FA* 50mm f/1.4 SDM AW, the new optic will almost certainly become one of the best Pentax lenses when it arrives later this year.