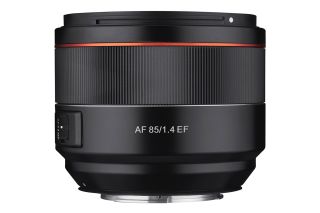 The arrival comes just a week after the company unveiled the AF 24mm f/2.4 FE, a wide-angle prime lens for users of Sony's full-frame Alpha models.

The new lens, which goes by the name Rokinon AF 85mm F1.4 EF in the US, boasts an upgraded dual LSM motor that promises fast, quite and accurate autofocus, with the lens's minimum focusing distance being 90cm. The optic also features a nine-element, seven-group design, with Hybrid aspherical glass and and Ultra Multi Coatings to help keep image quality high. The lens will have a 77mm filter thread.

One of the main selling points of the lens is its weight and compactness; without its caps or hood, it measures just 72mm in length and weighs 485g. Despite its light weight, Samyang goes on to claim that the lens has a construction that sufficiently protects it against inclement weather.

Incidentally, Samyang already offers a far cheaper 85mm f/1.4 lens for Canon users, although that lens's low price is explained at least in part by the absence of an autofocus motor. Other autofocus rivals, such as Sigma's 85mm f/1.4 DG HSM Art lens and Canon EF 85 mm f/1.4L IS USM are have considerably higher price tags, so no doubt the new optic will appeal to portrait shooters on a budget.