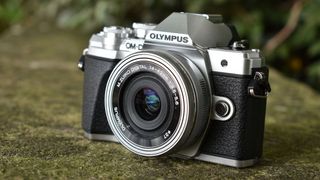 (Bear in mind eGlobal is based in Hong Kong, not the US or UK, so don't expect a US/UK guarantee.)

So who's the Olympus OM-D E-M10 Mark III best suited to? Well, anyone looking to get into mirrorless photography, for a start – it's a great entry-level camera. Its small size makes it a brilliant, travel-friendly second camera, too, and there are some impressive features packed into that compact body, including built-in 5-axis image stabilization, a 2.36million dot OLED viewfinder and tilting LCD, 4K video and rapid bursts of stills at up to 8.6fps.

Amazon’s best price right now is $599/£493, while Very and John Lewis are still selling the Olympus OM-D E-M10 Mark III for over £600. eglobal does report limited stock, however, so if this Christmas camera deal is of interest, you’ll need to take a look sooner rather than later.

Olympus OM-D E-M10 Mark III: save over 50%
US: $385.99 (RRP $799) | UK: £299.99 (RRP £629)
eglobal has slashed the cost of the excellent Olympus OM-D E-M10 Mark III mirrorless camera by a massive 52%. With flagship processing power, 4K video and compatibility with loads of lenses, this is an impressive camera that’s particularly well-suited for beginners, travel photographers, and anyone looking for a brilliant Christmas camera deal.View Deal

With a similar handsome form to its forebears, but a better processing engine, 4K video and a superior autofocus system on the inside, the retro-chic Olympus OM-D E-M10 Mark III received the maximum five out of five stars when we reviewed it.

Our only criticism is that the 16.1MP sensor isn’t quite the latest generation, but this isn't a significant issue for most people – and the flip side is that the Micro Four Thirds format means it’s unusually compact, making it great for travel. This is one of our favourite mirrorless cameras, and the Christmas deal makes it cheaper than we’ve ever seen it.