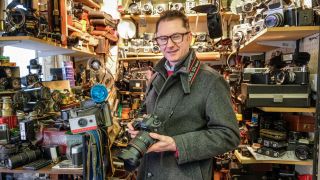 Growing up, there were always cameras in the house. My father was a wildlife artist and painted from color slides of birds that he’d travel the length and breadth of the country to photograph. As a boy, I would often accompany him on these trips and remember being more interested in what he was using to take his pictures, rather than what he was actually taking pictures of.

He stored his camera equipment in a home-made camera case improvised from an old suitcase and home-made inserts upcycled from sofa cushion foam (not quite as elegant as Rod Lawton’s camera storage solution, but still impressive).

I was never allowed to hold – let alone touch – any of his kit, which comprised SLR bodies and a choice of long lenses for capturing his beloved birds and big cats.

I’d like to think I’m easier on my own children, but am still having counseling following my seven-year-old fumbling with and almost dropping my DSLR a couple of weeks ago.

Moving over to digital in the late Noughties, with Sony having bought Minolta’s camera business, I was able to use my Tamron 28-200mm on a Sony Alpha 350. But a few years afterwards, when I was all set to go mirrorless and splurge on a Sony A7 setup, the camera shop proprietor did me a better deal on a Canon EOS 5D Mark III and a bundle of extras.

Surely one of my best-ever camera purchases, and still doing a great job after six years. A sweet-spot full-frame resolution of 22.3MP, a fantastic autofocus system straight from the EOS-1D X, excellent performance in low light, great in the hand and well built. A wise buy even now, the Mark III holds its own when compared to its successor – a camera that I don’t recall people getting quite so excited about.

They say the best camera is the one you have with you, and you never have to miss a shot with this in your pocket. This is definitely the Cupertino crew’s best camera phone offering yet: three lenses on demand, a buffet of image effects and a range of exposure trickery that lets you take daylight photos in the dark. And the video footage is broadcast quality, too. Apple may be one year behind its rivals when bringing the latest tech to market, but who cares about that when iPhones work so well and you don’t have to use Android?

Low weight and well balanced, this is my dependable backup camera. Also known as thee Rebel T6i, the EOS 750D offers me the added benefits of a fold-out tiltable rear screen, plus contemporary features like Wi-Fi operation via the Canon Connect app. And for those times when I don’t appreciate the payload of an L-series lens, I can use this body with an EF-S 17-85mm f/4-5.6.

Some would say it’s expensive and heavy and I wouldn’t disagree, but this is a great performer that has never let me down. It offers a Swiss Army Knife-esque toolset of useful focal lengths, with excellent reproduction into the bargain.

I don’t actually own one – yet – but I have borrowed this lens and its performance gives Canon’s EF 70-200mm f/2.8L a run for its higher price tag. The Sigma may be bigger and heavier, but its build quality is bombproof and it’s way more affordable than the Canon. (The 82mm filter thread size is the same as my two Canon EF zooms, so if I do decide to snap up a Sigma 70-200mm f/2.8 anytime soon, I won’t have to buy yet another UV filter.)

Used with a pair of Speedlite 430EX III-RTs, this is a great flash controller, and radio triggers are so liberating when compared to the restrictions of line-of-sight. The ST-E3-RT’s menu system is straightforward enough, but I find it’s easier to dial in the required settings from the flash menu on the camera.

I’ve used Manfrotto tripods for two decades and their products always do the job well. The 190go! is a four-section set of sticks with leg twist locks rather than levers (some of which have broken on me in the past), and a fold-out centre column that’s useful for flat-lay still life photography. I prefer the MH804-3W 3-way head to a ball head – it just feels more stable when you’ve got a weighty lens on the camera.

I have enough camera bags to stock a shop with, but this one seems to have been made to measure for my setup. The storage compartment swallows an EOS 5D Mark III, my 16-35mm and 24-70mmm zooms and two flashguns, and its rear-opening compartment means that nothing is accessible when the pack is on your back. The top storage section takes everything else, from a remote shutter release, a pair of filters, flash trigger, various cables and leads, batteries and even an additional lens.
• Best camera backpacks

For those occasions when a backpack containing your full setup isn’t required, the Hadley Pro always steps up. It’s amazing what you can fit inside it: a camera, lens, flash, tablet and 13in laptop being the baseline load – and more accessories can be made to disappear in the front pockets. Billingham bags always look good, and the build quality is superb.

Sorry to disappoint anyone here, but I can count the number of underwhelming camera equipment purchases in the low single digits. I always do a lot of research before buying anything and I’ve seldom been sold a dud in a camera shop on the very rare occasions I’ve bought anything on impulse.

Something I did find hard to get good results from, though, was a…

Used to shoot on-the-fly video instead of having the hassle of unpacking a DSLR. It was difficult to operate, even with the GoPro smartphone app, and you always had to be super-mindful of the lens distortion. In the end I just gave up and used my iPhone with a clip-on lens…