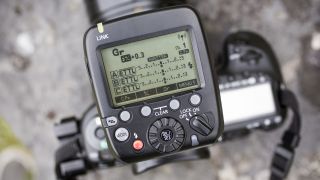 Experiment with speedlights and you’ll soon find it necessary to liberate your flashgun from your camera’s hotshoe to get more advanced effects, and better lighting. The best flash trigger was traditionally a good old cord, but with inevitable range limitations.

Using a wireless flash trigger is a much better bet. Not only does a decent radio-frequency trigger offer up to 100 metres of range, you can often use a single transmitter to control multiple flashguns separated into several groups. It’s great for replicating a studio flash head setup, with separate key, fill and accent lights. The only downside is you’ll need an additional receiver for every extra flashgun you want to incorporate, though some modern flashguns can pack inbuilt receivers.

Another thing to bear in mind is, unlike a simple cord which enables all flashgun functions, many low and mid-range wireless triggers can’t transmit TTL metering or other specialist signals. Consequently, you may have to resort to manual flash control, which can be time-consuming.

Finally, wireless flash triggers are usually designed to work with one camera brand, but we’ve included an exception. The clever Cactus system is cross-compatible, which is great if you’ve got a varied camera kit.

Five things to watch out for

1. Stand back
All the kits we’ve featured use radio frequency triggering, which unlike cheaper infra-red systems, usually provides up to 100m of range without needing a direct line of sight.

3. TTL triggering
A triggering system that wirelessly transmits TTL metering signals is a must if you rely on the fire and forget simplicity of a TTL flashgun, but these triggers inevitably carry a premium.

Typically, a flash trigger will enable a shutter speed up to 1/250sec, but top-end systems boast high-speed sync with compatible flashguns, enabling up to 1/8000sec shutter speeds.

The ultimate wireless flash trigger, though it may be overkill for a single flashgun

$170.95
View at Adorama
No price information
Check Amazon
See all prices (2 found)
Wireless TTL triggering
All the extra features you could want
Superb quality
Can be complicated for beginners
High cost of transmitter and receiver(s)

The Odin II system is available for Canon or Nikon systems, and you can buy Sony and Pentax variants of the Odin II transmitter.

This trigger isn't cheap, but the premium price reflects the extensive feature set. Where most triggers have three group options, Phottix gives you five, as well as 32 frequency channels and Digital ID matching to maintain a secure, uninterrupted connection between camera and flashgun(s). Naturally, there’s wireless TTL for effortless flash metering, and even flash zoom control so you can alter the flash coverage to suit the lens focal length you're using.

It’s small wonder then that performance is outstanding. Sustained burst shooting posed no problems in our testing, and neither did long-range triggering. We were able to shoot at our test camera’s 1/200sec maximum sync speed with no banding, though there is a High Speed Sync mode that’ll top out at 1/8000sec.

With so much to play with, the Odin II isn’t the most accessible system for newcomers, but its streamlined control layout and clear backlit screen are a pleasure to use. Build quality is also top notch, and both transmitter and receiver are powered by convenient AA batteries.

Got a mix of flashguns for different camera brands? This is the trigger to buy

The original Cactus V6 made waves in the world of wireless flash triggers thanks to its ability to simultaneously trigger flashguns from all major manufacturers, including Canon, Nikon, Nissin and Sigma. The cross-compatible hot-shoe design also meant the V6 wasn't picky about which brand of camera you mounted it to, and it could be triggered via a standard PC Sync socket.

The V6 II is also more intelligent than the V6, as it's able to auto-detect the brand of flashgun or camera to which it's attached, and program itself accordingly. Range is excellent at 100+ metres, there's the ability to manage four flash groups over sixteen possible channels, and everything’s controlled by a clear, back-lit LCD screen and intuitive controls. The V6’s build quality is also reassuring, with metal hot shoe mounts top and bottom.

You’ll need two V6 transceivers to get started - one set as transmitter, the other as receiver - which does double the price, but the combined cost is still competitive with other transmitter/receiver kits.

A well made, high-performing trigger kit that's great for all abilities

Nissin’s Air System uses a 2.4GHz radio frequency link, which in the Air 10s capable of a huge 100m wireless range - a healthy increase on the 30m range of Nissin's older Air 1 transmitter. While few scenarios demand you to be such a distance away from your flash, it at least gives peace of mind that this system will maintain a rock-solid connection at shorter distances.

The Air 10s Commander unit is totally intuitive to operate, with a clear, logical display and just the right amount of controls to balance ease of use with functionality. It packs useful features like remote power adjustment of a whopping eight flash groups, an AF assist lamp, not to mention wireless TTL compatibility with Canon, Nikon, Sony, Fuji and Micro Four Thirds TTL systems.

You can control Nissin’s own Di700A, i60A and MG-series flashguns directly from the Air 10s without an Air R receiver attached. The receiver itself is just as compact as the Commander, and is also powered by AAA batteries. It too has eight selectable channels, and Nissin has added a little flip-down foot that lets you stand the receiver and attached flashgun on a flat surface - a nice touch.

The original Viper system was a simple but very effective trigger with an impressive 2.4GHz, 100-metre range. However it was Canon-only, and lacked TTL transmission, but now Hahnel has now addressed both these limitations. The Viper TTL kit comes in Canon, Nikon and Sony variants, with TTL compatibility for all three brands. We found the TTL mode on our Nikon sample version worked perfectly.

You still get remote control of flashgun power from the transmitter, with the clear backlit LCD screen and logical controls making it a cinch to use. Flashguns can be arranged into three groups, and though there’s no choice of frequency channels, Hahnel goes one better with a Digital Channel Matching system that securely codes the transmitter and receivers together to prevent interference.

Build quality isn’t quite on a par with the top triggers on this list, but it’s not far off and you get metal hot-shoe mounts all round.

$41
View at Amazon
See all prices (2 found)
Highly customisable, distinctive look
Really fun to use
Sharp at point of focus
Needs a Composer Pro - not cheap
Not as versatile as some lenses here

Shoestring budget contenders like this can often disappoint, but first impressions of the RF-603 II are encouraging. The fit and finish are more than acceptable for the money, and while the receiver’s cold shoe mount is plastic, the two hot shoes are metal.

Although there are no group options, sixteen frequency channels are available to avoid interference, though they’re set using microscopic switches under the transmitter. A full-on 2.4GHz radio frequency link provides a genuine 100-metre range, and when testing at closer distances, Yongnuo claims sync speeds of up to 1/250-second. We could only manage a reliable 1/160sec sync in our testing, but the connection was stable enough to avoid misfires during burst shooting.

The final trick up the RF-603 II’s sleeve is it can be used as a wireless shutter release: just connect the receiver to your camera’s remote socket, then the two-stage button on the transmitter focuses before firing the shutter.

An incredibly powerful setup, but it's really aimed at pros

$132.74
View at Amazon
$186
View at Adorama
$186
View at Focus Camera
See all prices (8 found)
Flawless performance
Full compatibility with advanced flashgun features
Underwhelming build for the money
Complicated to get used to
Expensive

PocketWizard is a pro favourite in this sector, and it’s easy to see why with this no-compromise combo. The FlexTT5 transceiver can double as a transmitter or receiver, but we paired it with with the MiniTT1 transmitter, as it’s significantly smaller. Both the FlexTT5 and MiniTT1 come in Canon or Nikon mounts (there's also a Panasonic version of the FlexTT5), and both support Canon E-TTL and Nikon i-TTL metering, transmitted over a huge 240-metre range. Or, if that’s not far enough, this can be increased to a staggering 365 metres when using Basic Trigger mode. This mode allows the MiniTT1 or FlexTT5 to work as a transmitter on any camera with a standard hot shoe.

The FlexTT5 enables high speed sync with compatible flashguns, allowing for super-fast shutter speeds up to 1/8000 of a second. You can tweak this and adjust the plethora of other advanced features including extensive channel options by connecting the on-board USB port and using PocketWizard’s Utility software, which also enables firmware updates.

The best flash diffusers, softboxes and modifiers for your speedlight