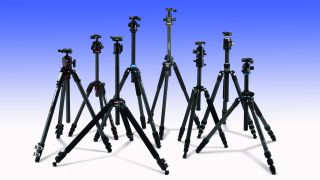 Carbon fiber tripods offer a solution to a perennial photographers' conundrum. For most photographers, the perfect tripod should offer solid support with a decent operating height, yet fold down small for stowing away – and  not be too heavy. Nobody wants to lug around more weight than they need to. Small, lightweight tripods that are easy to carry, on the other hand, can have a disappointingly short operating height, and can be comparatively flimsy.

Carbon fiber tripods offer a great solution – or at least the best possible compromise. When it comes to the choice of material for tripod legs and, in many case the center column as well, carbon fiber (aka carbon fiber) has distinct advantages over aluminum (aka aluminium). It’s impressively rigid yet lighter in weight to the extent that most ‘full-sized’ carbon tripod kits (including head) are about 20 per cent lighter than their aluminum counterparts.

Ultimately, you’re best off looking for a tripod that has the features you need and, with that in mind, we’ve picked out eight of the most attractive carbon fiber tripod buys on the market.

Very sturdy, rigid and robust – and it's quick to set up

$566.78
View at Adorama
Check eBay
See all prices (2 found)
Pivot mechanism for the center column is very quick and easy to use
Great value
Very stable
Heavier than some

The Manfrotto 055 is relatively large when folded, thanks to having three-section legs that don’t swing upwards for stowage. With maximum and minimum leg section diameters of 29/21mm,  the upsized 055 feels rather solid and the maximum load rating is an impressive 9kg. At just 2kg in weight (without optional head), it’s also the weightiest tripod in the whole group, and around 25 per cent heavier than most other contenders.

The 055 has clip locks rather than twist fasteners for the leg sections. The redesigned ‘Quick Power Lock’ clamps have a rocker action that’s strong but feels spring-loaded. A little care is needed to avoid pinching your fingers or fleshy palms when using them.

This tripod has a pivot mechanism for the center column that’s wonderfully quick and easy to use. Unlike some rivals, however, you can only use the center column in vertically upright or horizontal orientations. An Easy Link socket is built into the spider for fitting accessories, and a bubble level is also provided.

The 055 is very quick and simple to set up and it’s noticeably sturdier and more rigid than the Manfrotto's 190go!, especially with heavy combinations of DSLR bodies and telephoto lenses mounted on it.

Simple but highly effective: a classy tripod with excellent rigidity

With swing-up legs and pivoting center columns being featured increasingly in mainstream tripods, the Mach3 looks a very traditional affair. It has a very conventional layout of three-section legs that don’t fold upwards for stowage, and a basic height adjustment clamp for the center column that precludes any pivot facility. It’s therefore easy to write off this tripod as being somewhat basic, but the upside is that it’s superbly quick and easy to set up. Look a little closer, and you’ll see that it’s not short of smart features either.

A simple but effective locking mechanism enables use of the legs at three different angles to the center column, and there is a bubble level on both the tripod spider . For low-level shooting, a stub is supplied which can be swapped with the center column, and the kit comes complete with interchangeable rubber pads and metal spikes for the feet. For another bit of trickery, the leg that sports comfort padding can be unscrewed and used as a monopod, in conjunction with the removable center column and ball head.

The Mach3 is one of the most rigid tripods in the group, along with the Manfrotto 055 and the Novo, maintaining excellent stability even at its maximum operating height, with the center column fully extended. Adjustments of the leg sections and center column are silky smooth, and the B1 ball head works a treat. It features independent clamp and friction damper knobs, plus a pan-only release with a calibrated rotation scale and an Arca-Swiss type quick-release plate. All in all, the Mach3 is a simple yet highly effective tripod.

This Velbon outfit doesn’t even show off its carbon fiber legs, as all three of the upper sections are almost entirely shrouded in comfort padding. The two lower sections are released by clip-locks which are quick and easy to operate, as well as to adjust with an allen key if needed. Calibrated, numerical markings are printed on the two lower sections, making it easy to extend all three legs to the same length. The QHD-53D head also incorporates three spirit levels to aid levelling for both landscape and portrait orientation shooting.

Sliding levers on the spider enable easy selection of three available leg angles, and the rubber foot pads can be screwed in to expose retractable metal spikes. In other respects, the Velbon seems quite basic. Latter-day features like swing-up legs, a pivoting center column and a retractable leg for use as a monopod are all absent. Similarly, the ball head has a single locking knob with no independent friction adjuster or pan-release. At least the center column, which is made from metal rather than carbon fiber, has a two-section design. This enables you to unscrew the lower section for low-level shooting, with the legs set to their widest angle.

Good rather than great, the Velbon is reasonably rigid. However, its center column is unusually long and, when extended towards the top of its travel, it becomes quite prone to vibrations. The maximum load ratings of 4kg for the legs and 5kg for the head are the lowest in the group, and the tripod feels a little less solid than most competitors.

Manfrotto’s 190 series of tripods has been a bestseller for many years. The latest ‘190go!’ range boasts pro-grade status and is available in both aluminum and carbon fiber editions, and as complete kits with the choice of three-way or ball heads. They all feature four-section legs to help reduce stowage size and, unlike previous 190 tripods, they have twist locks rather than clip locks. The so-called ‘M-lock system’ is claimed to enable quicker setup up although, with nine clamps in total, it still takes a little longer than with three-section legs. On the plus side, they need minimal rotation to unlock and relock.

Four lockable leg angles are available instead of the usual three, and the 90-degree pivot mechanism for the center column is supremely quick and intuitive in use. Other design flourishes include an ‘Easy Link’ threaded socket on the side of the spider, for attaching accessories like an LED light.

While it folds down fairly small for a tripod that lacks swing-up legs, the maximum operating height of 159cm is the least generous of any tripod on test. With a diameter of 16mm, the bottom leg sections are also the thinnest, and resistance to flexing is less impressive than from the bulkier Manfrotto 055. Even so, the 190go! delivers good performance and versatility, as well as very speedy setup.

A great performer with an excellent pivot system

This Vanguard tripod kit stands out from the crowd, with a smart gunmetal grey finish for both the legs and head, rather than the usual black. It plays the numbers game with great success as well, with calibrated markings for rotation on the four-angle legs, and a 7-angle pivoting center column.

The tripod looks relatively slim and, indeed, the diameters of the three leg sections are quite modest at 26/23/19mm. However, the maximum load rating of 7kg for the legs should prove more than sufficient for the heaviest combinations of DSLR bodies and lenses.

With legs that don’t swing upwards for stowage, and have three rather than four sections, the tripod is quick and easy to set up. The same applies to the pivoting center column which, can be locked at various angles through a complete 180-degree arc. Another nice feature is that, as in the Manfrotto tripods, there’s a 3/8 inch threaded socket on the spider for attaching accessories like an LED light or microphone. Bubble levels are fitted to both the tripod spider.

Operation of the twist-locks for extending the leg sections is particularly good, with a quarter of a turn being all that’s needed for smooth movement or rock-solid clamping. The sliders for adjusting the leg angles are similarly well implemented, and the ball head is solid yet fairly compact.

Weighing in at 2.29kg, the Novo isn’t quite as heavy as some rivals but has a significantly greater maximum load rating of 20kg than most. The bottom section of its four-section legs is a fairly typical 21mm, but the top section is is a chunky 32mm. With swing-up legs, it folds down nice and small to 53cm, yet has a particularly lofty maximum operating height of 188cm.

Smartly turned out in black and silver, with a matching colour scheme for the head, the Novo certainly looks and feels like a quality item. Everything works with smooth efficiency and there are some smart design flourishes. The leg that features comfort padding can be unscrewed and used in conjunction with the center column and ball head as a monopod.

Resistance to flexing and vibrations is excellent. The twist-locks for the leg sections require minimal rotation for unlocking and relocking, and the same applies to the twist-lock for the extending center column. However, unlike most competing tripods, there’s no pivot facility for the center column. Instead, the tripod is supplied with a short stub that you can use for low-level shooting.

The best ball heads for your tripod