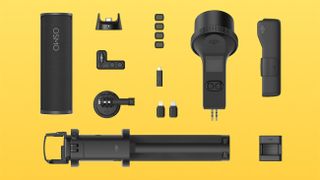 Looking for the best DJI Osmo Pocket accessories to boost this little camera's capabilities? This guide is here to help.

Launched in December 2018, the DJI Osmo Pocket is already regarded as one of the best action cameras out there. The little handheld camera has been a sensation despite its small size. Maybe that’s because it offers 4K video at up to 60 frames per second (fps) and 100Mb/s. Or perhaps it’s the built-in gimbal that makes smooth, stable video so easy for adrenaline junkies, filmmakers and vloggers. Read our DJI Osmo Pocket review for more info.

However, despite it becoming incredibly popular very quickly, the DJI Osmo Pocket is not the finished article. It’s a first-gen attempt and it requires a little careful accessorising.

Pocketable in might be, but every owner needs a few DJI Osmo Pocket accessories in their camera bag. Some of them are obvious, like high-capacity microSD cards to store its 4K video goodness, spare batteries to lengthen your shooting time, and a nice protective case. However, had you thought about mounting the DJI Osmo Pocket, or investing in a decent tripod to set it on while it’s performing its innovative motion time-lapses or night shots?

DJI itself has a fleet of accessories aimed at owners of the Osmo Pocket, but there are some third-party manufacturers that also make some essential gear, together with some more general off-the-shelf gadgets. In this guide, we present the ultimate DJI Osmo Pocket accessories you should have in your kitbag.

Kicking off our list of best DJI Osmo Pocket accessories is this charging cradle. If there’s one thing we don’t like about the Osmo Pocket (and, to be fair, all small cameras) it’s its battery life... or lack of. With a built-in battery rated at just 875mAh battery, the Osmo Pocket can only be used for around one hour before it runs out of juice. That’s for 4K video – though for full HD it only lasts two hours.

Cue this charging case, which packs a sizeable 1,500mAh punch that’s good for a full recharge with some left over. You can keep filming while it recharges, and as a bonus its insides can store two microSD cards, four ND filters and a couple of smartphone adapters.

An easy way to get creative compositions

Sometimes there’s just too much light for the DJI Osmo Pocket to cope with, so if you want seriously good images, consider investing in a Freewell All Day 8-Filter Set. This ‘all day’ filter set includes a circular polarizer/linear (CPL) filter to reduce the glare from snow, water and windows.

It’s also got ND4, ND8 and ND16 neutral density (ND) filters to darken images by two, three and four f-stops, respectively, which are useful for reducing the amount of light on the sensor. That means more creative long exposure shots, such as the classic ‘milky water’ shots of waterfalls, rivers and shorelines. The kit also includes ND8/PL, ND16/PL, ND32/PL and ND64/PL filters that combine the two.

The only way to shoot hands-free and time-lapse video

How do you shoot hands-free with the Osmo Pocket? Or make use of its intriguing built-in ‘motion time-lapse’ feature? You invest in an official Accessory Mount, that’s how. For any kind of camera not to have a built-in 1/4-inch tripod thread is disappointing, but that’s the case here. This official accessory mount fixes to the Osmo Pocket and allows it to attach to tripods, helmets, bike handlebars and, yes, selfie sticks.

If you’re serious about videography, it’s surely an essential add-on, though it’s the kind of basic functionality that should have been baked into the Osmo Pocket. It’s one of four products in the official DJI Osmo Pocket Expansion Kit.

A microSD card made for the outdoors

Prime
$23.33
View at Amazon
See all prices (2 found)
1 Amazon customer review
☆☆☆☆☆
Waterproof and shock-proof
Can record an hour of 4K video
More expensive than most

It’s always the thing you think about last when buying a camera, but decent memory cards are an essential purchase. Given that the Osmo Pocket is going to be used outdoors, the temperature-proof, shock-proof, waterproof and X-ray proof SanDisk Extreme is a candidate. This microSD card not only stores 64GB, but is also 4K-ready, with UHS Speed Class 3 (U3) and Video Speed Class 30 (V30) ratings. Since the Osmo Pocket shoots 4K/60fps video at 100 Mbps or 12.5MB/s, as well as slow motion video at 1080p/120fps, it’s worth getting a microSD card that can cope.

Perfect for editing videos on a big tablet

Although the free DJI Mimo app for smartphones has plenty of editing tools for videos and photos, and smartphones can be connected via Apple Lightning and USB-C for ‘live view’, for editing videos sometimes only a bigger screen will do. The iKlips miReader card reader deals in 4K microSD cards, and has both Apple Lightning and micro USB connectors. It’s best for those who want to view or edit their Osmo Pocket’s videos and photos on an iPad. It also supports the exFAT/FAT32 format, so can handle video files over 4GB. It’s available in black or white and in both 64GB and 128GB microSD card-compatible versions.

Next on our list of the best Osmo Pocket accessories is a BandC Red Micro SD card carry case. If you’re headed out on a long trip a Osmo Pocket in tow, particularly if you’re a vlogger, you’re going to bet through a lot of microSD cards. After all, it records video in 4K at 60 fps, and it chugs through storage; a 32GB card will store 30 minutes of video, a 64GB is good for an hour, and a 128GB card – still considered a bit of a luxury – only does two hours. This credit card-sized microSD card holder stores 10 in a separately moulded compartment, with a bonus area for a regular SD card slot. Just in case you’re still traveling with a ‘normal’ camera …

The killer app on the Osmo Pocket may well be its 3-axis mechanical handheld gimbal that soothes-out handheld video, but sometimes only a tripod will do. Ideal for creating a time-lapse or a motion time-lapse using the Osmo Pocket, the PIXI Mini is a great little tripod from Manfrotto that’s both tough and compact. Weighing a mere 190g, the PIXI has a basic but well-made ball head that can be locked in place using a simple push-button locking mechanism. Its soft outer also acts as a comfy handgrip for handheld videos.

Essential armor for those headed underwater

The Osmo Pocket is many things, but it’s not waterproof. That means that if you’re a diver intent on recording underwater you’re going to have to purchase a special diving case like the DJI Osmo Pocket Waterproof Case. Looking a little like a chubby nunchuck, its joystick-esque design acts as a housing that will keep your Osmo Pocket dry – as well as completely still – down to 60m. Crucially, there are inserts provided to make the lens anti-fog, while the housing also includes two buttons for controlling the camera. Also on the outside are two mounting brackets for other accessories.

Add filmmaking flexibility with precise control of the gimbal

A compact, secure case that expands

By now it’s pretty obvious that the Osmo Pocket, while impressive, is a mere starting point. You’re likely going to be buying a few accessories to get the best from it. The PolarPro Minimalist Case is compact and toughly made, with has protective cutout foam inserts to protect an Osmo Pocket, but also a few core DJI-made accessories: the Wi-Fi Module and the Controller Wheel. Given that installing the latter means removing the Osmo Pocket's tiny (and very easy to lose) Smartphone Connector, it’s good to see the PolarPro Minimalist Case also has a cutout for that. Equipped with a carabiner and a mesh pocket on the side, this case also has an expansion pouch that takes a PolarPro Filter Case.

How to wirelessly control the Osmo Pocket

Sigh. Here’s another product that you probably do need to consider despite its core features being the kind that really ought to be on the Osmo Pocket when you buy it. The Osmo Pocket doesn’t have Bluetooth or Wi-Fi? No, it doesn’t, and nor is this DJI-made Wireless Module particularly cheap. However, if you want to wirelessly transfer videos and photos to your phone, or remotely control the Osmo Pocket from your phone, it’s a must-have – you just pair it with the DJI Mimo app on your smartphone. As a bonus, it acts as a dock, not only keeping the Osmo Pocket steady but also presenting a USB-C slot to recharge it.

This is how you never run out of power

Since the Osmo Pocket only has an 875mAh battery and the official charging case is merely 1,500mAh, there’s only one way to ensure you never run out of battery, and that’s to invest in a third-party whopper of a portable battery. However, as well as storing 26,800 mAh of battery (over 25 recharges of an Osmo Pocket) the PowerCore+ 26800 power bank can deliver 5V/3.0A power via USB to drastically reduce charging time. Cabling up isn’t particularly convenient, but you can use the DJI Osmo Pocket while recharging it via its USB-C slot.

The best helmet camera for motorcycles, cycling and adrenaline junkies

The best camcorders in 2019