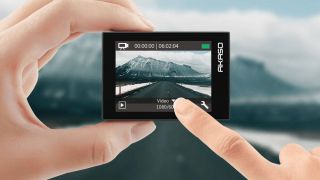 One time, toughened action cameras ready for whatever the outdoors or active bodies could throw at them came at a premium cost, despite otherwise modest specification and feature sets. Nowadays, with the market fairly saturated, a bit of shopping around and research will unearth models that can take the heat… without causing a meltdown of either the camera or your wallet in the process.

OK, so there will be a degree of compromise and level headedness involved in the purchase decision: you’ll be going for the less publicly recognized or acclaimed brands – as you won’t be bagging the latest and best GoPro camera for under $100.

However, considering you may well be strapping the camera to a surfboard, a bike or even your dog’s collar, then there will be extra peace of mind to be had from the fact that it hasn’t cost you a fortune in the first place.

However, you’ll naturally still want to make sure any action camera’s specification is sufficient to do what you want it to do. While cheap may be enticing, you don’t want to be actively throwing money away on an action camera that doesn't come up to scratch.

Consider therefore whether features 4K, Wi-Fi connectivity and/or a back screen via which you can compose and review shots and get instant feedback would be an advantage – or if you’re happy doing without such cost-adding features.

This upgrade of the 2016 EX7000 model sticks a ‘Pro’ suffix on the name and shoehorns in 4K shooting. In fact we appear to get a decent return for our cash as this model also features 16MP photos and two-inch touch screen. There’s anti shake too, albeit of the electronic variety, while waterproof housing enables it to withstand depths of 131ft (40m_ and a selectable diving mode allows users to compensate for a lack of red light for underwater scenes. Images are saved to optional microSD card, which is obviously an extra cost. Included in the box is a remote controller that can be strapped to your wrist, plus various mounts and tethering cables and the two lithium polymer batteries it requires. As the above suggests, Wi-Fi is included here, as is the ability to achieve time-lapse special effects, so in all this is an option worth further investigation.

$57.75
View at Adorama
$94
View at Tomtop WW
$119
View at Amazon
See all prices (4 found)
SJCAM phone app for the transferring (and  editing) of videos & photos
Larger screen than rivals
No 4K video

Pitched as a ‘sports’ camera offering 160° shooting, with a claimed unit weight of a mere 80g, this compact device features a 2.33-inch touch screen and a 14MP Panasonic made sensor, along with Wi-Fi and Ultra HD video clips of 1296P at 30fps.The connectivity option is useful, as there is also a downloadable SJCAM app that allows photos and video to be edited on via smartphone and immediately shared via social media. As with others of its ilk, the device boasts waterproofing to depths of 100 feet (30 metres) if using the supplied housing. Power comes courtesy of a 1000 mAh battery, claimed to offer an improved performance over previous models.

Prime
$69.99
View at Amazon
See all prices (2 found)
4K video clips,
Superb specification for the price
Requires use of the (supplied) case to be fully waterproof

An Apeman at a cost far, far less than a ‘monkey’, this is a step up from the A79 model in boasting 20 megapixel stills, 4K video and Wi-Fi connectivity, thereby matching the best of what’s on offer here for sub £100/ $100. Given the budget price, it’s incredible that the unit comes with 24 accessories including waterproof case allowing operation down to depths of 130 feet (40m), as well as HDMI output and the choice of four viewing angles: 170°, 140°, 110° and 70°. Factor in motion detection and built-in anti shake, and if you’re on a strict budget, you might well find yourself swinging for this smooth operating simian.

$19.99
View at Amazon
$29
View at Adorama
$29.99
View at BHPhoto
See all prices (12 found)
Fun design
Ultra compact
Can be attached to a multitude of objects
Inexpensive
No Wi-Fi,
Requires additional housing to be fully waterproof

Yes it looks like a miniaturized TV set as imagined by Austin Powers, or even like ‘Hal’ in Kubrick’s 2001. But for an almost pocket money price we’re getting a 6MP CMOS sensor device just 35mm in depth that eschews Wi-Fi but does feature a 124° wide-angle f/2 lens. With a magnet for mounting it to any metal surface, the Cube’s USB-charged battery promises an hour-and-a-half of interrupted fun.

Operated via just a single button, this iteration offers built-in stabilization, better low light capability plus sound recording. It’s no surprise at this low price that there’s no 4K video offered, but we do get the option of either Full HD or HD clips, plus a construction described as shock proof and splash resistant rather than waterproof, per se. With images saved to commonly used microSD card, this Polaroid is available in black, red or blue to match your moods.

Voice activation is great for vloggers and selfie lovers

Upgrading the earlier Brave 4 model, this latest iteration offers the ability to control the device hands-free using just your voice – barking out such commands as ‘Akaso – take photo’ or ‘Akaso – video start’. Once again we get built in image stabilization of the electronic variety, integral Wi-Fi and, here, the welcome ability to control the camera’s angle of view – selecting 170°, 140°, 110° and 70° according to the user’s needs. As one would expect ,the ‘Brave’ can also withstand a bit of water – here down to a claimed depth of 98 feet / 30 metres – and shoot 4K video in addition to 20MP stills. Further flexibility is added via a wireless remote control. In short, we’re getting a lot of bang for not much buck.

Comes with helmet and bike mounts

Prime
$28.97
View at Amazon
$29
View at Adorama
$49.99
View at Sears
See all prices (5 found)
Inexpensive
Supplied with helmet and bike mounts
Fairly low resolution stills and video
Can’t be used in water at a depth of more than three metres

Available in various body colors, this more conventional looking action camera from Vivitar ticks most of the boxes despite offering a fairly pedestrian level of specification that includes 5.1 megapixel images, video recording at a high definition 720P, plus waterproofing to a so-so depth of 10ft or three metres.

Keeping things simple, this unit comes with a lithium ion battery and charger, as well as a helmet and bike mount for capturing footage while on the move. While this camera may be fairly basic, it does manage to squeeze in a 1.8-inch LCD screen, while, like most in its class, images are written to microSD card.

Get the kids into moviemaking young with this fun action cam that is designed for use by kids as young as five years old. The basic camera specification is not much to write home about - shooting 720p video which just about qualifies as HD. And stills are a disappointing one megapixel. But this camera is all about the fun... and it makes getting action footage easy by being supplied with a waterproof housing, a floating handle and a clamp to attach the camera to a bike. The camera has a 128MB internal memory - but benefits from a investment in a microSD card so that you have plenty of room for clips.

Read more:
The best action cameras in 2020
The 30 best GoPro accessories
The best waterproof cameras
The best camcorders in 2020
The best travel camera
The best helmet camera for motorcycles, cycling and adrenaline junkies