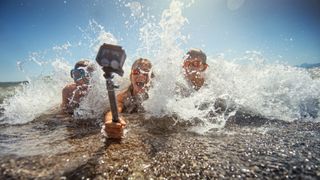 Want to know which is the best GoPro camera for you to buy? Well that all depends on how much you want to spend, whether you really need the latest tech, and whether you're ready for the next big thing – 360 imaging!

Canny video camera buyers have realized GoPro are not just for wild adventures, but are also among the best travel cameras around, not to mention the best waterproof and underwater cameras.

There are plenty of different Gopro models around, and choosing the right one can get quite confusing – which is why we're here! Like other camera makers, GoPro keeps older models on sale at steadily falling prices, so that while the latest GoPro Hero8 Black and GoPro Max have all the latest features, they are also the most expensive. At the same time, some of the older cameras can represent a fantastic bargain, with prices significantly slashed since launch.

So which is the best GoPro? It mostly depends on what you're looking for and what your budget is. We reckon that the Hero8 Black is now the best that's currently available, with its sophisticated HyperSmooth 2.0 image stabilization system. However, previous models from the Hero7 range are still available, and many can be picked up for a great price.

The other big story right now is the 360-degree GoPro Max, which is a huge step forward from its predecessor, the GoPro Fusion, in both ease of use and the results. You might also want to check out our guide to the best 360 cameras.

While there is a lot of competition out there in the best action camera arena, it's still the case that if you want the best, it's worth picking something with that GoPro trademark on it.

The ultimate action camera has got even better!

The latest flagship GoPro model is our favorite action camera available right now. A key difference from its predecessor (and especially the less expensive Hero7 Black) is that there are fold-out feet, giving you the advantage that the camera mount is now built in. Furthermore, you can accessorise the Hero8 Black with a new series of bespoke optional extras called Mods – we particularly like the Display Mod, which adds a second monitor that is perfect for vloggers, but there are plenty of others, including a Media Mod for improving the production value of your videos, and a Light Mod LED light too. These add-ons cost you more – but if you are looking for the very best action camera, and the best GoPro for image quality and features, then the Hero8 Black is it.

A genre-bending, category-redefining one-man-band of a camera, the GoPro Max is a significant improvement on the previous 360-degree GoPro camera, the Fusion, and brings 360-degree video into the realm of being a potential professional tool, rather than a gimmick. The Max shoots 5.6K video in all directions, offering a little less raw resolution than the Hero 8 but making up for it with plenty of other tricks: including four digital focal lengths, horizon levelling, HyperSmooth stabilisation and ProTune video editing software, to name a few. We've been really impressed with the Max in our initial tests, and we don't think it's an exaggeration to say that it could really change the look and feel of YouTube and vlogging in the near future.

While the GoPro Hero8 is out grabbing headlines, the Hero7 Black is still worthy of attention for its debut of HyperSmooth, an impressive new image stabilisation technology that brings a smooth, stable, flowing look to even handheld video. If that's a huge step forward, so is TimeWarp. A refinement of HyperSmooth, TimeWarp enables you to create a TimeLapse while walking around a scene, but also increase the speed by 30x for short, shareable and silky-smooth TimeLapse videos. It's enabled by a massive increase in the memory inside the GoPro Hero7 Black, which also gets a fresh new user interface. Add gorgeous video footage and the Hero7 Black is the current benchmark for action cameras, particularly if you're after the best 4K camera in action cam form.

With a new low price, this action cam is now great value

The younger brother to the Hero7 Black, the Hero7 Silver is still a current model, and has been reduced in price following the launch of the Hero8. Key difference between this and the Hero7 Black are that it lacks HyperSmooth recording, only offers 60fps in 4K shooting mode, and has a non-removable battery (so you can't carry a spare around with you). If you can afford the more expensive Black version then it's definitely worth doing so, as that HyperSmooth stabilization is a real game-changer, but if not then this makes for a solid budget alternative.

The cheapest Hero7, missing a fair few bells and whistles

The main thing the Hero7 White has going for it is the price. We have seen some great prices on this recently-discontinued model - and this means you can get a thoroughly decent GoPro camera at an budget price. There's no 4K and only the most basic stabilization (the Black edition's HyperSmooth stabilization gets nowhere near this model) but for learning the basics, it's a decent tool. Do some price comparison before you buy though; the Hero6 Black (see below) may be available for a similar outlay, and it does edge the Hero7 White in terms of video quality and a few other factors.

Though now eclipsed by the GoPro Max, the Fusion represents the first real departure for GoPro cameras. While Hero cameras have a single lens facing forwards to capture the action, the GoPro Fusion carries two wide-angle lenses facing in opposite directions, and with these it captures 360° images and videos of everything that surrounds it. What’s more, though, is the Overcapture functionality, which allows you to ‘pull’ 1080p Full HD videos from anywhere in the 360° frame, meaning you can effectively create complex camera moves and perspective changes from the same static shot, without once moving the camera. You can choose to shoot your 360° video in 5.2K 30fps or 3K 60fps, and you can capture 18MP 360° stills. It’s honestly bursting with features across the board, more than we have space for here, though it’s worth noting that it’s only waterproof to 5m, and isn’t compatible with the Super Suit housing to extend this. Otherwise, the Fusion is pretty over-specced for the average user, but it's still one of the best 360 camera options, even if it's not at the top of the list any more.