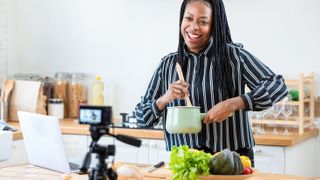 At the top of any vlogger's equipment list is choose the best YouTube camera that you can afford, and that works for thee type of video you want to shoot. Whatever kind of YouTuber you are, or aspire to be, having the gear that lends itself to easy creation and editing will set you up for success.

Cameras come in many shapes and sizes today: there are pocketable little waterproof cubes, ideal for bounding and leaping, like the DJI Osmo Action; smartphones with better optical zoom than many compacts, like the Huawei P30 Pro; mirrorless choices with flip-out screens for easy vlogging like the Canon EOS M6 MKII; and premium compacts that can capture sensational 4K, and which don't require you to change lenses.

We’re steering clear of cinema cameras and cameras for filmmaking in this guide, as these tend to be used different types of videomaker. However, YouTube now supports HDR content, so you can turn your uploads into mini, high dynamic range 4K masterpieces with a premium film camera like the Blackmagic Pocket Cinema Camera 6K.

Which option, or indeed options, you go for will come down to budget, and what type of video you want to make – if it’s rough and ready clips, with a focus on content over crisp quality, you might be able to get away with using your smartphone. Supplement any of the phones on our list with a Shure MV88+ mic and you can level-up your audio in a flash, and as these phones are able to capture 4K they aren’t exactly slouches in the video department, provided the lighting's right.

Speaking of resolution, 4K might not even be right for your audience, or the kind of video you want to shoot and edit. High-res capture takes longer to render, so if you need a quick workflow you may well decide to scale down to Full HD, which all the devices featured here can capture. Meanwhile, if you want to do everything on the fly, your phone is the perfect choice – the Samsung Galaxy Note 10 Plus is loaded up with a basic video-editing app, and software is available on the Google Play Store that lets you create a custom thumbnail in minutes.

One of the biggest bugbears vloggers and video makers have with Canon is the crop factor when shooting 4K on many of its cameras, but the G7 X Mark III bucks the trend – thank goodness. This high-end compact packs a similar body and an identical lens to the G7 X Mark II, but includes a new sensor and no 4K crop.

It was also the first camera of its kind with a microphone input – vital if you want clean audio, not to mention the ability to livestream straight to YouTube. This means that even if you’ve got an expensive cinema camera, if you also have a G7 X Mark III you can create a fuss-free live setup without any expensive capture cards and a PC.

With its flip-out screen, the G7 X III also gives vloggers a clear view of themselves when they shoot, and thanks to its 20.1MP 1-inch stacked CMOS sensor and Digic 8 processor it’s also able to capture great stills, so your custom thumbnails can pop nicely.

The Sony RX100 Mark VII looks virtually identical to its predecessor (the RX100 Mark VI, which is still on the market). But with the newer version you get a microphone input, not to mention a faster sensor packing Sony’s latest autofocus, complete with newly added eye-tracking.

With its articulating screen that faces forward and down, it’s excellent for vlogging, and with a nice, wide 24mm lens that goes all the way out to 200mm it delivers more versatility than the competition too.

A key differentiator for any YouTuber between the RX100 Mark VII and most of its competition is the maximum 4K capture time. While by default it captures a maximum of five minutes of 4K footage, jump into the settings and set the 'Auto Power OFF Temp' option to high and it can record for much longer – in excess of one hour.

Fuss-free YouTubing never looked so steady, or fitted so easily in pockets and hands. The DJI Osmo Pocket is effectively an all-in-one gimbal/camera combo capable of capturing up to 4K footage and 12MP photos with silky-smooth stabilization, despite being absolutely tiny.

It records onto microSD cards and has a small screen, so YouTubers and vloggers can frame their footage perfectly. If you need a bigger viewfinder it also connects to DJI’s app for iOS and Android, delivering even more granular control with the wireless adaptor, sold separately.

Out of the box there are undeniable limitations, which is unsurprising given the Pocket’s size. There’s no external mic input, the lens isn’t ‘action camera wide’, and there aren’t any mounting options for timelapse video, which the Pocket is capable of shooting.

Having said that, DJI has thought things through, and additional accessories open you up to a world of better audio, and even waterproofing if you're prepared to kit your Osmo Pocket out.

The original action camera brand, GoPro is still a YouTuber favorite, with a world-class flagship product that delivers excellent image quality and stabilization for die-hard action fans and globetrotters. It may be more expensive than the DJI Osmo Action, and lack a front screen, but the Hero7 Black offers a wider range of third-party accessories.

Also worth noting, in our experience, is that footage captured on it was a touch flatter than that from the DJI Osmo Action (below), and when recording long clips there’s isn’t any dropped audio, which we did experience with the Osmo Action. All this makes it preferable for color grading and editing, or for long bouts of capture.

In turn, DJI's more affordable option may be better for 10-minute clips that you can stitch together and fire into YouTube without much in the way of editing; the Hero7 Black, meanwhile, is the better choice for those who love editing as much as shooting. It’s also the only option if you want to stabilize your footage at a computer using third-party software like ReelSteady GO, which currently only works with GoPros, and which outperforms both GoPro’s HyperSmooth and DJI’s RockSteady.

DJI has managed to create an action cam that stacks up to the best out there when it comes to stabilization and picture quality, and thanks to its all-encapsulating ultrawide angle, it’s also the perfect vlogging camera for YouTubers – provided audio quality isn’t a priority.

Despite being the first of its line, the Osmo Action is already giving GoPro’s Hero7 Black (above) a run for its money, innovating in the action cam space with a front display that's very handy for framing.

While video captured on the GoPro is a touch flatter, lending itself to being edited – which means video professionals could well prefer it, the Osmo Action’s footage is a bit more YouTube-ready, and it warms up skin tones that bit more too.

It isn’t perfect – there are live view lag issues at max resolution when the camera’s RockSteady stabilization is active, while the app experience was also nothing short of terrible in our time with it. That said, if you’re looking for an action cam that’s going to give you maximum bang for your buck, the Osmo Action is it.

With its 32.5MP sensor, the Canon EOS M6 Mark II sports the highest resolution of any APS-C camera, along with the EOS 90D DSLR that was announced alongside it. It’s also the first mirrorless stills camera from Canon to capture uncropped 4K video, a boon for YouTubers who need a wide angle for vlogging. With Dual Pixel AF, it’s also a great choice for solo shooters who don’t have a camera person on-hand keeping everything looking sharp.

As with the original M6 there’s no viewfinder, which will suit YouTubers just fine, and the screen flips out, visible over the top of the camera. This isn’t much use if you intend on using the hotshoe for a shotgun mic, but if you have a lav mic for audio it’s a great setup.

With a microphone jack and a USB-C port it’s off to a good start from a connections point of view, and while Canon doesn’t have a wide range of lenses for the M6 Mark II’s EF-M mount, with the addition of an inexpensive adapter the camera can take EF lenses, although still with that APS-C 1.6x crop factor.

The Sony A6600 is the ultimate camera for anyone who wants to shoot video all day long with as little battery swapping or charging as possible. Its NP-FZ100 battery can record for in excess of three hours at a time – that’s three times as long as the video capture time of the Canon EOS M6 Mark II (above) and roughly five times as long as cinema cameras like the Blackmagic Pocket Cinema Camera 6K.

It’s also one of the first Sony A-series cameras to feature a fully-articulating screen, and while microphone ports are commonplace now, the A6600 also has a headphone jack, so you can monitor your audio.

While the A6600 is anything but cheap, given that it has in-body stabilization and can record unlimited 4K, if you’ve got the money and want the ultimate vlogging camera this could well be it.

Two years on and the Panasonic GH5 is still a firm favorite amongst YouTubers and amateur filmmakers alike – and it’s little wonder. Unlike the GH5s, the GH5 has in-body stabilization (5-axis Dual IS 2), but like the GH5s it can still shoot 10-bit 4K internally.

The camera’s autofocus has significantly improved since it launched thanks to software updates, and its slow-motion capture is also sensational, with speeds of 180fps in Full HD and 60fps in 4K.

With an articulating display that opens out to the side it won’t be blocked by a shotgun mic mounted on the hotshoe, so you can vlog obstruction-free, and it also has a full-sized HDMI-out, for easy-to-access clean video – perfect for pairing with an Atomos Ninja V, for example.

The Huawei P30 Pro is the only smartphone in our list with an optical zoom greater than 2x, getting you roughly 4.6x closer to your subject. Loaded up with four cameras – a number matched by the Note 10 Plus – it covers three focal lengths: wide, ultra-wide, and telephoto, while capturing images at up to 40MP, and can accurately detect depth thanks to a time of flight camera.

When it comes to vlogging, what really sets the P30 Pro apart is the rear camera, not the selfie camera. Thanks to that zoom, it’s a great travel vlogger’s phone, and its stabilization is very effective across photo and video.

As with the Samsung Galaxy Note 10 Plus (below), you’ll want to combine it with a Shure MV88+ mic to capture decent audio, but if you do, the versatility of its rear camera is still unchallenged, despite the phone launching in early 2019.

The Galaxy Note 10 Plus has one of the only front cameras capable of capturing 4K video, and it also features an onboard editing application which goes way beyond simple trimming

Thanks to its rear quad-camera, it delivers a versatile wide/ultrawide/telephoto setup, plus a time of flight camera for depth sensing. The quality of photos and videos are as good as it gets from a smartphone, especially when handheld thanks to excellent image stabilization.

The front camera, meanwhile, is also stellar. It features autofocus, which is missing from most selfie cameras, not to mention that 4K resolution capture at 30fps. Combine it with an external mic and good lighting and you can capture better-looking selfie vlogs than with any other smartphone on the market.