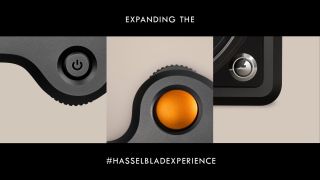 Hasselblad has started teasing the arrival of a new camera, with a countdown timer on its website ticking down to "to the next chapter of Hasselblad history" being revealed on 19 June.

Editor's note: This story replaces an earlier post about the supposed Hasselblad X1DX leak (which, as noted below, is now known to be a fake.)

There have been long-running rumblings that the company was set to announce a new camera, which is widely expected to be a successor to the the 50MP mirrorless Hasselblad X1D-50c.

Our first tip-off about the Hasselblad X1D Mark II came in February, when Hasselblad registered a new model  at the same time the original X1D was listed as discontinued by online retailers.

However, now the manufacturer's social media channels have gone into full-on tease mode ahead of this week's announcement, with abstract close-ups promising "The power of medium format in a portable, lightweight body. Compact. Powerful. Enhanced."

Iconic Scandinavian design, made for modern creatives and adventurers. Join us later this week for the next chapter of our legacy.See more: https://t.co/b6BN4sKcSt#HasselbladExperience pic.twitter.com/apnsIvkJgpJune 16, 2019

The rest of the internet wasn't nearly so coy. Mirrorless Rumors leaked the first image of the camera, which it claimed would be called the Hasselblad X1DX, along with some slivers of info. However, the site later confirmed that the image was a fake.

Along the purported information, though, was a detail that is quite likely to be true: that the new Hasselblad will use the same 102-megapixel Sony IMX 461 medium format image sensor that was recently seen in the Fujifilm GFX 100.

The use of this sensor in Hasselblad's next camera was widely anticipated ever since it was first revealed. It would mean that, on paper at least, the new camera would be capable of the same performance as the Fujifilm in terms of both stills and 4K video – which would, again in principle, be uncropped.

Whether or not the X1D Mark II features in-body image stabilization (IBIS), as the GFX 100 does, would be a key point – particularly since Fujifilm seems quite adamant that IBIS is crucial with a sensor as large and as sensitive as this one.

Assuming that the X1D Mark II does indeed feature a 100MP sensor, the big question is how Hasselblad will price the camera.

We'd be astonished if Hasselblad prices the its new camera in the same 30-grand ballpark as its DSLR counterpart, but we'd actually have to pick our jawbone up off the floor if it price matches Fujifilm. We'll only have to wait a few days to find out.

Either way, it looks to be a good – if expensive – time to enter the world of mirrorless medium format.