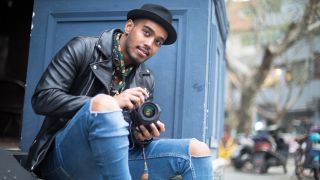 Picking the best camera for street photography is something we could debate all day. There are loads of great camera models out there with features suited to the particular art of street photography, and which one you end up choosing will depend on your individual needs and tastes.

You can sort through the best mirrorless cameras and best compact cameras all your like, but only some of them will be suitable for street photography, so which should you choose?

But before we get into it, let’s define our terms. What is street photography? It largely refers to the art of candid photography of people and their environments, mostly urban ones. It doesn’t have to contain people, though it usually does, and it doesn’t have to be set in the bustle of a city, though it usually is. A street photographer is an observer, someone who lives to capture the unposed moment. Their images may not always be technically perfect, as they are reacting, capturing on the fly, but they will always be real. Look at the work of Garry Winogrand, Henri Cartier-Bresson, Vivian Maier or Daido Moriyama, to name very, very few. That is street photography.

So what does a street photographer’s camera need to look like? Well, something small and unobtrusive is a good start, so it doesn’t draw too much attention from your subjects. It should be fast and responsive, both in terms of autofocus and burst shooting, so that the clinching moments don’t get away from you. Its controls should be intuitive and well laid out, so you aren’t missing moments by hunting through menus. Something that’s not too heavy is also a plus if you’re going to be roaming the streets looking for shots all day.

There are also different camera types to consider, and we’ve split up our guide to reflect that. First we’re dealing with fixed lens compacts, then we’re moving onto mirrorless cameras – you can find more details on each type below.

The last factor we’re taking into consideration for our street photography list is style – because, after all, street photography has such a rich tradition in the history of photography. We like cameras that evoke that classic journalistic style, and not just because of the way they look, but because they were designed with that kind of shoot-from-the-hip philosophy in mind.

So let’s get to the cameras!

When picking a compact camera for street photography, it pays to make sure the lens is somewhere around the mid-range, neither too long nor too wide. Whether this is a zoom or a high-quality prime, it also pays for the lens to be fast (i.e. have a large maximum aperture) so that you can use high shutter speeds as much as possible.

In Cartier-Bresson’s day, it was unthinkable that a powerful camera could be so small it’d slip into a jacket pocket, but so it is with the Canon PowerShot G5 X Mark II. An excellent all-around compact, the G5 X Mark II improves on its predecessor with a fast 5x zoom lens that covers an equivalent focal range of 24-120mm – perfectly pitched for street photography. The customisable control ring on the lens can be set to the user’s preferred function, allowing you to fine-tune the handling to your preferences, making shooting with the G5 X II as intuitive an experience as possible.

A compact that delivers exceptional images with a classic focal length

Bags of style, backed up with serious imaging tech – the Fujifilm X100V has it all. The fifth in a line of prime-lens compacts, the X100V eschews zoom range in favour of a catch-it-all focal length and supreme image quality. One of the most enjoyable cameras that’s ever been made, the X100V has evidently been put together with street photographers in mind. Its dial-based controls hark back to the old days of street photography, while its hybrid optical/electronic viewfinder is one of the best examples of its type on any mirrorless camera, full stop. All of this does come at a price, but if you can justify the expense, it’s worth it.

The Four Thirds sensor of the Panasonic Lumix LX100 II is interesting in a number of ways. For a start, it’s a multi-aspect sensor, allowing you to quickly switch between different aspect ratios of images. The camera’s controls also make this easy to do, which encourages experimentation with different types of composition. The Four Thirds sensor is larger than those you’d find in many comparable compacts, which makes it easier to produce images with a shallow depth of field – a task further aided by the maximum lens aperture of f/1.7. This makes the LX100 II a really great choice for street portraiture, allowing the user to capture dynamic images that really pop.

Like Crossfit, four-hour board games and The Rocky Horror Picture Show, the Ricoh GR cameras have acquired something of a cult following. Their fans will extol, to anyone who’ll listen, the virtues of their slim build and large sensorr, a feature combination does make the most recent model, the GR III, a great option for street photography, so much so that it even comes in a dedicated “street edition” with a pop-on viewfinder and natty yellow stripe included. And with impressive features like three-axis image stabilization, a high maximum ISO of 102,400, and a lean start-up time of just 0.8sec, the GR III has the imaging cred to back up its looks.

A tiny, multi-faceted powerhouse, but expensive unless you need it all

A camera doesn’t get seven iterations unless the idea was good to begin with, and the Sony RX100 VII is the latest in a line of terrific tiny compacts. Pairing a 24-200mm equivalent Zeiss-engineered lens with an extremely sophisticated autofocus system and enviably fast burst shooting is a winner in anyone’s book, and all this makes it right up the alley of any street photographer. All this tech doesn’t come cheap however, and one could argue that the RX100 VII is a wee bit aggressively priced for a camera of its size (and sensor size). The good news, though, is that if the asking price is too dear for you, the preceding RX100 models are still largely in production, so by all means have a look and see if one better suits you (our RX100 comparison guide may come in handy there).

If you’re picking an interchangeable-lens camera for street photography, we’d recommend a mirrorless camera over a DSLR – they tend to be smaller and faster, both of which are a plus. You want something with a decent range of fast lenses – we’ve got you covered with our five top picks.

Fast and responsive, this is Canon's latest EOS-M model

If you’ll pardon our French for a moment, the EOS M6 II represented the kick up le backside that the EOS M series desperately needed, and for its price it’s one of the best Canon cameras and mirrorless cameras around. Pairing a seriously impressive APS-C sensor with super-fast burst shooting and a beast of an autofocus system, this pocketable camera is more than just suited for street shooting, it excels at it. And given that it’s packing more megapixels than the majority of Canon bodies, it’s also a great choice if you’ve one eye on printing your images big.

For the pure, unadulterated street experience, this is the best you can get

Let’s be honest – shooting with modern, screen-equipped cameras is nothing like the street-photography experience of decades gone by. Fujifilm, in a stunning display of daring, used its X-Pro3 to push back at this a little, designing a modern digital camera designed to be used like a classic rangefinder. Its “hidden” fold-down LCD is designed to discourage “chimping” and keep you in the moment, and while you have a choice between a modern EVF or an optical-style rangefinder, it’s clear which one Fujifilm would prefer you use. All this presents a pretty steep learning curve, but when you master its quirks, shooting on the X-Pro3 is a transcendental experience.

The last word in effortless street style and cool – at a price!

Stripping back almost everything but the core rangefinder experience, Leica delivered its consumer base exactly what they were looking for. You won’t find any autofocus on the Leica M10 – it’s a pure rangefinder, which certainly takes some getting used to, but is an incredibly satisfying image-making experience if you take the time to master it. The images look terrific too, and Leica hasn’t forgotten a few modern bells and whistles like Wi-Fi connectivity for quick and easy image sharing. If this happens to be in your budget range, then we’re extremely jealous. And you’re going to love it.

Tremendous value for money, and a good future investment system

A perfect choice for those tempted by Nikon’s full-frame Z system but a little put off by the price of the cameras, the Nikon Z50 seems to have been priced with forensic precision to undercut its main APS-C rivals. It’s also stuffed with features, so while you don’t get full frame, you do get a whole lot else – a generous AF system, wide dynamic range, solid high-ISO performance and more. While the Z system of lenses is relatively new, it promises to expand greatly in the future, and this makes the Nikon Z50 even more of a bargain at its current price. By all means, get in on the ground floor.

The Micro Four Thirds system has its sceptics, with many photographers spurning the cameras for their small sensors (compared to APS-C), but the Olympus OM-D E-M5 Mark III is a triumph for the entire line. That mount gives you access to loads of lenses from Olympus, Panasonic and more, and the camera itself is a lightweight but powerful tool with a huge range of features. It’s got weather-sealed construction, super-fast Pro Capture mode, seriously impressive in-body stabilisation, and plenty more. It’s the kind of camera that’s a lot of fun to delve into a get to know – it feels like you’re always discovering something new about it.