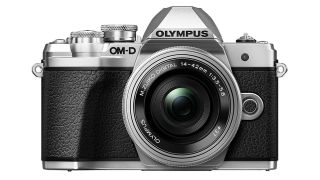 The model is the first in the third generation of Olympus OM-D models, and the first to be announced since the flagship OM-D E-M1 Mark II unveiled last year.

The new model is based around a 16MP Live MOS Micro Four Thirds sensor and TruePic VIII engine, the latter of which features in the flagship OM-D E-M1 Mark II.

Another feature inherited from the OM-D E-M1 Mark II is 4K video. This is only the second time we've seen this on an Olympus camera, and although its functionality isn't quite as extensive as it is on that model, it's delivered at a much kenner price point here. The user can record video at 30, 25 and 24fps options, with IPB compression recording at 102Mbps.

The processing engine also allows the camera to offer 8.6fps burst shooting when set to S-AF, and also supports a new dual-mode Bleach Bypass Art Filter option that joins the a handful of previously seen treatments.

The camera also gains a five-axis image stabilisation system that claims to provide correction for up to four extra stops over an unstabilised setup.

Olympus has fitted the model with a 2.36million dot OLED viewfinder, while the 3in tilting LCD on the back of the camera also responds to touch, which means it can be used to set the autofocus point. There's also a new shortcut button next to the power switch to provide access to a handful of key options.

The familiar Live Time and Live Composite modes also feature, and these are now rounded up with others, such as Multiple Exposure and HDR, under a new Advanced Photo (AP) option on the mode dial.

Built-in Wi-Fi, meanwhile, allows for images to be transferred to smart devices with ease, and also for the camera to be controlled through a phone or tablet, while the single card slot accepts SDHC and SDXC cards up to the UHS II standard.

The Olympus OM-D E-M10 Mark III will be available from the middle of September, and will follow previous OM-D models in being offered in a choice of black and silver finishes.

Potential purchasers looking for something more compact will also have the option of a second kit, one that includes the M.ZUIKO DIGITAL 14-42mm 1:3.5-5.6 pancake optic. Olympus has set a price of £699.99/$800 for this setup.