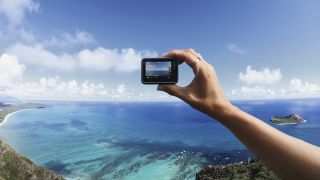 Action-camera company GoPro has confirmed reports earlier in the month of a new HERO model, one that will retail for a penny under £200 in the UK and $199 in the US.

Aiming to be the best action camera for "kids, adventurous social sharers and travel lovers," the GoPro HERO captures video at a maximum 1440p resolution, with a 1080p (Full HD) option alongside.

Footage also benefits from stabilisation, while stills can be captured at a maximum 10MP, and you can capture everything down to a depth of 10m underwater without having to worry about using any housings.

The new model boasts the same Voice Control functionality that we've seen on its more senior HERO5 and HERO6 siblings, which allows the user to use vocal commands to instruct it to turn on and off, and start recording footage among other things.

Around the back, GoPro has furnished the new model with a 2in touch display, and it's possible to mount it on your body or equipment with over 30 accessories. It's also compatible with the GoPro smartphone app, which allows images and videos to be shared with smart devices with ease.

The model is the first release since GoPro announced it would be closing down its drone business, following the troubled launch of the Karma model.

The GoPro HERO is available now.