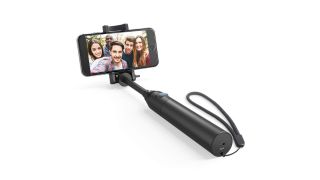 The best selfie sticks, you won't be surprised to learn, are not the kind you buy off the street near a tourist trap. These tend to be pieces of flimsy plastic garbage that will tip your camera phone into the Seine the first chance they get. If you've gone to all the trouble of getting the best action camera or best 360 camera, DON'T fix it to the end of a wobbly selfie stick.

With a little research, you can pick up one of the best selfie sticks on the market and enjoy not only a secure hold on your device but also extra features like Bluetooth functionality or even the ability to convert into a tripod. The best selfie sticks are multi-functional, and we've packed this guide with them. They don't tend to be expensive either, and often you'll end up paying less for a sophisticated stick online than you would for a basic one on the street!

We've divvied up this guide into different sections depending on your needs: you may be looking for a selfie stick that not only holds a phone but a camera too, which is an ideal setup for vlogging. We've started our guide with these, as they tend to be the best and most sophisticated sticks around, but have also included some sticks for phones only as they are generally cheaper.

We've also included some GoPro sticks for the action lovers among you, and let's not forget about 360-degree shooting! Selfie sticks can be hugely useful for this type of shooting, so we've included a couple of options suited to 360-degree cameras as well.

So, without further ado, let’s get started!

The best selfie sticks in 2020

Multi-functional, with Bluetooth and a remote

Converts to tripod
Huge battery
Bluetooth
Not much!

Stable, durable, equipped with a 65mAh rechargeable lithium battery that can capture up to 50,000 selfies from full charge... the SYOSIN Selfie Stick Tripod does pretty much everything you could ask for from a product like this. As the name implies, it can also convert into a quick, cheap and cheerful tripod for getting stable shots, and it can support action cameras and small mirrorless/DSLR cameras thanks to its tripod mount. Bluetooth functionality is present and correct, and the stick also comes with a wireless remote. Pretty much perfect!

Packing a tripod screw mount and a useful fill light

Any photographer knows how useful a little fill light can be in a pinch, and this is just as true for travel selfies and vlogs as it is for studio portraits. Meet the MPOW Selfie Stick Tripod 3 in 1, which is well as being a useful selfie stick is also a handy portrait aid, sporting a handy built-in fill light to help keep your exposures clean and pretty. Control for the light is built into the handle (short press to adjust brightness, long press to switch modes), while the stick also comes with a Bluetooth remote, which is extra handy if you choose to convert it into a mini tripod. Very much a “do everything” tool, this stick even offers a screw mount that will take lighter cameras.

Selfie sticks are outdoorsy things by nature, and if you’re going to head off travelling with one, it make sense to get one that can stand up to the elements. Selfie World’s weatherproof, lengthy stick is just the thing, compatible as it is with smartphones, GoPros and regular cameras via its multiple mounts. The quick release clips allow you to get it from full retracted to full extension in seconds, with a secure hold that protects your photographic devices from being dropped. A Bluetooth remote is also thrown in for good measure, and there’s even a nylon carry-bag.

An affordable stick with plenty of features, for phones only

Stowing down to just 18cm, the MPOW iSnap X works with pretty much any iOS or Android phone you’d care to name, and comes with its own Bluetooth remote that has a built-in Li-Ion battery for quick charging and long-lasting operation. A useful wrist strap on the end of the handle makes the stick more secure when you’re on the move, and the 270-degree adjustable head means you’re sure to always find the best angle for your shots. For the price, MPOW is offering a lot of selfie stick here, and it’s a really solid pick for budget-conscious travellers.

Short and sweet, this selfie stick is ultra-portable

Reasonable price
Packs down to 5in
Lower extended length
Phones only

Retracting down to just 5 inches (12.5cm), the JTWEB Bluetooth Selfie Stick Mini can easily be carried in a pocket or handbag. Thankfully that doesn’t mean that the makers have skimped on quality – the construction of this stick is all-metal, with treated surface that means it doesn’t have the plasticky feel of so many cheap sticks on the market. As you might expect, the short retracted form factor of this stick means it’s also not one of the longest-extending on this list, but its maximum length of 50cm is still decent enough for most purposes. Bluetooth control is a welcome addition as well, and it’ll pair easily and quickly with most iOS and Android smartphones.

65mAh battery
Converts to a tripod
Phones only

Given that they’ve managed to jam a 65mAh lithium-ion battery in there, it should come as no surprise that the Blitzwolf Selfie Stick Tripod can power its Bluetooth functionality for a long time. The makers claim you could theoretically get 50,000 selfies out of it before needing to recharge, which should be enough to satisfy even the vainest amongst us. It also offers complete 360° rotation of the phone, ensuring you can always get the perfect angle. With an aluminum construction and the ability to convert into a mini-tripod with non-slip legs, Blitzwolf’s selfie stick does almost everything you could want from a selfie stick – the only thing it’s missing is a camera mount.

A foldable 3-in-1 arm tailored especially to GoPros

While you may not have been expecting GoPro themselves to get into the selfie stick game, in truth the 3-Way Arm is more than that. It also functions as a simple handheld grip and as a static tripod, and when it’s in selfie stick mode, the fact that its arm folds rather than collapses straight down means that it’s possible to arrange the stick at such an angle where you can capture your selfie without getting any of the shaft in the shot, even with the wide-angle lens characteristic to GoPro Hero cameras. If you don’t mind spending a little more, this waterproof arm is one of the best GoPro tools to augment your GoPro shooting.

A cheaper option for GoPro selfies

Alternatively, if you don’t want to spend a chunk of cash on a selfie stick for a GoPro, there’s this more affordable option from MyArmor. As you’d hope from a GoPro selfie stick, it’s fully waterproof, and it also comes with a useful wrist strap to prevent you from losing it to an unexpected wave. The rubber grip is both comfortable and secure,though it’s worth noting that this is one of the shorter sticks in this round-up, and lacks any kind of Bluetooth functionality for remote triggering. Still, it has its one job, and it does it well. A solid choice for budget-conscious GoPro owners.

While a selfie stick may seem like the ideal choice for shooting with a 360-degree camera, you do run the risk of the stick creeping into shot. That's why Insta360's 'invisible' selfie stick is so good: the algorithms of compatible cameras are set to automatically detect it and remove it from the shot, ensuring that it doesn't interfere with your 360-degree panoramic images and videos. If you're a user of one of Insta360's cameras, which are among the best 360 cameras in the business, it's a no-brainer to pick this stick up.

Manfrotto gets in on the action

Broadly compatible with any 360 camera that weighs up to 1kg and has a tripod mount, Manfrotto's VR selfie stick is gorgeously made and highly durable. With a minimal footprint that reduces the amount the stick will creep into the shot, the stick also boasts four aluminium sections and an optional ballhead. It's more expensive than the other products in this guide, but you really do get premium quality for your money, and any 360 camera user will get a lot of use out of this.