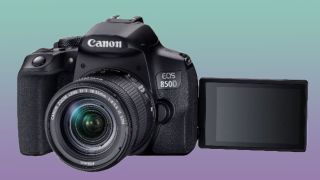 Update: More images of the Canon EOS 850D and the Canon Rebel T8i have been leaked, showing off the camera's versatile vari-angle LCD screen. The rumored specs include a 24.1MP sensor, a DIGIC 8 image processor and 45 AF points (all cross-type).

After the Canon EOS R5 and Canon EOS R6 leaks, you would be forgiven for thinking that there would be no further excitement in the same 24-hour period. However, when it rains, it truly does pour. Images and specifications of the upcoming Canon EOS 850D (named Canon Rebel T8i in North America) have also been leaked, showing us an intriguing glimpse into Canon's next APS-C DSLR.

The Canon EOS 850D / Canon Rebel T8i will be a follow-up to the Canon EOS 800D / Canon Rebel T7i, which we reviewed as offering "little to complain about" with its versatility and good image quality. We were impressed by its AF performance and well-implemented touchscreen, but were frustrated by the cheap-feeling build and a lack of 4K video. We also found the original price point a little frustrating, as it was quite expensive for a beginner's camera.

So, will the Canon EOS 850D / Canon Rebel T8i improve on its predecessor's technical prowess and build? Well, according to the rumors reported by Canon Watch, the Canon EOS 850D / Canon Rebel T8i will have a 24.1MP sensor, which is actually a very slight step back from the 800D's 24.2MP sensor. However the 850D will have a DIGIC 8 processor, compared with the 800D's DIGIC 7.

The Canon EOS 850D / Canon Rebel T8i will have all-cross 45-point AF and Dual Pixel CMOS AF. Plus, in contrast to the 800D, this upcoming DSLR will be able to shoot 4K video at 30p without cropping. The 850D / T8i will also offer continuous shooting at about 7fps (7.5fps in Live View).

Similarly to the previous model, the Canon EOS 850D / Canon Rebel T8i has a three inch vari-angle LCD screen. However, it looks as if Canon has been able to shave off some weight from the 850D. The previous model weighed in at an already-dainty 532g (body only with battery and card), whereas the 850D will apparently be 515g (including battery). Whether this means that the build will be as 'cheap-feeling' as the 800D remains to be seen…

If you can't wait to get your hands on the upcoming Canon EOS 850D / Canon Rebel T8i, you might not have long to wait. Apparently, the 850D could be announced as soon as February 2020. In the mean time, we'll be keeping a keen eye out for any further details.

Camera rumors in 2020: what cameras are coming, and what to look out for!
Best Canon lenses in 2020: go longer, wider and closer with your Canon camera
Best cheap Canon camera deals in 2020: get the best prices on Canon gear