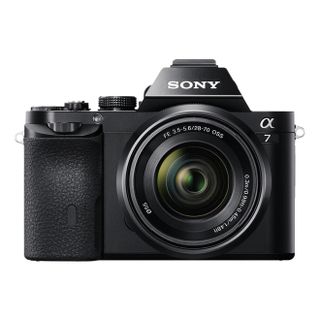 If you were tempted by Amazon’s ridiculously good Sony A7 deal back on Prime Day but missed your opportunity, fear not: you have another chance.

These are two amazing deals for anyone who want to step up to a full-frame or mirrorless camera – but they're only available until 11:59pm tonight (or as long as stocks last).

The bargains come as part of Amazon UK's biggest-ever August Bank Holiday sale. Running from 22-29 August, the eight-day event will see great discounts on a wide range of items, from consumer electronics and Amazon devices to school bags and stationery.

The sale is open to everybody, but Amazon Prime members – and anybody signed up to a free 30-day Prime trial – will benefit from a 30-minute early access period to all Lightning Deals. These are quick-fire offers where products become available at a discount, in limited quantities, for limited period of time.

The Sony A7 was the first full-frame compact system camera on the market. And although it’s been superseded twice now, the fact that Sony’s kept it available for all this time shows just how relevant it remains.

While it lacks some competitive features, such as touchscreen functionality and 4K video, its 24.3MP Exmor CMOS sensor continues to produce excellent Raw images. The Sony A7 is a fantastic first-time full-frame buy for anyone on a budget, and it’s a great candidate for a secondary body, too.

Deal subject to availability, cashback claimed via Sony post-purchase and subject to T&Cs

Deal subject to availability, cashback claimed via Sony post-purchase and subject to T&Cs