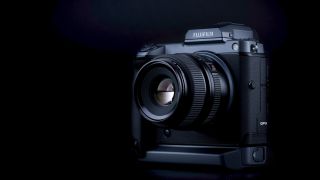 It has been a busy week for camera news - but announcements don't come much larger than the unveiling of the Fujifilm GFX 100 - which got launched in Tokyo on Thursday.

Elsewhere, it has been a worrying week for Huawei – with Google redrawing full support for its Android phones - but that didn't stop its Honor brand bringing out a rather nice looking new camera phone.

Here are our top five stories from the world of cameras and photography this week:

Going on sale from the end of June for $9,999 / £9,999, this third camera in the GFX range offers much more than a doubling of megapixels.

In almost every way, the 102MP GFX 100 improves on the specification found on the existing GFX 50S and GFX 50R cameras in the Fujifilm G-mount medium format range. Autofocus, image stabilization, burst shooting, videography and more have all been improved by the use of a new processor that is four times faster, with a data rate of 1 GB/s.

Sony’s top investors, executives and analysts joined each other for a conference call recently to hear the latest financials, So far so routine, but one thing that stood out was the revelation that Sony has apparently surpassed Nikon global interchangeable-lens camera (ILC) sales. It is now number two in the combined DSLR and mirrorless camera market - behind Canon.

The world’s second-biggest smartphone maker will have its Android access restricted, following its blacklisting by the Trump administration. We report on what this means for the manufacturers of some of the best camera phones out there (although it didn't stop its Honor brand launching the exciting new Honor Pro 20 handset this week).

It’s an exciting time to be a Canon EOS R early adopter, as Canon is hard at work filling out the lens line-up for its new full-frame mirrorless system. While we don’t have anything confirmed as of yet, the camera rumor mill is abuzz with potential specs and details of upcoming lenses for the system, and it seems that the scuttlebutt at the moment is indicating we’ll see three new lenses in early 2020, possibly at or before CP+ in Tokyo, which happens in February. The individual models of lenses are rumoured to be as follows: a 24mm f/1.4, a 135mm f/1.8 and a macro lens of unspecified focal length.

Ricoh executives unexpectedly announced that they expect that the excitement over mirrorless will fade in the next couple of years - with photogrphers returning to DSLRs, including its own Pentax range.

Read more:
• The 50 best photographers ever