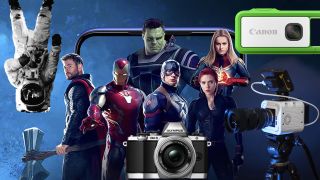 We're not sure what was most surprising this week – seeing the biggest camera manufacturer in the world launch a crowdfunding campaign, having the original 1969 moon landing photos reissued, or seeing a superhero-themed camera phone!

It's certainly been eventful, if nothing else – especially with leaked information about two highly anticipated new cameras from both Nikon and Olympus.

Prepare to alert mission control that all systems are go, as we hit the T minus five countdown to the biggest camera news stories of the past week…

Hasselblad has reissued its 1969 press release and photographs of the first moon landing, to commemorate the 50th anniversary of the historic event.

It was, of course, the company's leading medium format cameras that were included in Apollo 11's payload to document mankind's first footsteps on the moon.

"Hasselblad proudly celebrates its role in being the cameras that were chosen by NASA for space photography, and even more so, the cameras that documented the historical moment of the first men on the Moon," said the company…

Two of the marketplace's most anticipated cameras have been outed by industrious leakers and even the manufacturers themselves.

The Nikon D6 is apparently already in testing, and is being prepped for a 2020 release – just in time for the Tokyo Olympics. The new flagship could be revealed at Japan's CP+ in February, and is said to feature some "mirrorless features" including image stabilization…

And it looks like the Olympus OM-D E-M5 Mark III will finally be announced in August, four and a half years after its predecessor, according to a new camera registration and an upcoming Olympus press event…

In an intriguing development, Canon has turned to a crowdfunding platform for its latest camera, the Canon Ivy Rec – a weatherproof, wireless, wearable outdoor camera.

Described as "the ultimate go-anywhere camera: clippable, lightweight, compact, and rugged – designed to go where the moment takes you", the Canon Ivy Rec has no screen or traditional viewfinder and looks like a slightly larger USB stick.

Its 13MP 1/3-inch CMOS sensor takes stills and 1080p video up to 60 frames per second. With no screen to review images, it uses Bluetooth and a new mobile app – the CanonMini Cam App – to transfer files wirelessly…

British-based Octopus Cinema has announced the development of the Octopus Camera – a 4K and 5K cinema camera built on an open platform with fully removable and upgradable parts, including the SDK and the sensor itself.

Rather than limiting itself to a specific sensor or sensor manufacturer, the Octopus Camera supports a variety of sensor modules. The prototype is targeting a pair of modules from Ximea: the CMV20000 full-frame sensor and the Sony IMX253 1.1-inch sensor.

Both sensors feature global shutter, color and monochrome configurations and at least 12 stops of dynamic resolution (the Sony goes up to 12.5), with 4K up to 30fps, 3K up to 60fps and 2K up to 120fps via 12-bit Lossless Cinema DNG…

If you're feeling down that Avengers: Endgame waved goodbye to some of your favorite Marvel superheroes, fret not; Xiaomi has revealed the Redmi K20 Pro Avengers Limited Edition camera phone to honor Earth's mightiest heroes.

The device features the same core hardware as the regular Redmi K20 Pro, which means that it's packing a triple-camera array comprising a 48MP, 13MP and 8MP sensor, along with a 20MP pop-up selfie camera, and is powered by Snapdragon 855 processor and 4,000mAh battery with a 6.39" screen.

Unlike the decidedly non-mighty versions, however, which come in Glacier Blue and Flame Red colorways, the Redmi K20 Pro Avengers Limited Edition comes with a sleek non-gradient black. If that doesn't scream "AVENGERS ASSEMBLE!" loud enough for you, however, the package also includes a bright blue rear case with the Chinese logo for Avengers: Endgame (or Avengers 4, as it is known in that territory).

Some of our recent Buying Guides:

The best photography books for beginners and pros
The best camera sliders
The best tripod: take sharper shots with the right base