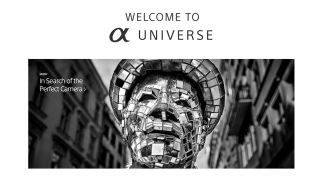 Sony has launched a new hub site intended for users of its cameras.

The Sony α Universe Europe has been designed to showcase European photography, although it's also set to feature a range of other content that should interest users of the company's models.

These include features and profiles on Sony's Imaging Ambassadors, as well as how-to guides, competitions and news on Sony's various products.

The site also looks set to have a focus on video, with competitions that should entice both established videographers and photographers who are able to capture video footage on the cameras, while a range of upcoming events involving Sony's Imaging team have already been posted too.

“In the last few years, Sony has changed the game in terms of what is achievable in photography and the launch of Sony α Universe Europe represents the next step in our strategy to help customers maximise the possibilities of their Sony kit,” said Yann Salmon-Legagneur, Director of Product Marketing, Sony Europe. “We want to de-mystify a range of photographic techniques and inspire photographers to try out new things whilst being guided by some of best photographers in the world.”

Sony took over the imaging arm of Konica Minolta in 2006. Since then, it has become a dominant player in the interchangeable-lens camera market, with its mirrorless models stretching from entry-level cameras through to full-frame professional models and video-centric offerings.

The site is already live, and is now available in 22 languages. To see it for yourself, head here.